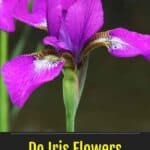 Due to their surprising variety, it’s easy to run into a range of mysteries when growing members of the genus Iris (EYE-ris).

These classic plants have six subgenera and two different rooting methods, such as:

Some prefer boggy soil (Lousiana Iris and Yellow Flag) while others prefer dry—some bloom in summer, some flower in winter.

And while most form clumps, some like to wander.

One of the most curious phenomena about irises is how some suddenly change bloom color.

While this is common in some plants, it’s something so uncommon in irises that the question must be asked:

In short, there are no known species or cultivars of the iris that can change bloom color.

Yet, there are many circumstances in which the color may be affected.

The following can all cause the flowers to fade or become discolored:

Once discovered and addressed, the plant will usually return to its previous hues in the following blooms.

There are two kinds of hybridization in plants:

The term cultivar is an abbreviation of “cultivated variation.”

It refers to plants intentionally cross-bred to produce the desired result.

Variants occur naturally and show up in long-abandoned gardens and the wild.

They’re created when bees and other pollinators carry the pollen of one species to another, and the plant reproduces.

Over time, these natural hybrids can become stable to the point their seeds can produce the parent plant.

When this happens, they get reclassified as a new species.

When you’re allowing your irises to drop the seed in the garden, the oddly-colored flowers may be a hybrid plant that has sprung up amidst the existing clump.

Pests and diseases on Iris can sometimes cause discoloration.

A mosaic virus is an incurable disease that can cause a permanent change in the blooms.

The most famous example of the mosaic virus is in the tulip, which led to a sudden boom in Holland’s flower market in 1636.

This event was exaggerated over the years.

Some accounts even claim people sold their homes for tulips that year.

But we now understand that the emergence of anhttps://plantcaretoday.com/iris-mosaic-virus.html iris mosaic virus caused the sudden swell in interest.

The diseased flowers had a marbled to a mosaic pattern that people treasured, yet the virus causes permanent damage to plants.

For example, after contracting a mosaic virus, an iris may suddenly show unusual patterns on the leaves and flowers.

Unfortunately, the disease is incurable, and it’s necessary to destroy the plant, its seed, and any soil it grew in to prevent further spread.

When you pick up a seed packet at the store, it usually has an expiration date on it.

These dates aren’t always accurate. Some seeds remain viable for several years, albeit to a lesser degree.

As a result, there are plenty of stories out there of growers who discarded what they thought to be failed seeds into compost, only to have an iris sprout as many as 5 years later.

If you’ve moved into a new home within the past few years, those unusual blooms may be seeds from the previous owner’s garden that have finally germinated.

It can be quite a pleasant surprise, although you must separate the two plants before they crowd each other out.

Overcrowding is another common reason your irises might seem to change colors.

When two iris plants begin to overlap, it’s not uncommon for one to completely overtake the other.

It can result in the illusion that the unlucky loser changes color when overtaken.

Growers are often surprised to discover that even tiny fragments of an iris bulb or rhizome can take root years after breaking off.

This can happen if you weren’t careful during transplanting and accidentally broke off portions of the rhizome or buds from the bulb.

These can lay dormant in the ground for several years, then suddenly pop up one spring without warning.

Finally, there’s the matter of sports, and we’re not talking baseball.

In botanical terms, a sport is an offset or seed of a parent plant (often a cultivar) that fails to carry over the parent’s genetic or physical traits.

Sports may have minor differences, such as:

The difference can be pretty drastic at other times because the blooms are a completely different tone.

The good news is that because sports are a mutation, they’ll often be able to pass their traits on to any offspring.

Two famous examples of sports are:

Sports are uncommon blessings when they happen, so be sure to propagate one if it springs up in your garden!