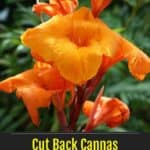 They might not be true lilies, but the genus Canna is nearly indistinguishable to the untrained eye. These beautiful plants are an excellent substitute for traditional lilies and are resilient, with ten species and numerous cultivars available.

However, as with many rhizomatous plants, canna lilies are perennials often grown as annuals in cooler zones. Because cannas die back when the weather gets chilly in some zones, you may be confused about when and how to cut back cannas for winter.

Fear not; we’ve compiled everything you need to know to prune your cannas to always be at their best.

How And When To Prune Or Cut Back Canna Lilies

Your Canna will tell you when it’s time to cut it back.

This happens in the fall, although there are times you may need to prune a sick canna plant earlier than this.

You’ll rarely need to prune your Canna during the growing season. However, it’s not unheard of for a leaf or two to die.

The dead leaves usually won’t cause any stress to your Canna, but they do pose an eyesore.

Remove any dead leaves when you spot them.

It’s much more likely that any pruning you’ll need to do during the growing season will result from disease or infestation.

Removing the diseased leaves can often stop any potential spreading unless your plant is suffering from something incurable, such as mosaic virus.

Removal of the damaged leaves can also help beautify your plant.

In the case of cannas, fungal infections and leaf rollers tend to do the most damage.

These conditions will require you to retreat the entire plant just to ensure the problem won’t return.

Using sharp, sterile shears, you can then prune away heavily damaged or infected leaves.

Remember that you should never prune away more than ¼ of any plant’s foliage, or it might not have enough left to photosynthesize.

Deadheading Cannas (the process of manually removing spend flowers) is a topic of much debate, as some growers swear by it and others swear against it.

This is because much of the evidence behind the benefits of deadheading is mainly circumstantial.

For example, deadheading a spent flower is known to help a plant redistribute its resources to other parts that are still growing.

However, supporters of deadheading claim this means the plant will produce more flowers with those resources.

Depending on the plant, this can be true, false, or somewhere in between.

Cannas are an in-between plant.

Canna lilies produce waves of blooms, so that deadheading may be beneficial.

As one flower dies, there’s another one getting ready to take its place.

To deadhead your Canna, grab some sharp, sterile shears and clip off the spent bloom just above the second flowering node (chances are, it will be starting to open already).

While deadheading seems to help encourage blooms on canna lilies, there’s another benefit for these plants.

With so many blooms trying to form on the stalk, the plant can become top-heavy and may start leaning to one side.

Deadheading alleviates some of this weight, allowing the Canna to continue standing tall and proud.

Cutting Back In Frost-Prone Zones

Now that the bloom period has ended, your cannas will spend a little while as lush greenery, but autumn signals the end of this latter growth stage.

It’s essential to avoid cutting back the plant until the first frost hits.

The frost will kill your Canna’s foliage, so wait another day or two for the leaves to dry out and start turning.

The plant has gathered all the resources it can for the winter, and it’s safe to cut it back.

Grabbing your shears and sterilizing them, cut off the stems and leaves around 4″ to 6″ inches above ground level (dwarf species may be cut shorter, usually around 2″ inches).

You will then want to dig up the canna rhizomes (often mistakenly referred to as bulbs), so they can be divided and stored indoors for the winter.

Suppose you’re growing the cannas in a movable container outside. In that case, you will still need to cut them back but will only need to dig up the rhizomes every 2 to 3 years for division.

Instead, you can store the entire container in a cool, dark place such as the garage or whatever room you are overwintering other outdoor plants.

Cutting Back In Frost-Free Zones

Cutting back your Canna in a frost-free zone is slightly different, but not by much.

As the temperature cools, the leaves will slowly yellow and fade, indicating that they’re nearing the end of their functionality.

You won’t get the exact sudden change as the one caused by frost, but the yellow and brown is still an easily-identified sign that it’s time to cut the plant back.

Using your shears, cut tall cannas back to 4” to 6″ inches above soil level and dwarf plants approximately 2″ inches.

Note that plants grown indoors year-round will still likely need to be cut back, although there may be some cultivars that remain nearly evergreen in the right conditions.

Once the plant has been cut back, you may wish to add a thick layer of mulch to cover the plant.

This is optional in the hottest zones but becomes necessary in zones 7 to 9 (depending on how cold-hardy your particular plant is).

Don’t forget to uproot and divide the rhizomes every 2 to 3 years to keep the plant happy and healthy.