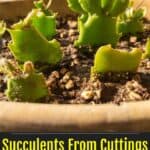 Succulents are among the most popular houseplants out there. These (usually) little guys are attractive and usually easy to care for and tend to be quite pleasing to the eye.

But succulents are like Pringles – once you have one, you need more. The good news is that most succulents can easily be propagated using cuttings.

Here’s everything you need to know to take one plant and end up with several.

How To Grow Succulents From Cuttings?

Cuttings are one of the best ways to propagate a succulent. Let’s look at why this is and go step-by-step through the process.

Most succulents won’t flower indoors, so it can be difficult to grow them from seeds.

In addition, it can become quite expensive to purchase new succulents whenever you want more. This is where cuttings come into play.

The vast majority of succulents can be propagated using either stem or leaf cuttings, making this a great default method.

In addition, it’s a fairly simple process once you get the hang of it, which means a much smaller chance of things going awry.

Finally, cuttings are often discarded when they could be used to make new plants, meaning this method reduces unnecessary waste.

Whether you use stem or leaf cuttings can depend mainly on the plant. For example, succulents that form a stemless rosette will usually have to be propagated through leaves.

Echeverias and similar plants have enough stems to propagate through either stem or leaf cuttings.

Meanwhile, aeoniums and similar plants must be propagated through stem cuttings because the leaves have a low or nonexistent success rate.

When in doubt, experiment a little to find out which method works best for your succulent.

There’s one thing we need to mention before you go diving into this (or any other) propagation method, however.

You should never use a sick plant to propagate from, as the chances of success are greatly reduced.

The exception to this rule is if the plant has become so sick from neglect or other issues that you won’t be able to salvage it otherwise.

In this case, as long s it doesn’t have an incurable disease (such as a viral infection), you may be able to salvage a few of the healthiest portions of the plant to try and start over.

Step-by-Step Guide For Both Stem And Leaf Cuttings

The process for both stem and leaf cuttings is very similar.

As a result, we’ll describe the process as a whole and specify any differences between the two.

The first thing we need to do is actually collect your cuttings.

Choose the healthiest portions of the plant for this step, giving you the best chance of success. This means gently taking hold of the leaf at its base and twisting it off for leaf cuttings.

You want the break to be as close to the stem as possible without harming it.

Likewise, you want to ensure you get as close to the base as possible, or the chances of the leaf surviving will be greatly reduced.

Stems are a little different.

Choose a spot on the stem just above a leaf and use some small, sharp (and sterile) shears or scissors to make a clean cut.

The clipping can be taken either from the plant’s top or an offshoot.

In both cases, the mother plant will be encouraged to grow where the cut was made.

Whether you took a leaf or stem cutting, the wound will need a chance to callus over. This is achieved by letting the cutting dry out in a sunny spot for 2 to 3 days.

This can often be the most confusing part for some people.

Once the callus has formed, a stem cutting should be placed directly into the soil, whereas leaf cuttings can either be stuck into the soul callus side down or laid onto the soil surface.

You can often place multiple cuttings in one container, transplanting the successful ones later on.

What makes this part frustrating is that the leaf cuttings have a higher success rate when laid on the surface than when stuck into the ground because it’s easy to overwater your cuttings.

When placed directly into the soil, a leaf cutting has a higher risk of developing rot, especially if the leaf is damaged during removal.

That said, the potting mix should be one appropriate for your succulent, with some added perlite or vermiculite to ensure it doesn’t retain too much water.

You will also need to water frequently, but be careful not to give the cuttings too much.

If the soil is dry to the touch, you’ll need to add some moisture.

Getting the leaves of your cuttings wet can cause them to rot, which is why people often have problems with this stage.

The bottom-up method is perhaps your safest choice here, as it won’t get the cuttings wet.

To use this method, find a shallow tray and sit the container of clippings in it.

Add some room-temperature distilled water or natural rainwater to the tray and allow it to soak for around 20 minutes or until the top of the soil feels slightly damp.

It will usually take around 2 to 3 weeks before you notice the new growth, either in the form of a baby rosette or little pink roots.

Don’t worry if you don’t see roots but do see a rosette, as this is just a sign that the succulent is focusing on the top before the bottom.

Once the roots are around 1 to 2″ inches long, it’s time to separate your new succulents into their own containers, being gentle, so you don’t damage the new roots.

But what happens if a few of the cuttings fail?

This is completely normal, and you shouldn’t worry as long as at least one successfully roots.

In nature, succulents can be damaged by strong winds or other disturbances, causing portions of the plant to break off.

These broken parts become new plants in the right conditions, just like when you propagate through cuttings.

However, even in nature, not every cutting will result in a new plant.

Your first attempt will likely have many failures, but the more cuttings you use and the more you use this method, the better your success rate will become