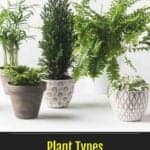 One of the most confusing parts of growing plants is the fact that we’re all taught as children to treat every plant the same, which can often lead to a sick or dead plant/

Because every plant is different, the real secret of a green thumb is knowing how to choose a plant that’s compatible with your home or garden and how to care for it once you have one.

The good news is that botanists have given us a cheat sheet in the form of broad categories that these plants can fit into.

For example, if you know your plant’s a succulent, you already have a good idea of the soil, water, light, and fertilizer needs for that plant.

Of course, every rule has an exception, so it’s important to do a little research about your plant before bringing it home to get the nuances down.

However, knowing the different types of plants and what they generally require can go a long way towards giving you that green thumb you‘ve always wanted.

Cacti are technically a subgroup of succulents, although a few species are considered cacti but not succulents.

What sets them apart from other succulents is that they only store water in their stems, often lack any leaves (which are often replaced by protective spines), and can thrive in desert conditions.

Cactus range in size from tiny globes to massive spires with little or no branching.

Homeowners are practically indistinguishable from other succulents in terms of care, except for preferring lower humidity levels.

Barrel cactus, old lady cactus, and prickly pear cactus are all popular houseplants in this category.

Epiphytes, like many orchids, are plants that use other plants for support.

When another plant is not available, it can sometimes resemble trailing plants and is often used in hanging baskets.

These plants aren’t usually parasitic and instead gain their nutrients and moisture from the air and environment around them.

As a result, these plants have very few soil needs but will need slightly different care methods than usual.

Their aerial roots mean you can use propagation methods that won’t work on most other plants.

Anthuriums, orchids, and holiday cacti are all examples of epiphytes.

This broad category includes plants that lack a woody stem above ground and which die after flowering (a condition known as monocarpic).

While many of these plants are perennial, almost all annuals and biennials are herbaceous plants.

They can vary in care needs but often require richer soils, with biennials requiring less fertilization than their kin due to their short lifespan.

Many garden herbs and vegetables, ferns and grasses, hostas, and peonies are all herbaceous plants.

Shrubs, or bushes, are medium-sized plants with multiple woody stems and generally only grow up to 33’ feet tall for the largest species.

The stems usually branch off below ground, but some species have a very short trunk that branches close to the ground.

Many generi containing shrubs also have tree species, such as plumerias, while miniature shrubs (known as subshrubs) can be as small as 6’ feet.

Care for shrubs is incredibly varied, with some being quite forgiving and others needing plenty of attention and exact conditions.

Aloe, bougainvillea, gardenia, hawthorn, holly, hydrangea, lavender, some maples and willows, most roses, vervain, and yucca are all types of shrubs.

Succulents are a broad group of plants that feature parts that have evolved to include thick, fleshy parts for storing water.

These parts store water, leading to the term “succulent” (“sucus” is Latin for sap or juice).

As a general rule, succulents tend to be drought-tolerant but aren’t well adapted for the harshest deserts and can be found on every continent except Antarctica.

Most succulents prefer dappled sunlight and hate standing water, with a preference for loose, well-draining soils.

A succulent may store its water in the leaves, stem, or even roots depending on the species.

A succulent can get water from almost anywhere, including the air itself, which is why many species are found in rainforests and tropical regions.

Some succulents are epiphytes, while others take on a shrub or tree form.

Generally, they are some of the least demanding plants for container growth but are more susceptible to sap-drinking pests (such as aphids and mealybugs) and highly susceptible to root rot.

Some popular succulents are agave, aloes, and plumeria.

A trailing plant is easily identified by its long stems, which tend to spread in various directions.

Although they’re often aggressive growers, they make an excellent ground cover and can become invasive.

Vines are a genus of trailing plants better known for being climbers.

As juveniles, they can become a dense groundcover until they find something to climb, at which point they change in appearance and latch onto the discovered support structure.

Because these plants tend to snake out or create offshoots, they are often grown in hanging baskets, where the stems hang down.

Care for these plants is generally easy but can vary a lot from one species to another, so be sure to do a little homework to get the humidity, water, and soil needs right.

The precise definition of a tree can vary, but these are generally considered plants with a long stem and usually supporting branches that may include leaves.

Unlike cacti, they are not generally succulents and are often distinguished from shrubs solely in terms of height.

Many dwarf trees also exist, which grow around the height of shrubs or even smaller, and some trees have a short height but spread out horizontally over a much wider radius.

Citrus trees, some maple and willows, and many plumeria species are classified as trees.

The examples given above are some of the most common plant types, but there are many more, with plants usually fitting into more than one category.

For an even better idea of what your current or future plants might need or have to offer, be sure to also check out our list of common plant terms.