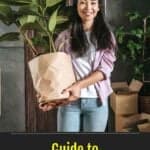 Plants aren’t just something to eat or look at. Many help clean toxins from household air, and some even soak up radiation.

Even more important is that ongoing research correlates improved mental and physical health with exposure to plant life.

But this isn’t to say owning a plant can’t be stressful, especially if you get one that doesn’t provide the qualities you were hoping for.

This latter problem can be greatly reduced by understanding common botanical terms.

But once you have an idea of the difference between a spadix and a caudex, you’ll find shopping and caring for your plants can be a lot more enjoyable.

The following quick reference guide doesn’t include the most basic terms, such as petal or stamen, but it will include many other botanical terms that can be important to know.

This is not an exhaustive list, and having an idea of the different plant types can also help choose the right plants.

Just as the name implies, this is a plant that must be replanted every year, either due to a shorter lifespan or inadequate cold tolerance for your region.

Midway between an annual and perennial, a biennial has a two-year lifespan.

Bracts are modified leaves that look different from normal leaves and serve a different function.

Some, such as spathes, attract pollinators and can be found on bougainvilleas and poinsettias.

Others form a protective shell around seeds on grasses and are commonly referred to as the chaff.

A bulb is a short, vertical stem that stores food underground while the plant is dormant.

Meanwhile, corms are modified stems with a coating of dry, scale-like leaves known as a tunic and several nodes lacking in a true bulb.

You will usually find a caudex on succulents, often beginning above ground as a swelling in the stem or trunk and slowly sinking as the plant ages.

A tuber is a swollen root, rhizome, or stolon that performs the same task and usually grows laterally.

Cycads, ferns, and palms are all plants with a caudex, while potatoes and many daylilies are tubers.

Deciduous plants are defined by losing their leaves when they enter a dormant phase, usually in winter.

In many cases, especially trees and shrubs, the plant will withdraw nutrients from its foliage, exposing its natural coloring as the leaves die and drop off.

Some deciduous plants may be grown as evergreen or nearly evergreen under the right conditions.

While the term evergreen may suggest the plant is always green, it refers to any plant that doesn’t lose its foliage when it goes dormant.

Some evergreens may change colors or lack a dormant phase.

Plants used for culinary seasoning or medicinal use may be referred to as either an herb or spice, depending upon the part of the plant used.

Herbs are considered the foliage or flowers of the plant, while spices are defined as any other part of the plant being used.

Note that all parts of the plant used for spiritual purposes are considered herbs in religious terminology.

The term herbaceous may be confusing because it sounds so similar to the word herb.

However, herbaceous plants are defined by the lack of a woody stem above ground and, while they include herbs, also encompass many other types of plants that can rival shrubs or trees in size and may not be edible.

Many common plants, such as hostas, peonies, and ferns, are herbaceous.

An inflorescence is simply a grouping of flowers, usually on a spadix or otherwise clustered together on a single source.

Monocarpic plants die after flowering once and producing seeds.

Most annuals and biennials are monocarpic, but so are many perennials such as aeoniums.

Thankfully, even perennials can be salvaged through propagation methods, with only the mother plant dying.

This is the stalk that supports either a single flower or an inflorescence.

Perennials are plants that live for more than years.

The term is sometimes misleading, as many perennial plants can be grown as annuals in regions where it’s too cold for the plant to overwinter.

The antithesis of monocarpic, a polycarpic plant, can bloom many times during its lifespan.

Some common examples include gardenias, plumerias, and roses.

These are two types of modified root systems, both of which stretch out horizontally.

A rhizome contains several nodes, all of which can sprout new plantlets above ground and roots below ground.

Stolons are the above-ground equivalent of a rhizome and are sometimes called creepers.

The spadix is a type of inflorescence that is quite common on aroids (i.e., members of the family) and has a conical or cylindrical appearance.

Tiny flowers, which are often unimpressive, bloom along the spadix length.

In some cases, the plant’s spathe obscures the spadix and its blooms.

Meanwhile, spathes are often mistaken for flowers, but they’re bracts surrounding the spadix.

Anthuriums are perhaps the most notorious example of a plant’s spathe being mistaken for a flower while the actual flowers go unnoticed.

Other popular plants with a spathe and spadix include American taro, jack in the pulpit, and lilies.

This is a long, thick central root structure generally conical in shape and has smaller branching roots.

Carrots and many other vegetables are the taproots of plants, while burdock, dandelion, sagebrush, and even oak trees are also examples of plants with taproots.

A “dirt” glossary! Well, sort of. A glossary of terms for garden soils to help you while reading through some of the articles at Plant Care Today. Some terms are older and seldom used, and others are used in our everyday “plant” vocabulary.

A complete fertilizer contains all the major elements—nitrogen, phosphorus, and potassium, and in some cases, many of the trace elements. Three-figure symbols – such as 5-10-5, 4-8-4, and 2-5-7 are in general use to indicate the proportions of these constituents in a given fertilizer.

Compost is a kind of manure made up of various fermented or decomposed materials adaptable to use as a fertilizer.

Compost results from making a compost pile, which is generally composed of alternate layers of manure and absorbent vegetable refuse such as garbage, lawn clippings, leaves, sod, rubbish, etc.

An excellent source of humus, it is the best “filler” or base to use in the distribution of commercial fertilizers, itself being both an invaluable fertilizer and soil conditioner safe for all garden plants.

A soil conditioner is the same as an amendment. Soil conditioners improve the texture of clay or sandy soils (which are deficient in natural chemicals) by linking together the exceedingly tiny soil particles into aggregates. They have no food value.

A cover crop is a temporary crop sown at the close of the growing season simply to cover the ground until early spring.

A cover crop prevents erosion and leaching away of plant nutrients, checks the growth of perennials, and helps to harden or ripen them by using up some of the soil food. When turned over in spring, a cover crop also adds valuable organic material to the soil.

A soil crust is a surface layer of brittle, hardened soil that forms on many soils as they dry out, particularly after thorough wettings.

In the soil sense, the term cultivation includes all tillage operations from the pre-planting soil preparation by digging or plowing through all the many after-planting stirrings of surface soil until crop harvest.

Most gardeners, however, use the term to refer only to the after-planting tillage of surface soil, which serves to kill weeds, break up a hard crust, aerate the ground and establish a dust mulch.

Damping-off is a condition, not a disease of seedlings that produces wilting and death. It occurs just before or after the seedlings emerge from the soil and is caused by many fungous parasites.

Once a seedling is affected, there’s no cure. However, damping-off can be prevented by ventilating and drying the seedbed and by pre-planting treatment of seeds or soil with heat or chemicals.

Drainage is the natural or artificial filtering or channeling off of excess water using ground slope and open ditches, and in the case of subsurface drainage by use of special porous tiles.

Drainage of small, waterlogged plots can often be improved by adding coal cinders, sand, or organic matter. Drainage requirements for potted subjects always include a hole in the pot bottom.

Erosion is the wearing away of land by the action of water, wind, or other force.

Fallowing is the soil-management practice of allowing land to rest, without any crop on it, for one or more seasons.

The only cultivation during this period is surface tillage to discourage weeds. The purpose of fallowing is to afford soil the benefits of the uninterrupted play of sun, wind, rain, and frost on it, which action serves to build up soil’s productive capacity and water-storing ability and also serves to starve out any existing soil pests, diseases, and weeds.

Fertile soil has a good physical structure and the nutrient elements essential to plant growth – but no toxic or harmful elements.

It must have the ability to retain sufficient water to support plants yet not hold an excessive amount. It must also be well aerated.

A fertilizer is any material—organic or inorganic—which, when added to the soil, hastens plants’ growth, improves their quality, increases their size or yield, and/or improves the soil.

A friable soil can be easily cultivated or dug. It crumbles readily in the fingers.

The term green manure applies to any crop grown for the sole purpose of being plowed under and thereby improving the soil by adding organic matter.

Hardpan is any hardened or cemented layer of soil that prohibits the penetration of plant roots and water filtration.

Heaving is the alternate rising and falling of plants in the ground caused by successive freezings and thawings. A light, well-drained sandy soil heaves only slightly. However, heavy clay or silt soil may heave sufficiently to lift some plants completely out of the ground or tear the crowns of others away from their roots.

Heavy soil is predominantly clay or silt. Its soil particles are so fine they prevent the easy flow of water and therefore retain an excess, becoming muddy in wet weather.

Soil horizons are the several distinct soil layers lying approximately parallel to the land surface and produced through the soil-building processes.

Each horizon has more or less well-defined characteristics and colors.

The upper or A Horizon is usually dark and contains leaves, decomposed roots, and dead and decaying matter of all kinds. This surface soil with its organic residues is usually the most fertile layer.

The B Horizon, lighter in color, comprises finely ground rock particles and contains some plant roots. The third or C Horizon is composed of original rock.