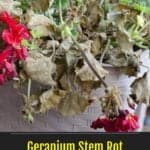 The topic of geraniums can be a confusing one for many people.

Many of the plants you think of as geraniums aren’t geraniums at all but plants that were formerly a namesake genus.

In the case of geraniums, true geraniums are often called “hardy geraniums” due to their higher resilience.

All other geraniums are Pelargonium (pe-lar-GO-nee-um), roughly half the size of the Geranium (jer-AY-nee-um) genus. They make up the vast majority of geraniums grown and sold.

All geraniums are susceptible to rot.

Pretty much every gardener knows about root rot, but did you know that stem rot is also a significant risk often caused by the same fungi?

Here’s everything you need to know to combat stem rot in both geraniums and pelargoniums.

What Is Stem Rot?

Stem rot is a condition that many fungal infections may cause.

Some, such as Pythium spp. It may cause both leads to root rot and stem rot. In the case of pythium, the stem rot is called blackleg.

Stem rot is usually caused by overwatering. But it could also be due to cross-contamination or infected soil.

While the symptoms are a bit different from root rot, it’s every bit as deadly and often more brutal to treat once the infection sets in.

What Damage Does Stem Rot Cause?

Many of the symptoms of stem rot may come from other conditions.

The leaves will often turn yellow or brown and will begin to wilt.

Meanwhile, the stems will brown then blacken as the infection spreads.

For the most part, there’s no cure for stem rot. But plants can often still be salvaged if the decay is caught in time.

Because the fungi that cause stem rot – often referred to as water molds – can survive for long periods in the soil, cross-contamination can be a risk.

Since these fungi attack most plants, the risk of stem rot spreading to nearby plants is also high.

How To Control Stem Rot?

As mentioned, there’s no actual cure for stem rot once it sets in, but you can control it if caught early on.

Examine the stems of the infected plant.

Stems that are still primarily green may often be pruned down or treated. But severely blackened limbs must be destroyed.

For chemical fungicides, choose a product marked for stem rot and apply as directed.

Allow the soil to dry out, or the rot will return.

It’s best to temporarily uproot the plant, treat it, and sterilize the soil before replanting.

Note that fungicides will not be able to restore severely damaged stems.

Perhaps the gardener’s best friend, raw neem oil in the form of a soil soak, can help fight off root rot and stem rot. But it won’t restore severely damaged stems.

The soil soaks work by being absorbed into the roots. Neem’s principal active ingredient, Azadirachtin, becomes a systemic pesticide that helps protect the plant for up to 22 days.

While not strictly a fungicide, neem oil can help combat many fungi and bacteria.

Once again, you will need to let the soil dry out for any treatments to be effective.

The neem oil will help kill off some bacteria, and careful pruning of infected areas will often be enough to save the plant.

Neem soil may be safely used every 2 to 3 weeks and work as a preventative measure. This is an excellent natural option for use in conjunction with fungicides.

It’s essential to let the soil dry out, but you may wish to temporarily pot your geranium or move it to a fresh pot while it recovers.

Carefully uproot the plant and remove any remaining soil from the roots.

Check for signs of root rot and cut away infected roots.

Dust the roots with a fungicidal powder and plant in fresh, uncontaminated soil.

You will also need to prune away severely infected stems.

Reintroduce garden specimens to the garden after recovery.

Stem rot is a severe and highly contagious disease.

When pruning, always sterilize your equipment before work and after every cut.

Wash your hands before moving on to the next plant.

Securely dispose of the debris to ensure any unnoticed pest or disease issues don’t spread.

Water your geraniums using the soak and dry method, and avoid using a hose or sprayer when possible.

Instead, water the ground directly to avoid getting the stems or leaves wet.

Stick your finger in the soil to determine if it’s time to water instead of relying on a calendar.

Neem soil soaks in regular watering can help boost the plant’s defenses against internal infections such as stem rot.

Never reuse the soil of an infected plant unless it’s been adequately sterilized.

In some cases, sterilization may be a simple matter of drying the soil out entirely and heat-treating it to kill off any diseases. Then amend the soil to replace any lost nutrients and destroyed organic components.

But, most sterilization treatments are expensive and may need to be done professionally.

For potting soils, discard the infected soil and treat the pot with bleach and hot water or soak in rubbing alcohol to kill before reusing.