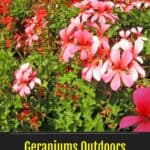 It’s easy to get confused when it comes to geraniums.

After all, there are over 420+ species of the actual Geranium (jer-AY-nee-um) genus, but they’re not nearly as common as the 280 species of Pelargonium (pe-lar-GO-nee-um) which still bear the moniker of geranium despite being split off way back in 1789.

Those of the actual genus are commonly referred to as true geraniums or hardy geraniums and tend to be perennials with a much higher cold tolerance.

They come from mountainous areas all over the world with most hailing from the mountain ranges in the Eastern Mediterranean area.

Meanwhile, most pelargoniums are from South Africa and Australia, with only 30 species found elsewhere, and tend to be annuals with a low tolerance for cold.

The seemingly backwards temperature preferences aren’t the only difference between these two genera of geranium, as they are also distinguished by their flower shapes and number of anthers (or stamens).

However, they have a lot more in common than they do differences.

Both are still part of the Geraniaceae family, as are a few geranium plants now belonging to the Erodium genus. And their care is almost identical.

This latter genus only has around 119 species and is more commonly known as storksbills or heron’s bills while true geraniums are sometimes called cranesbills.

Erodiums are found in North Africa, across southern Asia, and into Australia but are far less common in gardens and rarely referred to as geraniums these days, but it’s still important to note their existence in case you purchase one marked as a geranium.

More on the Types and Varieties of Geranium Plants

Geraniums can vary greatly by shape and size, with hardy geraniums ranging from a tiny 4” inches tall to 3’ feet and having either a mounding or spreading habit, making them great for outdoor containers and pots or as groundcover depending on the species.

Pelargoniums can have far more variation, with most being grown as annuals (although they can survive as perennials in warm enough climates).

Zonal geraniums (Pelargonium x hybridum) are types of geraniums and are so popular that they’ve earned the nickname “common garden geranium” and come in regular sizes of 24” inches or less and dwarf versions of only 5″ to 6” inches.

Regal geraniums (Pelargonium × domesticum) are poorly suited for garden life and are grown almost exclusively as container plants, so plan ahead if you wish to have these 12″ to 24” inch hybrids outdoors.

Finally, ivy geraniums (Pelargonium peltatum) are trailing plants that can reach up to 48” inches long and have heart-shaped leaves.

This group actually overlaps the other groups, so your zonal geranium may also be considered a scented leaf.

Bloom times can vary greatly between different species and cultivars, and the shapes of the flowers and stamens/anthers actually help identify which genus you have.

Erodiums have a disk with five roughly equal-sized ray petals and five stamens, while true geraniums have 10 stamens and similar flowers.

Pelargoniums, meanwhile, have 7 stamens and the flowers usually bear two smaller ray petals at the top and three larger at the bottom.

Depending on the species or cultivar, the anthers may have a shape similar to the bills of certain birds, leading to some of their common names.

These plants all love a bit of sun, but pelargoniums have a higher tolerance for full sun than hardy geraniums.

As a general rule, morning sun or evening exposure is best for both, with a bit of partial shade or dappled sunlight in the afternoon.

Temperature is actually where these plants tend to differ most, and while you can plant hardy geraniums in a range as large as USDA hardiness zones 3 to 9 (depending on the species or cultivar), pelargoniums are grown mainly in zones 9 to 12 with some cultivars being able to overwinter indoors as perennials as cool as zone 7.

Most growers above zone 9 tend to grow pelargoniums as annuals, however, allowing them to die off in winter and planting seeds or cuttings the following spring.

In both cases, be wary of sudden drops in temperature, as this can cause geraniums to start dropping leaves for dormancy.

All geraniums are drought-hardy to some degree once established, with the hardy geranium being more tolerant.

However, they all need approximately 1” inch of rainfall per week during the growing season to thrive.

You can use the soak and dry method here, just like you would a potted plant.

If the soil is dry to the touch 1” inch down, your geranium needs water.

Pour slowly and evenly around the base of the plant, being careful not to wet the leaves, until the soil starts taking longer to absorb the water.

Pelargoniums can be bigger eaters than true geraniums, but you can still use similar care.

Your true geranium may be able to get by all year with one good application of compost in the spring.

Pelargoniums can skip their first feeding if planted in similarly fresh-composted soil but will benefit best from a monthly balanced half-strength liquid water-soluble fertilizer.

This can be another sticking point if you don’t know your true geranium from your pelargonium.

True geraniums can handle almost any type of soil but prefer one that’s loamy and slightly sandy with a pH of 5.8 to 6.3

Meanwhile, pelargoniums don’t like clay soils and require a pH of at least 6.0, with many preferring 6.3 to 7.0, depending on the species or cultivar.

All geraniums need the soil to be well-drained, however.

While perennials can be left alone if grown as annuals, you may need to dig up the tubers of both genera to overwinter indoors.

This is usually preceded by cutting back to the basal growth and the plants are often divided prior to replanting in the spring.

Geraniums don’t require much pruning, although pinching the tips in spring and early summer will encourage fuller growth.

Trim away dead or dying leaves to maintain plant health.

Some growers also like to deadhead, especially zonal geraniums, but this isn’t a strict requirement.

How To Propagate Geranium?

All geraniums can be propagated through division, cuttings, or seeds – although the latter is unpredictable in cultivars.

Hardy geraniums have a higher cold tolerance than pelargoniums and both have some degree of drought tolerance.

These plants can be affected by the most common pests, aphids, whiteflies, caterpillars, and mealybugs although the damage is usually less severe than on other plants.

Be especially on the lookout for fungus gnats, which can reveal a fungal infection, and thrips, which can be vectors for the mosaic virus.

Note that some pests and diseases only affect specific species and their cultivars.

Pelargoniums are toxic to both humans and pets, but true geraniums are safe and actually edible for humans.

The uses for these plants are nearly limitless due to their wide range of shapes, sizes, and growth habits.