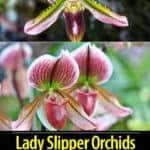 The phalaenopsis orchid is very popular for its colorful blooms and uniquely-shaped petals.

But the Lady Slipper Orchid is another species from the orchid family that turn heads just as phalenopsis blooms do.

Thousands of indoor plant lovers have an African violet growing and blooming in their window sill garden.

If you do, you can and should grow a lady slipper orchid. They’re just as easy as African violets!

Paphiopedilum [paffy-oh-PEED-i-lum] aka Lady’s Slipper, Lady’s-slipper, Ladyslipper is a fan-shaped plant with flowers having a part in prominent slipper-shaped pouch form and two sepals that are either droopy or held horizontally.

How Many Paphiopedilum Species?

There are approximately 60 Paphiopedilum orchid species native to North America and Europe. This particular Paphiopedilum variety is a one-flowered plant with dark spots on the dorsal sepal and red hairs at the bases of the petals and sepals.

The petals usually come in dark reddish brown color with a touch of orange.  In addition to the beautiful flower of this plant, it is also loved by many orchid enthusiasts for its handsome and compact foliage.

At first look, each leaf has an upper green portion, but a closer look will show its base has purple spots.

Paphiopedilum insigne flowers are long lasting (up to 2 months), an unusual characteristic for an orchid.  It is one of the few orchids that can adapt to typical home conditions.

Although this plant is slow to grow flower, it is revered by many orchid lovers around the world.

The Lady’s Slipper is the official provincial flower of Prince Edward Island, a province of Canada.

The lady’s slipper is also known in the United States of America as the moccasin flower because of its resemblance to a shoe or moccasin.

You may know this orchid by another name. Paphiopedilums are commonly referred to as cypripedium. This term is sometimes shortened to “cyp.”

Correctly, cypripedium is the botanical name given our wild lady slippers.

Cultivated orchids with the slipper lip should be known as paphiopedilums. They are available online from many orchid specialists.

There are several good reasons for choosing a paphiopedilum over other orchid genera.

For one thing, their culture is the simplest. Although Phalaenopsis (moth orchids) are simple.

For another, the flowers last from one to three months, and the plant is attractive when not in bloom. The plant is small-growing.

Paphiopedilums have a varied flowering season. Thus, a carefully chosen collection of as few as six plants could result in a year-round succession of bloom.

What’s more, the range of colors and combinations is exceedingly broad.

Six hours or more of daylight is obtainable usually from south or west windows. When house-grown, paphiopedilums need optimum light, but it must be indirect.

Shading will be required during any time of day that the plant would be in direct sun.

Watch the color of the foliage; an intense, deep green may indicate insufficient light; yellow-green warns of overexposure.

Since paphiopedilums are terrestrial orchids, they have no means of storing water. This makes them similar to common house plants in that their water intake is through their roots.

Do not allow the plant to sit in water nor dry out. Unfortunately, no rule can be made as to the frequency of watering.

It might be daily; perhaps two or three times weekly. The important thing is to avoid extremes of wetness and dryness; use good judgment!

Assuming your paphiopedilum is growing in fir bark, the planting medium used by many growers, every other watering should be supplemented with fertilizer.

Organic gardeners use fish emulsion plant food at the rate of one teaspoon to a gallon of water.

(Others prefer a 30-10-10 chemical fertilizer applied according to manufacturer’s directions.) On alternate fertilizing days, also add more nitrogen by using ammonium nitrate at the rate of one-half teaspoon to each gallon of water and fish emulsion.

Paphiopedilums are less fussy than other orchids about humidity.

On sunny days when the humidity is low, foliar spraying is advisable. In this type weather the leaves will dry quickly, eliminating the hazard of water remaining in the leaf axils.

A plastic bag placed over buds and flowers during spraying will keep them dry. Wet buds will blast!

Plants syringed daily will also be dust-free and less subject to invasion by insects.

Should your house be extremely warm and dry, add a humidifier to the room, and mist the foliage as often as convenient.

Every other year, after flowering, repot paphiopedilums growing in fir bark, which, by the way, is the easiest and cleanest medium for growing them.

Unless more plants are desired, transfer the entire plant to a larger pot rather than separate the divisions. More blossoms per container will result.

There are six steps in repotting: