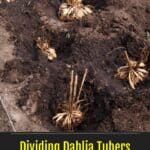 One of those shocking truths of gardening is the fact that roses are overrated.

In fact, quite a few gardens won’t have a single rose in them but will be filled with other flowering plants that outperform roses with far less need for attention.

The dahlia (DAL-ee-a) is one such plant.

With 42 species and over 57,000 types of registered Dahlia cultivars (with around 100 new ones each year), the dahlia is a heavy bloomer with blooms that range from tiny balls to massive flowerheads that give sunflowers a run for their money.

Of course, there’s a downside to this much variation, and that manifests itself when the time comes to propagate.

Since growing a cultivar from seed can result in just about anything (except the plant you wanted, usually), division is the primary method of getting more.

And since these plants are often overwintered indoors, division can often become just another part of basic dahlia plant care.

Related: Learn More About How To Deadhead Dahlias For More Flowers

How Do You Divide Dahlia Tubers?

There’s a bit of a process involved in dividing dahlias that might seem a little complicated at first, but is easy to master.

The complexity merely lies in the fact that division is part of a larger care phase.

At the end of summer, especially in USDA hardiness zones 7 and 8, you will likely begin the process of digging up your dahlias to overwinter them indoors, since this isn’t a frost hardy genus.

While some growers will uproot their dahlias prior to the first frost, it’s usually best to allow the plant to endure an early light frost and uproot before the first heavy frost comes.

Some growers will divide soon after uprooting, but tubers won’t always remain viable until spring, so most growers will instead divide prior to planting.

In the event you have a cultivar that’s known for sparse tubers or short shelf life, you may also choose to pot the divided tubers so they can overwinter more safely.

However, most well-established plants will be able to overwinter after division with only a small risk of viability loss.

Begin by carefully digging up your dahlia after cutting it back to the basal growth.

Some prefer to use a shovel while others prefer a pitchfork for this task, but in both cases, be gentle as the roots can be quite fragile.

Once excavated, wash the dirt off the roots of the bulb or tuber clump using a low-pressure sprayer.

This not only makes overwintering the plants easier, but it can also help you spot any signs of disease.

An important step that’s often overlooked during uprooting is that water can get into the stems and ruin the plant if you cut a few days early and don’t protect the plant.

So when pruning back the stems a day or two early, be sure to cover the tops of the stems with foil or some similar waterproof barrier.

According to the American Dahlia Society, it’s best to dip your shears in a mix of 1 part bleach to 10 parts water between plants to avoid the spread of disease.

They also recommend removing the rest of the stem when dividing.

NOTE: If working with more than one cultivar or species, it’s important to keep your tubers labeled at all times so you don’t get them mixed up.

Whether working in the fall or spring, the process of dividing is the same.

Look over the clumps and decide how many divisions you wish to make.

Each resulting tuber should have at least one piece of the crown with an eye.

Discard the mother tuber cluster, as well as any damaged, or rotten tubers, diseased, or have skinny necks.

Use a sharp, sterile knife or shears and sterilize between each cut.

Some growers prefer smaller roots to larger ones when overwintering, but your own mileage may vary.

Remove all feeder roots and stalks, and check for discoloration on the inside of the crown, which may be a sign of rot.

Cut away those discolored areas or discard that clump.

Give the tubers another wash and cut off a portion at the opposite end of the eye to check for discoloration.

Sometimes you can remove sections, moving closer to the crown, and locate a healthy spot, at which point the tuber should be viable.

However, if the discoloration continues, the tuber may need to be discarded.

Another often overlooked step is to treat the cut ends of the tuber. Do this by dipping the cut in sulfur, Captan, or a fungicide.

Dipping in a liquid fungicide should take 15 minutes, at which point you can remove the tuber and place it in an open shoebox, cardboard box, or other spot to dry.

Only use one tuber per container while drying, which can take 24 to 36 hours, depending on the size of the tuber.

At this point, you can overwinter the tubers or (if dividing in spring) plant them.

Related: More on How To Dig, Divide, and Store Dahlia Tubers

Most cultivars can store safely throughout the winter if they were planted for at least 120 days or exposed to a mild frost prior to uprooting.

There are many different methods, but there are two mediums that seem to work particularly well and help prevent the tuber from sprouting too early.

Avoid using peat moss, perlite, coarse sand, or other mediums that may expose the tuber to water or excess moisture and cause it to sprout early.

The other method is more time-consuming but works best for tubers that tend to sprout quickly.

Simply dip your tuber in paraffin wax, and it will protect the tuber from infections or rot while also keeping it from getting too moist (which will cause it to sprout early).

Store the bagged tubers at a consistent 40° to 45° degrees Fahrenheit and check monthly to ensure there’s no sign of disease.

In early spring, move your bags to a warmer spot to encourage sprouts.

Approximately 10 days before planting, give them 1 teaspoon of water per quart of bag volume and retie the bag.