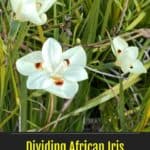 Irises are fascinating plants and not just because of their looks. The genus is divided into six subgenres between 260 and 300 species (depending on whom you talk to).

Two are rhizomatous, while the other four are bulbous and were considered separate species.

But even more interesting are the irises that aren’t irises, such as Dietes iridioides (dy-AY-teez ir-id-ee-OY-deez), the African Iris.

This plant (whose name means iris-like) graces many gardens right alongside true irises. This incorrectly leads some to believe they share the same care requirements.

There are a few differences in this rhizomatous plant, such as when it’s best to divide them.

When Is the Best Time To Divide African Iris?

While one can divide African irises at any time, late summer is generally best.

This timing gives the freshly divided plants a boost for the following year.

Just like rhizomatous irises, your African iris will need division every 3 to 5 years.

This time is the point when the clumps begin to overcrowd themselves. Also, the older central rhizome is likely no longer able to bloom.

Many growers choose to divide in late winter, claiming it gives the plants more time to grow new foliage.

But, this late timing may prevent blooms for that year, so most experts agree that late summer to early fall is the best time.

As African irises love warmth, this gives them enough time to reestablish before frost sets in.

They spend this time storing up vital nutrients giving the plant a stronger start in the spring.

Should You Cut Back First?

After being cut back, African irises need up to 6 months to regrow their foliage.

It can leave the plants looking rather scruffy for some time.

Cutting back will reduce the plant’s ability to photosynthesize and store up energy for the winter.

Sometimes, cutting back is unavoidable (such as when dealing with pests or disease problems). But it’s best to leave the foliage intact when possible.

Another reason to avoid cutting back is that African irises will only bloom from an established stalk.

By cutting back, you may be removing this stalk, which will make proper division of the plant much harder.

Carefully dig around the clump, allowing a few inches of space to reduce the risk of damaging the rhizomes.

A spade or garden fork will work best, allowing you to get under the plant and gently pry it from the ground.

Don’t worry if you cut some of the trailing roots during excavation, as this plant is more forgiving than most rhizomatous irises.

Once you’ve pried the plant free, knock away any excess dirt.

Unlike some true irises, it’s often easier to divide an African iris before checking for damage.

Divide by hand or by using a sharp, sterile knife.

Pro Tip: Before dividing, take some twine and tie each flower stalk with its nearby foliage to get a clearer idea of where to divide.

Remember that each division must have a stalk and a few leaves to survive.

Cut away and discard the central rhizome as it’s nearing the end of its lifespan.

Perhaps the most critical step is to scrutinize each rhizome piece for any signs of disease or damage.

Mushiness, a foul smell, or brown to black flesh are signs of rot or fungal disease.

It’s often possible to cut away the diseased sections until only healthy white tissue remains. But discarding these rhizomes is better.

Tiny holes in the rhizome are signs of iris borers or similar pests and signal it is time to dispose of the rhizome.

Once you’ve selected the healthy rhizomes, it’s an optional choice to give them a treatment to help prevent infection.

A dusting of fungicidal powder is the faster choice. Or you may do a 30-minute soak in a 10% percent bleach solution.

Allow the rhizomes a day or two to dry afterward.

Prepare your soil or potting mix before planting, and make sure the new spot will get at least 6 to 8 hours of sunlight per day.

You’ll want to plant the rhizomes in groups of three, with each member of the group 2’ feet away from the others.

This spacing allows the plants plenty of room to grow before becoming overcrowded.

Dig a small hole a little larger than the rhizome and lay it in the middle.

Next, slowly backfill, spreading any roots out as you go.

Bury the rhizome to approximately the same depth as when you uprooted the mother plant.

Give the plants some water to help them settle into their new homes.

Finally, if you bound the leaves, you can tie them to a bamboo stake to help support the plant until established.