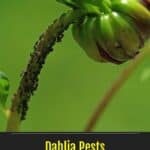 Anyone who is familiar with the Silent Hill franchise will remember Dahlia, the woman who attempted to sacrifice her own daughter and who could be blamed for the events of the entire franchise.

While the Dahlia (DAL-ee-a) genus isn’t as evil as the video game antagonist, they do share a certain charisma that has led the 42 species to be expanded into more than 57,000 cultivars and counting.

But as diverse and wonderful as these plants are, with flowers of all shapes and sizes, they do share one thing in common with Dahlia Gillespie: their plans to create life are often thwarted by pests.

While none of these pests will kill your precious dahlia plants, they can disfigure them and drastically reduce the number of blooms.

On top of that, they can herald in an array of Dahlia diseases, either through honeydew, damage, or as direct vectors.

A number of pests can affect dahlia plants, many of which you’re likely familiar with.

Here are the prime suspects:

What Damage Does Dahlia Pests Cause?

While there are a lot of different pests that affect dahlias, they can generally be grouped into three types of damage: defoliation, discoloration, disease vectors.

Here is what to expect and which pests are responsible.

Caterpillars, grasshoppers, slugs, TPB, and snails all love to munch on leaves.

This may result in holes, scalloping, or the complete destruction of leaves and sometimes stems.

In a few cases, these pests (especially some caterpillar species) will also attack buds and flowers.

Earwigs will attack almost any part of a dahlia plant that’s young and tender, from the stems to the petals.

Sap drinkers, such as aphids, spider mites, and thrips, can weaken a plant, leaving it open for disease.

The process of extracting sap is most often notable for causing discolored spots on the leaves where the plant has lost chlorophyll.

Leafhoppers and thrips are vectors of major dahlia diseases, some of which are incurable.

Additionally, piercing bugs leave behind a sap-laden frass called honeydew which can attract powdery mildew to Dahlias and other fungal infections.

How To Control Dahlia Pests?

Chemical insecticides are a viable option for all of these pests, although there’s a risk of creating superbugs or harming beneficial insects when using them.

Be sure to check the label of an insecticide before buying to ensure it will affect the particular pest you’re dealing with.

Neem oil is perhaps the best method for all of these pests, but it will take longer for the effects to show.

This is because neem oil will either suffocate on contact (as a foliar spray) or cause infertility (when used as a soil soak), so multiple applications are needed to catch bugs as they hatch.

Also, it may take a while for adults to die when poisoned by neem, although they will be unable to reproduce.

In the case of larger pests, such as grasshoppers, slugs, snails, TPB, or caterpillars, you can often simply pluck them off the plant and toss them into a bucket of soapy water.

Beneficial insects will also help combat many of these pests.

Ladybugs and parasitic wasps are two of the most popular and may be ordered online.

Just be sure to add plants that attract these bugs to your garden or they’ll decide to move on the moment food becomes scarce.