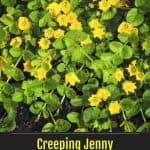 Lysimachia nummularia (ly-si-MAK-ee-uh num-ew-LAH-ree-uh) is a low growing, herbaceous perennial member of the Primrose (Primulaceae) family which hails from the temperate areas of Asia and Europe. The plant has become naturalized in many of the eastern parts of North America.

The plants’ genus name, Lysimachia, honors the Macedonian king of Thrace, King Lysimachus who lived from 661-281 B.C. and is said to have used the herb as a calming additive to his oxen’s feed.

It is also derived from the ancient Greek, lysimacheios, which is the name of another plant within this grouping.

The specific epithet, nummularia, means coin and is a reference to the shape of the plants’ leaves.

This short, creeping ground cover forms a leafy mat which is only about 2″ or 3″ inches high. Individual plants spread about 1-1/2′ feet.

Moneywort’s leaves are coin shaped and slightly ruffled. They are about three quarters of an inch in diameter. They may be bright green, or in Creeping Yellow Loosestrife, they are yellow.

When Does Creeping Jenny Flower

Blossoms transition into fruit capsules, each containing between one and five small seeds

The pretty, hardy creeping jenny plant can do well in partial shade to full sun. The golden yellow flowers are most abundant in full sunlight. Foliage coloring also varies depending upon sun exposure. In shade, the foliage is pale green. In sun, it is deep green.

Can Golden Creeping Jenny Tolerate Lysimachia Full Sun? Although this plant can do well in full sunlight, if you live in an area where the afternoon sun is especially punishing, protect the plant against the direct sun.

Extremely hot sun will burn and dry out the leaves and cause wilting.

How Often Do You Water Creeping Jenny and How Much Fertilizer Does It Need?

Creeping Jenny naturally grows in low-lying areas, so it is important to keep the soil consistently moist. As with most plants, this does not mean soggy.

Your Moneywort will do best if placed in a protected, shady area of the garden where the soil will remain consistently moist throughout the growing season.

Water deeply when the soil is just becoming dry, but don’t allow the soil to dry out completely.

Once established, a light fertilizing of 10-10-10 in the early spring should be enough for the creeping jenny ground cover to grow well.

Creeping Jenny thrives in well draining, pebbly, humus rich, moist soil. It can survive in drier, leaner soils, and planting in this sort of soil is one way of preventing it from becoming invasive.

In ideal soil, the plant will ramble freely and set down roots anywhere the stems touch the ground.

When planting Lysimachia be sure to give each individual plant 12″ to 18″ inches of space. These plants grow and spread quickly and provide rapidly growing groundcover.

It’s a good idea to keep Creeping Jenny pruned so that the foliage will remain upright and fresh looking. Additionally, if you leave it to ramble wild, it will quickly take over your garden.

The plant self-seeds, spreads by rhizomes and also rambles along setting down roots anywhere the stem touches the ground.

You can easily grow new plants through cuttings or division.

These cheery, hardy plants are not subject to serious disease or insect problems. If kept too wet over extended periods of time, they may be susceptible to root rot, rust and other fungal diseases.

Is the plant considered toxic or poisonous to people, kids, pets?

By all accounts, Lysimachia nummularia is non-toxic.

This enthusiastic, rambling plant can be quite invasive in the right settings. It can quickly overtake wildlands such as stream and riverbanks, roadside ditches, floodplain forests, swamps, and wet meadows.

It grows in a dense mat which can very easily smother out native plants. If you have it growing in your garden, take great care to keep it contained.

Moneywort is an attractive, easy-growing choice as a plant to surround your garden pond or to fill in bare, low-lying areas in your yard. It looks pretty as a groundcover, spilling over a stone wall or kept as a container plant or in a hanging basket.