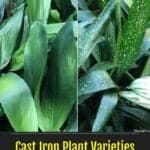 Aspidistra has a curious place in history, but only a few species are well-known among garden enthusiasts.

Bearing the “cast iron plant” nickname due to their ability to withstand extreme abuse, these plants are a prime example of how the genus got its name, which means “shield-like.”

While Aspidistras is native to southeast Asia, most cast-iron plants are from China, Vietnam, Taiwan, and Japan.

A member of the Asparagaceae family, botanical interest in aspidistras didn’t arise until the 1980s when they started becoming increasingly popular as houseplants.

There are somewhere between 93 and nearly 200 identified species at this time, with many possibly being variants of each other.

However, currently, only one species is commonly referred to as the cast iron plant, applies to Aspidistra elatior.

In addition to its many cultivars, specific cultivars from at least two other species (Aspidistra lurida and Aspidistra yingjiangensis) are also referred to as cast iron plants, even though their parent plants don’t share the name.

Aspidistra plants love the shade and tolerate everything from dappled sunlight to full shade.

As a result, cast iron is often used for filling in low-light spaces that few other plants can handle, such as the space underneath a deck.

The plants may also be grown in pots and handle indoor life quite well, making them perfect for hallways, bars, taverns, or offices.

Of course, they still need a little light, but you can go on a long vacation, and chances are your cast iron plant will still be alive and well when you get home.

Not all aspidistras bear the name of cast iron plant, but of the few species and cultivars that do, you can be sure of an almost fool-proof plant.

If you thought aloe vera was impossible to kill, check out these popular examples of cast iron plants that can all make aloe look fragile in comparison.

Aspidistra elatior aka “cast Iron plant” native to Taiwan and southern Japan, this plant is the one most think of when hearing the name “cast iron plant.”

Sometimes referred to as the barroom plant, this hardy species grows up to 2′ feet tall and about as wide.

They’ve earned their name because they can handle a lot of neglect and still thrive.

The species is surprisingly cold hardy and can be grown outdoors in USDA hardiness zones 7b to 11.

Their blooms only tend to appear outdoors and are small cream and purple flowers that appear near the base of the plant,

One of the few things this plant is susceptible to is a fungal infection, and a 2018 study produced evidence that these plants use fungus gnats as their primary pollinator.

Of course, you don’t want to encourage fungus gnats, so it’s easier (and more efficient) to propagate through division.

Hardy, able to grow in deep shade and bear attractive green leaves with a rich texture, has plenty to love with this species.

Unusual and quite striking, there’s little doubt how this cultivar got its name.

Asahi (あさ translates to あさ (as a = morning), 日 (hi = day or sun), which beautifully describes how this plant’s 30″ inch long leaves begin as full brown, then go through a stunning “sunrise” as the growing season continues.

It begins as a sliver of white forming along with the central leaf on the upper third of the leaf, slowly spreading until the top third is pure white.

The stunning display will last throughout the winter.

As with other cultivars, this cast iron plant keeps all the hardiness of its parent plant and may be grown outdoors in USDA hardiness zones 7 to 10.

However, this cultivar is also notoriously stubborn when grown in pots.

Make sure it gets a wide enough container, as its roots need a lot of extra space, and it won’t get its white markings if the roots feel cramped.

Out of the two popular variegated cast iron cultivars on the market, ‘Okame’ is a Chinese creation known for its attractive white stripes, which run the length of the leaves, while ‘Variegata’ has cream-colored stripes that may also have hints of lime or yellow.

The two cultivars are so similar that some growers consider them the same plant while others count them separately.

Whether you consider them one or two cultivars, the stripes on both can vary significantly in width, making each leaf unique.

Both may be grown outdoors in USDA hardiness zones 7b to 10b and share all of the resilience of their parent plant.

As stunning as many cast iron plant cultivars are, the Aspidistra ‘Milky Way’ tends to be one most people think of.

This shade lover is slightly less cold tolerant outdoors than the Aspidistra elatior cultivars, preferring USDA hardiness zones 8a to 10b but otherwise has all of the typical cast iron plant resistances.

Its claim to fame is the star field of tiny white specks covering its leaves, which are much brighter than those of similar Aspidistra elatior versions.

Initially discovered in the markets of Singapore, nobody knows exactly where this plant came from, but its popularity is unmistakable.

It has a reputation for being the tallest of all cast iron plants, standing to 3′ feet tall and up to 3′ feet wide.

The 2″ inch wide lanceolate leaves are a rich green with creamy splotches that one grower described resembling a green whip bearing a glass of milk.

Best planted outdoors in USDA hardiness zones 8a to 10b; they share the same tolerance for almost any condition as other cast-iron plants.

The plant is known to be resistant to both deer and verticillium wilt.