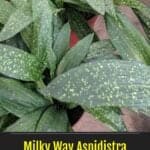 When you think of a cast iron plant, chances are, Aspidistra elatior ( ee-LAY-tee-or) comes to mind). However, many cast iron plants are actually cultivars of other species.

Such is the case with Aspidistra lurida ‘Milky Way’, a rare but spectacular member of the cast iron plants.

As with so many members of the Asparagaceae family, these bar room plants are cherished for being non-toxic and hardy.

If you’re lucky enough to get a milky way cast iron plant, you can be assured this wonderful plant will last for decades as a perennial, even though some growers may prefer having it as an annual.

Warning: Your ‘Milky Way’ May Be an Imposter!

It’s a sad fact that most US gardeners will order the wrong plant thinking it’s a ‘Milky Way’.

This is due to some common confusion regarding species and their cultivars.

Aspidistra elatior was once thought to originate from China, but it was later proven to be native to Taiwan and southern Japan.

Meanwhile, Aspidistra lurida (ass-pi-DIS-truh LEW-rid-uh) is native to China and is very similar to A. elatior.

The cultivar Aspidistra elatior ‘Hoshi-Zora’ has small white spots and the name translates to ‘StarrySky’.

Both of these cultivars are often sold as ‘Milky Way’, as are several other spotted cultivars.

However, you’ll know you have an authentic Aspidistra lurida ‘Milky Way’ if the plant has both bright white spots AND lighter green stripes.

These plants look very similar to common the common green cast iron plant in size and shape, which is one of the many reasons they’re often confused with cultivars of A. elatior.

For example, they tend to grow between 18″ and 24” inches and take their time in doing so at a rate of only 2 to 3 new leaves per year.

They also tend to have a longer lifespan than most houseplants, living 50 years or longer when cared for.

What sets ‘Milky Way’ apart from other cast iron plants is the combination of lighter green dots or speckles on a dark green background.

This pattern is what gives the plant its name, as the specks on the foliage resemble a view of the Milky Way galaxy in the night sky – a band of white surrounded by stars.

The leaves are evergreen, meaning you can enjoy this display all year around, although the oldest leaves may yellow and die off as winter approaches.

As with other cast iron plants, ‘Milky Way’ bears its fleshy flowers on rare occasion in late spring to early summer, but you may never notice them as they’re located at the base of the plant.

Unlike A. elatior’s purplish blooms, A. lurida plants have maroon to burgundy flowers, which are fleshy and look almost prehistoric.

It’s believed that these flowers may be pollinated by fungus gnats, much like A. elatior.

‘Milky Way’ is a deep shade-loving plant and will easily scorch with even brief exposure to direct sunlight.

While it can thrive in full shade, it’s best to give it some bright indirect sunlight for part of the day to ensure the variegation doesn’t fade.

It’s quite tolerant of fluorescent light and will thrive in offices or dorm spaces.

Another advantage to these plants is that they can easily handle low to moderate humidity, meaning you can grow them in especially arid places or at normal household humidity levels.

Grouping them with other plants (including other cast iron plants) is usually enough to give them all the humidity they need.

One of the reasons it’s important to make sure you have an actual ‘Milky Way’ is the fact that it’s less cold-hardy than A. elatior and its cultivars.

While the latter is cold hardy down to USDA hardiness zone 7, A. lurida and its cultivars are only cold hardies down to zone 8a when sheltered and 9 when exposed.

For this reason, you may wish to keep your outdoor ‘Milky Way’ plants in containers that can be brought indoors when the temperature drops to around 45° degrees Fahrenheit.

Normal indoor temperatures of 60° to 80° degrees Fahrenheit are perfect for these plants, although they’ll still be slow growers.

Overwatering is the easiest way to kill a cast iron plant, and ‘Milky Way’ is no exception.

Use the soak-and-dry method for these plants, watering only when the soil is dry halfway down the container.

They’re drought-tolerant, so if you forget to water them occasionally, it won’t cause major harm.

Remember, they’ll need even less water in winter, so avoid using a calendar schedule on these plants.

Your milky way cast iron plant is a very slow grower, so feeding with a slow-release fertilizer can do more harm than good.

Generally speaking, by the time it actually needs food, it’ll be time to repot it anyway.

However, if you feel you must feed it, give it a standard liquid houseplant fertilizer only once in spring and again in summer.

Cast-iron plants get their moniker because they can handle just about any growing situation.

This includes most soil types, provided they are loose and well-draining. Always use a pot with drainage holes.

Add some coarse sand to improve drainage and mix in some organic compost to help lower the pH, as ‘Milky Way’ likes an acidic soil of 4.5 to 5.5 best (although it will also grow easily in slightly acidic soils or even neutral up to 7.5 pH).

For container plants, just about any potting soil with an acidic to slightly acidic pH will work, although you may wish to add some perlite or coarse sand to improve drainage.

While these plants are very hardy, their roots tend to be sensitive to being disturbed.

Repot no more than once per year in the spring or when the plant has doubled in size.

You may also wish to wait until the plant is root-bound if the soil was organically rich.

Note that you may see some signs of transplant shock afterward, but the plant will recover.

These plants stand up to neglect quite well, but you’ll need to wipe down the dark green leaves with a damp cloth every few weeks, as they attract dust like dogs to mud puddles.

Pruning isn’t necessary, although you should remove any clearly diseased leaves to stop the spread of infection.

Division is the main method of propagating these plants, although you should tease the roots using fingers only.

Some growers have also reported success using leaves removed at their base, but there’s not enough data to confirm this as a viable method.

Outdoors, expect these plants to be both deer and rabbit resistant, as well as drought and shade tolerant.

They’re only mildly frosted tolerant and should be brought indoors or sheltered before any heavy frosts.

Mealybugs, scale insects, and spider mites are the most common pests, although you may also spot slugs and snails, which are occasional pollinators for cast-iron plants.

As with A. elatior, don’t be worried if you see fungus gnats (they’re a natural pollinator for aspidistras), although you may want to deal with them before they infest other nearby plants.

Anthracnose, leaf spot, and root rot are the three main disease risks, although you may see powdery mildew if there’s an infestation.

As with all aspidistras, ‘Milky Way’ is completely non-toxic to humans and pets, and the sap is not known to cause allergic reactions.

As with other cast iron plants, ‘Milky Way’ is a great addition for those difficult shady areas in the garden and under decks, including sloped surfaces.

In containers, ‘Milky Way’ is arguably the most beautiful of all cast iron plants and can be used as either a feature or accent plant.

It will thrive in artificial light, making it perfect for dorms and offices, and won’t suffer if you go on vacation.