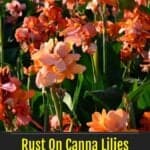 Canna lilies may not be true lilies, but they’re every bit as gorgeous in full bloom.

The Canna genus has over 30 species and even more cultivars, and it’s the sole genus in the Cannaceae family.

Canna lily is easy to grow and cold-hardy throughout USDA hardiness zones 7 to 10, you rarely have to worry about them getting sick, so long as you care for them properly.

Yet, Canna rust is one potential disease that can ruin the good looks of your cannas and even kill them if left untreated.

How To Treat Rust On Canna Lilies?

Canna rust is no joke, but it isn’t incurable like viral infections.

Let’s look at rust, how it happens, and what to do about it before and after an infection.

What Is Canna Rust?

Canna rust is a disease caused by Puccinia thaliae and is more prevalent in the southern states.

It can affect several genera beyond cannas, but cannas are its preference.

The spores can transfer via air or water and will feed on the plant’s living tissues.

While the infection begins in the leaves, the fungus can spread to the stems and blooms.

This fungus thrives in heavy humidity or excessive moisture.

Therefore, be extra careful when such weather conditions are present for several days.

Did You Know?: Canna lilies are grown as a food starch in many parts of the world. Thus canna rust can cause significant agricultural damage on top of looking bad.

Telltale Signs Of A Rust Infection

The first potential sign of a rust infection is the weather forecast.

Heavy, prolonged rains can create the perfect breeding ground for Puccinia thaliae, especially if the plants have no shelter from the storm.

The first sign of an actual rust infection is usually chlorosis or the yellowing of the leaves.

This yellowing will often be more mottled than yellowing caused by sun bleaching or other natural causes.

Flecks of brown may also appear among the yellow as it begins to spread.

Meanwhile, the fungus is setting up shop on the underside of the leaves.

It enters the plant through its stomata (basically a plant’s sweat pores and means of breathing).

As the fungus multiplies, yellow to tan pustules will appear along the midrib and veins, mainly on the underside.

Eventually, the bumps become numerous enough that they merge into rust-colored patches.

By this point, the top of the infected leaf will begin to develop brown necrotic spots that break apart and leave holes in the leaf.

But the infection doesn’t end there. The fungus works its way down into the stems and flowers, which will show similar symptoms.

Canna rust is resilient, so be careful when using fungicides against it.

Alternate your treatments between contact and systemic fungicides. This method is the best, albeit time-consuming.

Copper-based fungicides work well but can become toxic with extensive use.

For systemic fungicides, look for products with the following active ingredients:

Always follow any instructions carefully to avoid the risk of causing chemical burns or soil toxicity.

Sadly, canna rust is almost impossible to get rid of using natural methods.

The three most accessible treatment options are:

Bacillus subtilis is a natural bacteria safe for plants and the environment. It feeds on fungal spores.

When used as a soil soak, 100% percent cold-pressed neem oil absorbs into the plant. It serves as a systemic pesticide with some anti-microbial and anti-fungal qualities.

Neem won’t harm a fungus until it breaks past the plant’s surface but can help slow or even stop rust if applied every 2 to 3 weeks. It remains potent for up to 22 days per application.

Neem foliar sprays are good for the morning or evening after a heavy rainstorm or humid weather. But they only work if they directly contact rust spores.

Removing diseased leaves and disposing of them through burning is the best way to slow or stop the spread of infection.

If you’re in an area that doesn’t permit burning, you can drop the leaves in pure bleach for a day or two. Then carefully bag them for disposal.

There are many ways you can keep your cannas safe from rust.

One handy way is to place stakes around your garden to attach a tarp or clear plastic sheeting when there’s a storm in the forecast.

Be sure to anchor the rain cover so heavy winds won’t rip it off.

In general, try to buy cultivars that have increased disease resistance.

Always plant your cannas in a sunny location where they’ll get 6 to 8 hours of full sun per day.

This sun exposure gives them healthier growth and fuller blooms. It will also dry any moisture that gets on the leaves.

Always use the soak-and-dry method to water your cannas, ensuring you don’t get any water on the plant itself.

Ensure the soil remains loose and well-draining by adding an aggregate to the soil before planting. Also, provide organic compost to attract earthworms.