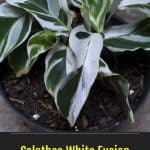 Prayer plants are commonly referred to by the genus Calathea (ka-LAY-thee-uh), although the scientific names frequently change.

Among these is a selection known as Calathea ‘White Fusion’, which is commonly known by several variations of the nicknames white fusion and peacock plant.

Calathea plants are members of the Marantaceae family and originally hail from the tropical rainforests of Central and South America.

This can make them a little tricky to grow if you aren’t prepared to give them the higher temperature and humidity levels they require. Although care beyond those requirements is easy to moderate.

White fusion is popular for its decorative leaves, which have green and white marbled patterns on their upper surface and a pale purple underside.

Most varieties of Calathea plants are moderately fast growers, achieving an average height and width of 12 to 24” inches.

Their large, lanceolate leaves are especially thin, even for a Calathea, and easily damaged if handled roughly.

Unlike many of its relatives, such as Calathea jungle velvet, white fusion is extremely difficult to flower indoors.

As very few people are fortunate enough to ever see this plant bloom, there is no real information on what color this hybrid’s conical inflorescence would be.

Calathea plants are known for having very thin, fragile leaves that can easily be damaged by direct sunlight. The leaves marks can fade and the plant experiences leaf curling.

This is further exacerbated by white fusion’s need for bright light to maintain its variegation.

Thankfully, the requirements allow for some leeway, and you can choose a spot with medium to bright indirect light.

Being native to tropical rainforests means your Calathea will require warm temperatures and higher humidity.

The perfect temperature range is between 60° and 77° degrees Fahrenheit, with the plant sheltered from any drafts.

Outdoors, USDA hardiness zone 10 is ideal, although it should be brought inside if the weather becomes chilly.

It can handle a humidity of 50% percent but prefers 75% percent or better.

You can help keep the immediate humidity up by sitting the plant’s pot on a tray filled with pebbles and water, although a spot in a bright kitchen is next to ideal.

Beyond light and temperature, the third biggest problem prayer plant newcomers have is moderating water.

All Calatheas are highly sensitive to the chemicals found in tap water (fluoride) and should only be given distilled water or natural rainwater.

During the growing season, water the plant when its soil becomes dry 1” inch down and 2” inches down in winter.

This may or may not happen at regular intervals because the plant gets much of its moisture from humidity, so you may find yourself watering more or less often at any given time.

As with most Calatheas, white fusion requires a highly diluted liquid fertilizer to avoid damage.

This particular plant prefers a nitrogen-rich mix, diluted to ½ or ¼, once per month right before watering.

Do not feed in winter, as the plant is dormant during this time.

There are two great soil options for this particular Calathea, the first of which is the ever-useful African violet mix.

Conversely, you can make your own blend of well-draining soil with 50% percent potting soil, 10% percent perlite, and 20% percent each of charcoal and orchid bark.

This cultivar is less sensitive to repotting than many of its cousins and may be performed once every two years or when it becomes root-bound.

Consider repotting annually with fresh soil, but it must be done with care.

Repotting should be done in early spring, one day after watering, and should only be placed in a pot one size larger.

When you remove the root ball, try to leave ⅔ of the original soil clinging to the roots to reduce transplant shock, and gently tease the roots, so they’re less bound.

While it can get finicky about heat and humidity, your Calathea fusion white requires very little actual maintenance.

Deadheading spent blooms will encourage new ones to spring up.

Occasionally wipe the leaves down with a damp cloth or paper towel, taking care not to rip the thin leaves.

You should avoid any form of leaf shine, as these can damage the plant.

Prune away any damaged or dying leaves to both improve the appearance of your plant and help it grow.

Avoid pruning too much, however, as Calathea plants can react badly to attempts at shaping.

How To Propagate Calathea White Fusion

As with other Calatheas, peacock plants are best propagated through division during repotting.

Simply tease the roots into two or three sections and place rhythm into their own pots, covering with plastic and keeping the soil moist until you see new growth.

Pseudomonas will attack plants that have been overwatered.

Aphids, mealybugs, spider mites, and scale are the most common insect problems with this plant.

Peacock plants, like the rest of their genus, are non-toxic to humans, cats, and dogs.

Related: Why Are My Calathea Leaves Curling?

Calathea white fusion thrives in terrariums, where it can enjoy the higher humidity.

It’s also well-suited for office environments when provided with a humidity tray or other source of moisture.

The plant also appreciates a spot in the kitchen or joining you in the bathroom when you take a long, hot shower as long as you’re careful not to let drafts hit it when you open the door.