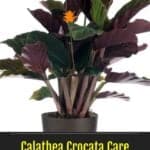 Before the Bangles graced us with their hit single, there was another eternal flame gracing homes all over the world: Calathea crocata (ka-LAY-thee-uh kro-KAY-tuh).

The Eternal Flame plant earned its common name from the gorgeous, long-lasting blooms that adorn it in summer.

However, it’s also a type of prayer plant, folding its leaves up in the evening.

A perennial member of the Calathea family Marantaceae, Eternal Flame was initially discovered in Brazil back in 1875 during a botanical expedition and brought back along with approximately 280 other specimens.

Fast forward a mere 100 years, and garden escapees have spread throughout Central and South America, even appearing in Hawai’i!

Despite an undeserved reputation of being a problematic plant outdoors, these are incredibly easy to care for once you know the basics, making them an excellent addition to almost any home.

These aren’t the biggest plants out there, which proves to be one of their most significant advantages.

With an adult height of 32″ inches and a narrow width, the plants can be easily grouped in small areas or placed on narrow shelves.

A central stem supports attractive, slightly wrinkled metallic dark green foliage that has purple to brown tones on the undersides.

As with all Calatheas and prayer plants, the eternal flame’s leaves open in the morning and close at night to make energy production and use more efficient.

The foliage does not have the striking leaf patterns like other varieties of Calathea plants:

Of course, this is the true glory of an eternal flame.

The plant flowers on and off throughout the spring and summer, with blooms lasting 2 to 3 months.

Stop using the bag when you see buds forming.

Bright, indirect sunlight is best for this Calathea plant, including dappled sunlight.

Direct sunlight for more than 2 hours per day (in the morning or evening) will lead to fading and possible scorching of the leaves.

Likewise, too little light or shade can hinder flowering.

Having adapted to the rainforest jungle floor, these plants absolutely love high humidity.

Avoid misting the plant, and instead, augment using either a humidifier or pebble tray.

While it’s possible to grow eternal flame outdoors in USDA hardiness zones 8 to 12, you will have to use a cold frame or grow tunnel to protect it when the temperature threatens to drop below 55° degrees Fahrenheit.

Indoors, the ideal temperature range is 65° to 85° degrees Fahrenheit.

You will also need to avoid exposing the plant to drafts or other sudden temperature shifts.

This plant is extremely sensitive to tap water, overwatering (leading to root rot), and cold temperatures, so only water using distilled water or natural rainwater at room temperature.

Using the soak-and-dry method, test the soil with your finger for dryness and water when it’s dry 1″ to 2” inches down.

As a general rule, a balanced liquid houseplant fertilizer diluted by half and applied monthly throughout spring and summer is perfect.

Just be sure to stop with liquid fertilizer in the fall and winter months while the plant’s dormant.

The basic rule for this calathea is to use well-draining, fertile soil.

From there, you have quite a few options.

You could get a potting mix designed for calatheas or marantas.

Alternatively, a general flower soil (such as Miracle-Gro) or organic compost with about 25% percent peat moss and some perlite or coarse sand can work wonders.

An excellent choice for a soil-free mix is to take 50% percent coco coir and 10% percent each of activated charcoal, fine pumice, perlite, vermiculite, and worm castings.

This last choice is especially useful because the worm castings provide vital nutrients while the charcoal helps remove toxins left by fertilizers and tap water.

As these prayer plants tend to stay small, you won’t need to repot that often.

Check annually for signs of root binding (such as roots peeking through the drainage holes).

If not rootbound, repot every 2 years to replace the soil.

Late spring to early summer is an ideal time, as the plant will recover more quickly.

These plants practically take care of themselves once you give them the right conditions.

However, you may occasionally need to prune away damaged or diseased leaves, snipping where the leaf meets the stalk. Wiping leaves with a damp cloth helps remove dust and pest infestations from the leaves.

While it won’t encourage new growth this season, some growers prefer to deadhead at the base of the flower spike, claiming it promotes fuller blooms the following year.

How To Propagate Eternal Flame?

These tropical plants are incredibly cold intolerant and will take damage at temperatures below 55° degrees Fahrenheit.

They also have a low tolerance for direct sunlight, drought, and low humidity.

Mealybugs and spider mites are the two most common pests.

Despite generally being resistant to disease, fungal infections aren’t uncommon due to the higher humidity – especially if you enjoy misting your plants. Don’t mist Crocata!

One of the best aspects of this particular calathea is that it’s completely safe and non-toxic for both humans and pets, meaning you won’t have to worry if some tiny hands (or paws) get too close to it.

Due to their lack of sensitivity, these plants are perfect for tables, shelves, and sheltered windowsills.

Grow them on their own or group with similar humidity-loving plants for a display that flowers throughout the growing season.