The “Lady of The Night” Brassavola nodosa is a PRETTY and EASY orchid to grow at home.

Called lady of the night because of its delicious evening fragrance (like Yesterday Today and Tomorrow plant), this modest cousin of the showy cattleya has delicate flowers with long narrow greenish-white sepals and petals.

Its pure white heart-shaped lip fans out from a slender white tube which often has tiny purple dots in the throat. 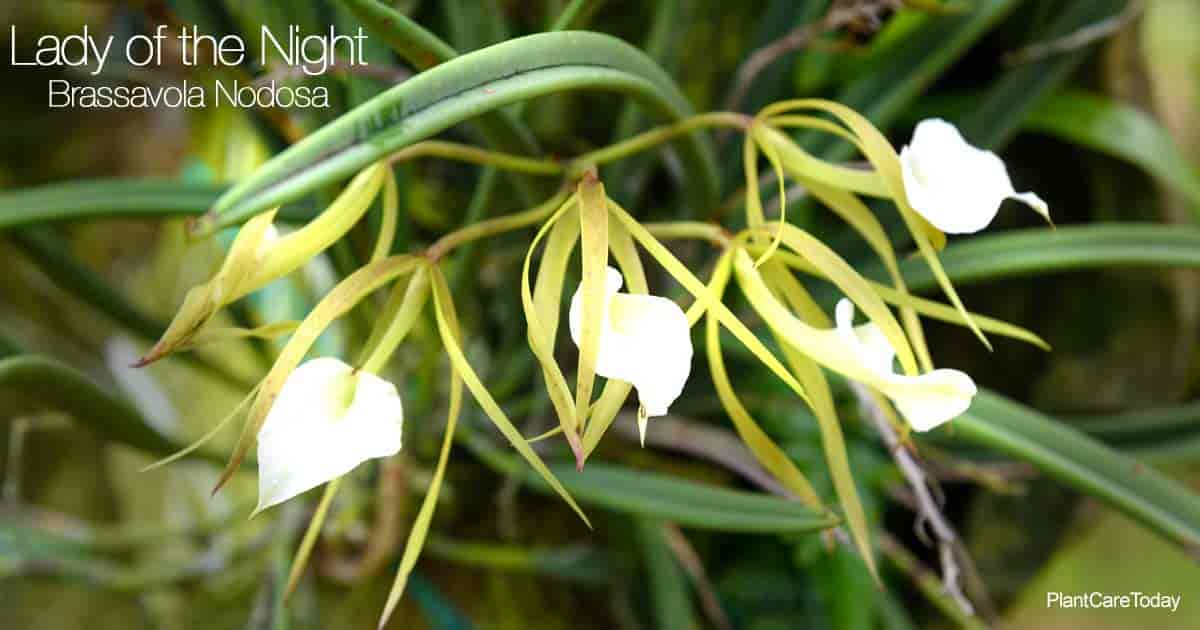 A single well-opened flower may measure over four inches across, but the measurement is deceptive since the sepals and petals are so slender and lacy.

The lip, on the other hand, though only about an inch and a quarter across, is so glistening white it looks much larger.

My first encounter with Brassavola nodosa was at an orchid nursery I started working at in 1970.

Bare root plants were bought it from an orchid importer along with some other orchid plants (Oncidiums) gathered from trees in Central America.

A mass of tough pencil-like leaves (somewhat bug-chewed) atop a dried-up root mass, unpotted and in a state of forced dormancy.

Some had apparently been growing up a vertical branch, as its leaves were almost parallel to the roots.

“Planting” Lady of the Night on Tree Fern

One of my first jobs at the nursery was mounting the Lady on the Night Brassavola on small slabs of tern fern by fastening the root mass on the slab with phone wire.

Over the year the nodosa, a hardy little practically unkillable plant, withstood the sieges and care of a young soon to be a commercial grower.

Along with hot and cold, sunshine and dimness, dryness and humidity of south Florida.

When first mounted, the nodosa plants, received water only by spraying the leaves and wetting the slab every few days. Soon new roots began to appear.

The roots showing on the surface would get green all over when wet.

The plant didn’t need watering again until the roots returned to their normal white color and the slab or if potted is almost entirely dry.

The only care given was monthly applications of very dilute house plant fertilizer and semi-weekly to weekly waterings.

In the bright, hot and stuffy, shade house the staunch nodosa was perky and happy, with its new growths reaching four to five inches high.

I noticed the tip of a bloom spike poking its nose above the papery sheaths that enclosed the base of one of the young growths.

With excitement I watched while the spike developed, revealing two, three, and finally four buds.

In early August each bud was about two inches long, and the first one began to open.

In two or three days all four of the flowers had completely opened and expanded to their full size and beauty. They lasted about two weeks.

During “bloom time” I stayed late several evening to experience the fragrance my boss told me was the ‘Lady of the Night”.

Each evening from about seven to eleven the flowers poured forth their delightful light fragrance – ambrosial enough to make growing the plant worthwhile even if the flowers were not so charming to look at.

No sooner had the blooms faded I noticed swelling bumps at the bases of the season’s now-mature growths.

The bumps soon took shape and became a new set of four growths.

When these were barely beginning to form roots in October, my boss had me cut the rhizome at several places and divide the plant into three sections which we pulled apart and mounted separately.

This was so the new growths would have room to spread out without becoming intertwined and tangled as they were threatening to do.

After this “repotting”, the new growths promptly sent roots onto the tree fern slabs.

They matured during the winter, but probably because of being drastically disturbed twice in a year, no blooms developed on that batch of growths.

The next year a new batch of eight growths was merrily springing from last growths and from dormant “eyes” on older growths. These grew quickly.

In early of the next year, long before I expected it, the first bloom spike could be seen – and another new round of growths was already starting as well.

By the time the first of the four blooms on that spike began to open two more bloom spikes appeared and were developing nicely.

The three spikes gave continuous bloom for over a month.

Even nicer than the increase in blooms over last summer is the fact that this year’s blooms were produced with the plants sitting right in an open south window sill.

No saucer of damp stones underneath to supply extra humidity, no special care.

The nodosa kept increasing the number of growths and blooms it made each time. Since the plants are compact they can grow on a windowsill in four to five-inch clay pots.

One big plant taught me many orchid growing lessons and supplied me with plenty of blooms to enjoy on the plant.

If you would like to grow a Brassavola nodosa there are commercial orchid growers selling established plants they propagated.

You should be able to buy a nice established blooming-size plant that will not need repotting for two years. It will probably be smaller than the original plant, I started with but it should grow and multiply quickly.