Alstroemeria [al-stre-MEE-ree-uh], commonly known as Peruvian Lily, refers to a genus of over 80 different species of flowering plants in the family Alstroemeriaceae.

The plant has South American origins, but most of the species have naturalized in North America and other regions such as Australia, New Zealand, and the Canary Islands. 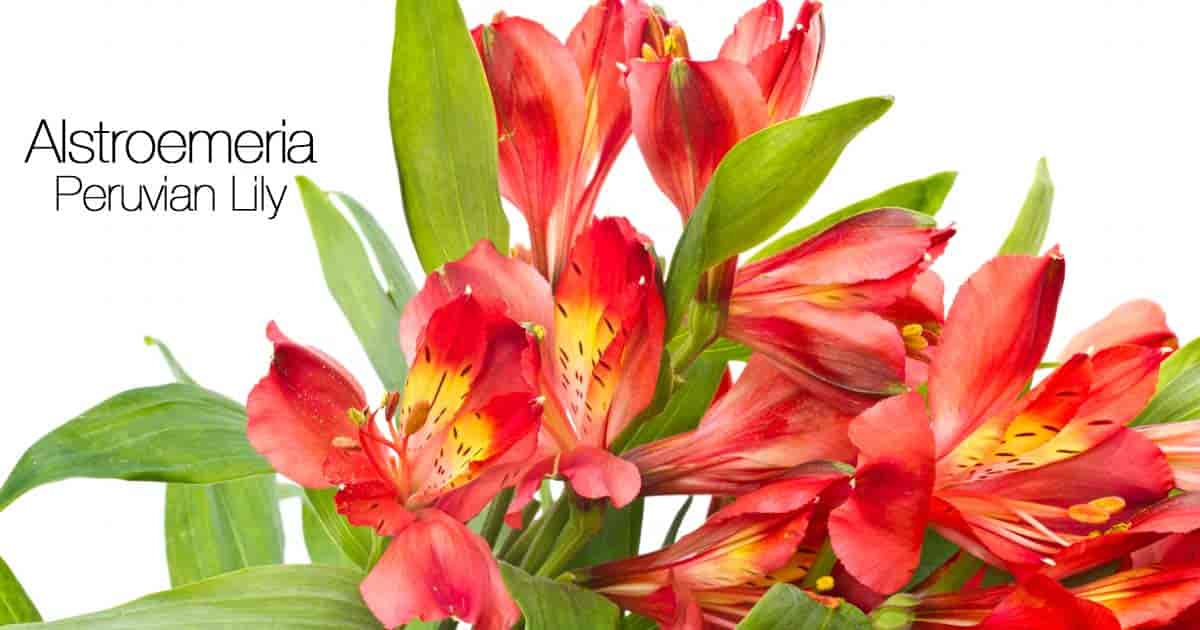 Alstroemeria is known by many other names:

The genus was named by Carl Linnaeus, the father of taxonomy, in honor of his friend and fellow botanist, Klas von Alstroemer.

For this reason, Alstroemeria flowers are believed to be a symbol of true friendship. They also represent wealth, prosperity, devotion, and good fortune.

Alstroemeria plant is a bulbous perennial and grows an average of 1’ – 3’ feet high and 1’ – 2’ feet wide and may require staking.

The plant has lively green leaves providing an impressive backdrop to the vibrant flowers.

From the beginning of summer until the first frost appears, Alstroemeria bears brightly colored flowers growing in loose clusters.

Each bloom measures about 2” inches in diameter.

The flowers are often streaked or freckled and come in a range of impressive colors, including deep pink, rich red, purple, yellow, apricot, orange/yellow, and white.

These vibrant, trumpet-shaped flowers are not fragrant but given their sheer beauty, and they are bound to catch every eye from afar.

Alstroemeria prefers a full sun or part shade and it’s suitable for growth in USDA hardiness zones 6 through 10.

Alstroemeria requires a lot of water and high humidity to grow properly from there tuberous roots.

However, while the plant benefits from regular watering, the soil must not be soggy.

Young seedlings need to be covered with a plastic bag to maintain humidity and must be watered frequently until the first shoot appears.

Once the young plant has established well, a 1″ inch deep watering is needed on a weekly basis.

Feeding is required when the plant turns two years old.

Supplement the soil with nitrogen and minerals such as potassium and phosphorous to boost plant growth and guarantee richly colored blooms.

Alstroemeria grows in a wide range of soil types but thrives in chalky, clay, loamy or sandy soil.

The soil must be moist but have good drainage.

Sitting in waterlogged soil carries the risk of making the plant rot.

When planting alstroemeria in pots, make sure there are sufficient drainage holes.

The soil pH level must be kept close to neutral.

Alkaline soil creates manganese and iron deficiencies and leads to the yellowing of leaves.

During the summer season, cover the soil with a thick layer of mulch (preferably 3” inches deep) placed around the base of the plant to prevent the roots from being damaged due to the excessive heat.

Both bark mulch and compost are suitable for the task.

When it comes to grooming, Alstroemeria is a relatively low-maintenance plant.

Trim dead flower heads to give a neat appearance and to ensure healthy plant growth.

Moreover, deadheading is essential if you don’t want the plant to multiply uncontrollably by self-seeding.

To promote the growth of more flowers, pull the old stems from the base of the plant rather than cutting them with gardening scissors or pruning tools.

How To Propagate Peruvian Princess Lily

Most of the species of Alstroemeria are propagated by division, but a few others are more suitable for seeding.

To propagate by division:

To propagate by seeds:

Alstroemeria is deer resistant but is susceptible to most of the common garden pests, insects and diseases.

Snails and slugs often feed off the plants whereas it’s common for:

… attack the plant as well.

Alstroemeria also suffers from problems such as root rot and Gray Mold caused by viruses and bacterial and fungal growth.

Alstroemeria makes a great addition to any place, be it a prim and proper garden or just a small collection of plants on a balcony by a home gardener.

Its bright and showy flowers make colorful mounds when planted in beds and borders, whereas the plant size also makes it ideal for use as a groundcover.

The plant has a relatively long vase life so bring some of its white, pink or red flowers indoors to add a pop of color to your living room.