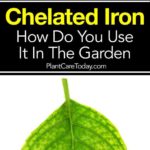 Iron is an essential nutrient needed by plants to function. Chelated iron like this is water soluble and iron supplements on plants are easy to apply. But we’re getting ahead of ourselves.

Iron is used up in some of the most vital functions of plants, such as:

For this reason, plants simply cannot function as they should without the presence of iron or iron supplementation. Iron chelate for plants is a great solution.

The symptoms of iron deficiencies in plants can be spotted with yellow leaves, usually between the dark green veins, which gives the leaf a spidery look. Plants and leaves lack that “healthy green” appearance.

This commonly referred to as lime chlorosis or iron chlorosis. With time, the leaves appear whitish, and start to die; resulting in stunted growth of the entire plant.

This can be quite frustrating to a gardener, especially with the unsightly yellow or whitish foliage. Chelated iron supplement is your best bet when treating iron chlorosis.

What Is Chelated Iron?

This is a soluble iron complex, primarily designed to make iron soluble in water for use in agricultural purposes.

In most cases, it comes as a darkish brown powder, and it can potentially be a mild irritant to the skin, eyes, and the respiratory membranes depending on the person.

A chelated iron fertilizer is one of the most popular and efficient methods of treating chlorosis.

In horticulture, chelated iron fertilizer is referred to as sequestered iron and serves as a plant tonic, where it’s mixed with other plant food products and nutrients.

For those who practice ornamental horticulture, iron chelate is widely recommended to feed plants such as Rhododendrons and Azaleas when the soil is calcareous.

Iron deficiency in plants is rarely caused by lack of iron in soil, because it is typically abundant in soil. The absorption of the iron is the issue.

However, a variety of soil conditions may restrict the nutrient uptake of a plant to get iron from the soil. Here are some of the causes of iron chlorosis:

The first step in diagnosing chlorosis is by performing a soil test. Your local agricultural extension center should help with this.

Keep in mind that they can also test leaf samples to determine exactly what nutrient, micronutrient or mineral is missing.

Although you may find out that your soil lacks iron, the problem could be from one of the causes listed above.

So, how to add iron to soil?

In this case, you should determine the underlying cause of the deficiency, and focus on treating it so you prevent the same problem from occurring later.

Evaluating the different causes of iron deficiency and correcting them can save you a lot of time and money spent on unnecessary and ineffective iron applications.

In general, iron can be applied in chelated form or as a ferrous sulfate as foliar sprays. Ferrous sulfate or ferric iron is comprised of about 20% iron. It’s quite an inexpensive fertilizer with iron, mainly used in foliar applications.

In pH of above 7.0, it can be ineffective when applied as a soil application, since iron will quickly transform to Fe3, which precipitates as iron oxides do.

Iron chelates are much better because the compound has stabilized iron ions, ideally preventing it from oxidizing and in turn precipitating away. The chelates contain three components in their formula:

In essence, different iron chelators will hold different strengths depending on the given pH levels.

Moreover, they differ in their vulnerability to iron ions replacement by other competitive ions. At high concentrations, magnesium or calcium ions can replace the iron ions in the chelate.

Chelated Iron EDTA: This compound is stable at a pH of below 6.0, and at levels above 6.5, almost 50% of the iron source will be unavailable. This means that this chelating agent will be ineffective in alkaline soils.

Additionally, this chelate has a high affinity for calcium, and it should not be used in soils (or water) rich in calcium.

Iron DTPA chelate: Stable in pH levels of below 7.0. It’s also not as vulnerable to iron replacement by calcium as the ETDA.

Iron EDDHA chelate: usually stable at pH levels up to 11.0. however, it’s one of the most expensive chelates available.

Be sure to use chelates during spring, before growth starts with the correct application rates.

Sprinkle some dry chelated iron for plants on the soil and irrigate, or dissolve in water and apply the chelated liquid iron around the base of the plants.

Iron chelates can also be applied in the holes surrounding the drip line of the affected plants.