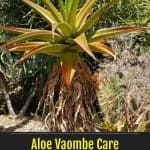 The Aloe Vaombe is a considerably large and beautiful, exotic, unbranched evergreen succulent.

The Aloe Vaombe is an Aloe species, part of the Asphodelaceae family, and native to Madagascar.

Its showy evergreen characterizes the succulent perennial with its rosette of arched, long, and dangling leaves. The leaves are fleshy, smooth, and dark green with white teeth-like thorns on their curved edges.

The “Malagasy tree aloe” is the common name for the Aloe Vaombe, pronounced [va-OM-bee]. The specific epithet comes from the indigenous word ‘Vahombre.’

The Aloe Vaombe’s height reaches between 8′ and’ 12 feet tall, with its diameters spanning between 4′ and 5′ feet wide.

This magnificent cactus tree grows in the dense wilderness of Southern Madagascar.

The plant blooms during late winter to early spring. The life cycle of it is perennial, enduring several years.

Vaombe Aloe produces red flowers in winter with a bloom size between 1″ and 2″ inches.

Its green leaves transform into a rich red color that sometimes fades into a pale yellowish or reddish-orange in the winter.

The plant is adept at growing in well-drained soils under full sunlight or light shades.

This aloe can grow in a variety of climates with temperatures as low as zero, but any colder, and the plant will deteriorate.

The water needs of the Aloe Vaombe are low, or it has a high tolerance for drought. So, watering it every three weeks or so is enough with even less during the winter.

Their large and protruding leaves and thick cuticle help them to adapt to dry environments by storing a significant amount of water.

Aloe species follow the crassulacean acid metabolism (CAM). They can capture carbon dioxide during the night and photosynthesize with closed stomata in the daytime. In turn, this helps such plants to cut water loss.

Aloe Vaombe can grow in loam and sand as soil. It reportedly also has a high tolerance for poor soil and various climates, but not freezing temperatures.

A container of 3 gallons or larger is suitable. While transplanting is possible, you should move perennials like this when it is in full bloom.

Learn more about fertilizer for succulents.

The only grooming deemed necessary is to pick up after any falling leaves.

Learn about what to do when succulent leaves fall off your plant.

How To Propagate An Aloe Vaombe

To propagate, consider the following steps:

The Malagasy tree aloe has virtually no diseases. But, it does produce nectar and can attract hummingbirds, bees, and mealybugs.

Note: The Aloe Vaombe’s razor-sharp leaves or teeth-like thorns may cause injury without proper handling.

The Aloe Vaombe is an ideal centerpiece or focal point because of its vibrant splash of red on its protruding leaves.

It also accentuates sunny terraces or decorative containers inside. It creates a decorative interest for summer and winter.

Plus, it is an excellent addition to your succulent garden, including Mediterranean gardens, beds, and borders, or a rock garden.

Historically, people harvested this flowering cactus from the wild for medicinal purposes. Like many aloe species found in Madagascar, people harvest the Aloe Vaombe for its leaf exudate, or “Madagascar Aloes.”