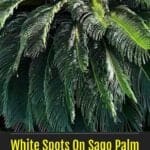 Dinosaurs are long gone, but that does not mean your family can’t enjoy your very own piece of the dinosaur age.

Cycads are known as living fossils, as they’re plants that have survived for millions of years with minimal alteration.

This slow-growing member of the Cycadaceae family is not only the recipient of several awards, but it’s also the most popular species for home growers.

Being as ancient as it is, the plant remains a mystery to many owners, who can be alarmed when they see the plant exhibit something they weren’t ready for, such as white powder.

It’s normal to see a bit of white powder on the male cone, as this is just the plant’s pollen.

But what about white spots elsewhere, and should you be worried?

As mentioned, a little white powder on the male cone is no cause for concern.

However, finding white spots elsewhere on the plant is likely either scurf or a severe scale infestation.

This scurf appears as small white bumps on younger growth and may be elongated.

Unlike scale on sago palms, scurf is unattractive but perfectly normal and will eventually flake off as the leaf gets older (remember such joys when you were a teenager?)

You can test to see if the white spots are scurf or scale on your plant by taking a sterile knife, gently removing a tiny bit of the white, and checking it under a magnifier.

Scurf will resemble dandruff or what you might expect if your skin gets too dry.

Meanwhile, scale insects will have a waxy appearance and may look slightly fuzzy.

In the event it’s just scurf, you’ll have to let the condition run its course, but you may still want to do a neem treatment (see below), so any sneaky scale won’t be able to hide among the scurf.

What are Scale Insects?

There are thousands of scale species, like the armored scale most of which feed off flowering plants, but some will go after gymnosperms (plants that produce seeds without flowerings, such as conifers, some cacti, and cycads).

Some of these species produce a hard waxy coating that protects them from predators and insecticides, while others are mobile and may even fly.

Mealybugs are a type of scale that are so common they are counted as a different type of pest than other scale insects.

Scale insects feed off of a plant’s sap, serving as one of Nature’s vampires. For example, the cycad scale is usually why you see sago palm leaves turning yellow.

When they first pierce the plant, the pressure forces sap through their system and out the other end.

This, as well as their fecal matter, is known as honeydew.

While the white scale slowly drains the life from your plant, its honeydew attracts fungal spores, especially powdery mildew and sooty mold.

Likewise, ants will harvest the honeydew for food and treat the scale as cattle, protecting them from predators.

Add to this the fact that cycad scale, such as Cycad aulacaspis, is a major problem in nurseries and can easily kill your sago palm, and it’s clear that spotting little white specks on the plant is a good cause for alarm.

Getting Rid of Scale on Sago Palms

The good news is that catching a scale or mealybug infestation early enough can save your plant’s life.

This doesn’t mean they’ll simply go without putting up a fight, though, and standard commercial pesticides won’t harm them.

Even worse, young ones can sometimes be carried by the wind, and scale insects love to hide on the undersides of leaves and in cracks and crevasses, making it difficult to destroy the colony.

Instead, you need to get creative with a combination of remedies.

Prune and Protect the Leaves

Emulsification is simply 1 to 2 teaspoons of eco-friendly soap, such as:

This breaks the surface tension of the water, allowing the oil to mix.

When you use horticultural sprays, be sure to soak every part of the entire plant, especially crevasses and the undersides of leaves.

Also, do this in the evening, after the bees and other pollinators have finished for the day.

Not only will this reduce the risk of harming beneficial bugs, but it will also prevent your sago palm’s leaves from getting sunburn.

Repeat this treatment every five days 3 to 4 times to get eggs as they hatch.

The second tactic is to use a neem soil soak.

This particular treatment is one of the best and most effective out there, but it takes time to work its magic.

Getting cold-pressed oil is important, as heat reduces its effectiveness.

Based on the size of your sago palm trees, pour the drench around the plant’s base in a radius roughly matching the root spread, being careful not to get any on the plant itself.

You will need 2 to 4 cups for young sago palms, adding to the amount as it reaches shrub and tree scales.

Azadirachtin, the active ingredient in raw neem, is absorbed by the plant and becomes a systemic insecticide, killing piercing insects and even some infections for up to 23 days.

Reapply every 2 to 3 weeks as a treatment or preventative.