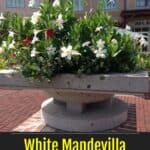 One of the many beautiful options for your garden is a happy climber by the name of white Mandevilla (Mandevilla boliviensis). This perennial from Bolivia has evergreen oval leaves (it can become deciduous in northern climates) and large white flowers with a yellow center.

Yet this plant is a bit of a mystery for those unfamiliar with its history. This mystery manifests when someone looks at the plant and says, “That’s a fine white dipladenia you’ve got there!”

You might have even seen it listed under this name on gardening websites. But is this beautiful plant a Mandevilla or…

Is a White Mandevilla a Dipladenia?

The answer, in its simplest form, is yes.

However, to understand why it’s called a Mandevilla and a Dipladenia, we must first examine how botanists have arrived at this conclusion.

Until recently, appearance meant everything when it came to classification.

Plants were grouped primarily by characteristics such as size, growth habits, flowers, and particular organs or behaviors (such as with prayer plants or succulents).

Mandevilla and Dipladenias have similar appearances but with a few key differences.

Taller vining plants were placed into the Mandevilla genus, while the shorter and bushier plants were in the Dipladenia.

Mandevilla makes its way toward the forest canopy with broad leaves and large trumpet-shaped flowers that tend to have reddish hues.

The flowers are smaller and come in shades of pink, red, white, and yellow.

Now that we’ve seen how the two genera were distinguished, how did they end up becoming merged into one genus?

Until recently, botanists only had observations to base their classifications on, which sometimes led to plants being shuffled around – especially since there are many different classification systems.

Then along came the ability to test the genome of plants.

A field of science known as molecular phylogenetics was first laid out as a theory in the 1960s and expanded upon the findings of experiments using protein electrophoresis that suggested the classification of various species needed to be re-examined.

Despite the essential words, the concept was simple: by examining the genome of various plants or animals to find common roots, it could be possible to make classification more accurate.

There was some progress using DNA-DNA hybridization between 19784 and 1986, but this method wasn’t perfect.

And then came the Human Genome Project.

Although the initial project completed only 85% of the genome mapped, the human genome project was a scientific breakthrough.

Not only did this significant collaborative effort lead to more effective computer software, but it opened the door for more accurate phylogenetics.

Botanists have mainly embraced these innovations, and many plants have been reclassified.

Some findings, such as the close genetic relationship between sansevierias and dracaenas, have led to a significant backlash, as the two genera were merged despite having many differences in appearance and care needs.

However, other mergers (such as Mandevilla and Dipladenias) have been largely accepted due to the close similarities in care and aesthetics.

So Where Does White Mandevilla Fit In?

White Mandevilla has always fit the description of a Mandevilla, with its climbing habit and oval leaves.

However, that hasn’t stopped it from being alternately described as Dipladenia boliviensis due to its white flowers and smaller height.

After studying the genome of this species and comparing it to Dipladenias, botanists determined that this plant was genetically quite similar.

All the Dipladenias were found to have a genome so similar to Mandevilla that the two genera were merged into one.

You’ll sometimes find white Mandevilla labeled as a Dipladenia on many gardening websites and in online plant shops because it can be hard to get used to new names for old friends.

The good news is that you can use general care instructions for both Mandevilla and Dipladenias interchangeably, so no matter what you call this excellent plant, it won’t be challenging to take care of and enjoy for years to come.