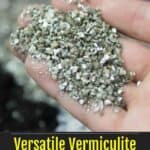 Vermiculite is often used in potting soils and as a medium for starting seeds and cuttings. Little has been said in its praise. Horticultural vermiculite is one of the handiest materials in the whole gamut of garden supplies.

For those unfamiliar with it, vermiculite stems from mica. Mica, as most people know, is a laminated or minutely layered mineral. Vermiculite is simply an expanded form of mica.

In particles of vermiculite, layers of laminae have spread out, leaving tiny spaces which act as reservoirs. These retain moisture in even distribution, plus it is free from soil-borne plant diseases, which renders vermiculite so valuable to gardeners.

The Pros and Cons Of Vermiculite Soil

My experience with it for starting seed have been in high germination. Furthermore, its complete sterility has eliminated the damping-off of seedlings, which has always been the plague of gardeners who raise seedlings indoors or in a hotbed or cold frame.

The only drawback is that vermiculite, much like sand, contains no plant nutrients. So it is necessary to transplant seedlings to the soil as soon as they develop leaves or else water them with a nutrient solution.

How To Make Vermiculite Full of Nutrients

To get around this problem, follow this procedure. Instead of filling flats and seed pans with potting soil in the usual way, fill them within 1/2″ inch of the average level and then sift 1/2″ inch of vermiculite over the potting mix.

This way, the evenly-moist, sterile vermiculite produces optimum seed germination while simultaneously preventing the damping-off of the seedlings in their early stages.

Then, as soon as the plant roots penetrate the soil beneath, the seedlings obtain the nutrients needed to keep them growing until they’re of sufficient size to be conveniently transplanted.

Anyone who has had to contend with:

… will readily appreciate the advantages of this method of starting seed.

Read: What Is The Difference Between Perlite And Vermiculite?

How To Use Vermiculite For Rooting Cuttings

A favorite use for horticultural vermiculite is as a medium for rooting cuttings. I have used it mainly for non-woody house plant cuttings, but doubt that it would prove just as excellent for rooting woody material. Its sterility and its even water retention are what make it so valuable.

As too often happens, when you only have one cutting to root and don’t feel like going to all that trouble of setting up a flat.

What I do is root all my cuttings individually in small pots.

Vermiculite’s even moisture retention keeps the cuttings uniformly supplied with water, without keeping excess moisture around the roots. Only a few drops of water per pot per day have to be added until they are rooted.

The tops could be syringed with water occasionally, but even without this precaution, and with no covering at all. I have had no trouble with wilting of cuttings in vermiculite.

I have also found it is much easier to insert cuttings in vermiculite than in any other growing medium. It is light when dry and is readily displaced so that cuttings can just be pushed into it.

When water is applied, the vermiculite tightens up as the water seeps through and holds the cuttings firmly in place. Rooted cuttings are removed with equal ease.

Vermiculite used several times in this way needs not to be discarded but used several times, provided it is sterilized before reuse. Do this by simply baking it thoroughly in the oven. It may also be saved and used for other purposes.

It makes an excellent medium for the water culture of tender bulbs used in place of pebbles.

It should be equally good for packing around any other tender summer-flowering bulbs or tubers. When the time comes to start the begonias and caladium into growth, use vermiculite.

It may also be an ingredient as a garden soil amendment in a soilless potting mix for house plants, its purpose is to lighten the texture of the soil mix. All in all, vermiculite is very versatile and has numerous great uses.