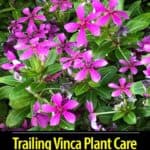 It belongs to the Apocynaceae (dogbane) family of plants along with:

It’s native to Madagascar and cultivated throughout the world as an ornamental plant and as a medicinal plant.

A couple of chemotherapy medicines contain extracts from the plant.

It also goes by many common names, including:

It’s a hardy plant and popular in subtropical gardens.

Periwinkle is the name often used to describe Vinca minor and Vinca major, which both have similar care needs.

The trailing variety of vinca is a small perennial (in warm locations) with a woody base.

It produces a mound of woody stems and glossy green foliage, reaching a height of about 6” inches to 18” inches.

It’s a low maintenance trailing plant spreading easily, making to a common choice for groundcover in a garden bed.

The leaves are oblong and measure about 2” inches.

The bushy foliage eventually produces phlox-like flowers in the summer.

The colorful clusters of flowers tend to last throughout the year until the first sign of frost appears.

They don’t produce a noticeable fragrance.

If plants grow in part shade and do not receive adequate light throughout the year, it won’t produce fuller blooms.

It can’t survive freezing temperatures in the winter.

In cool regions with warm summers, place the plant outdoors in sunny spots during the warmer months, and bring it inside for the winter.

If the outdoor conditions remain too cool for the plant during the winter, it tends to grow as an annual.

It may continue to produce blooms for several years before slowly dying out.

Overwintering the plant allows it to grow as a perennial in cooler regions.

Even though they have low water needs and are breed for heat and drought tolerant, never allow the soil to dry out completely.

If the soil doesn’t drain well, the excess water starts to promote rot or fungal growth.

TIP: Misting the plant helps to ensure it receives enough water without overwatering the soil.

From early spring to autumn, use a liquid fertilizer every two weeks when watering the plant.

Vinca catharanthus is not particular as to the soil type. For best results grow plants in well-drained soil, adding compost or other organic matter if the soil doesn’t drain well.

Adding a layer of pebbles below the soil also reduces the risk of fungal growth or root rot.

For plants grown in garden beds, top off the soil each spring and add a layer of mulch to help stabilize temperatures in the soil and moisture around the root ball.

How To Propagate Catharanthus Roseus

Propagate from cuttings or seeds.

To Propagate from Cuttings:

After about three to four weeks, the cuttings should take root.

The following spring, transplant to a larger container.

Look out for mealybugs and keep children and pets away from the plant.

All parts of the plant are toxic if ingested. Details on the Poisonous periwinkle.

It’s also a good idea to wear gloves when handling the plant or thoroughly wash your hands afterward.

Mealybugs are more of a problem when growing the plant indoors. These pests often resemble white cotton like bugs on plants and the foliage.

Use cotton swabs dipped in rubbing alcohol to wipe away the bugs.

Spraying the plant with a mixture of dish soap and water may also solve the problem. For severe infestations, treat with an insecticide such as Neem Oil for pest control.

One of the new varieties or selections you’ll find at the garden center is the fast-growing Mediterranean XP series.

Plant them with other heat-loving plants such as: