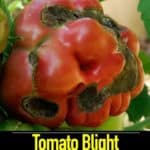 What is Tomato Blight? Tomato blight refers to a family of pathogens, caused by a fungus which spreads through tomato foliage, often during wet weather.

Early blight, as the name suggests, usually strikes during early tomato season, while late blight strikes in the mid-to-late season.

Although these diseases are made up of different microorganisms, the result is the same.

For tomato farmers, the destruction caused by the blight can be devastating making for a long growing season.

Early blight can occur for the infestation of Alternaria tomatophila or Alternaria solani, two species of fungi.

In places where it is absent, Alternaria solani causes blight in tomatoes.

Early blight on tomato plants is characterized by lesions that look like bull’s-eyes.

In tomatoes, the blight occurs in the oldest leaves first and is visibly seen as small brown-black, dry, papery brown spots with concentric rings, that measure up to half an inch in diameter. In some cases, the entire plant is infected and must be destroyed.

The leaf with the lesions may turn yellow. Mature lesions may become covered with velvety patches of fungal spores, while fruit spots have a dark, leathery appearance with raised concentric rings.

Early blight can cause collar rot, which turns stems brown, dry and sunken and results in the death of seedlings.

The blight spreads into the fruit via the point of attachment or wounds created by insects, infecting the entire fruit.

In warm and damp weather, the dark brown lesions on the leaves will rapidly grow larger, causing chlorosis and significant defoliation, leading to sunscald.

Infected fruits have black, blistered spots and can fall from the stem.

Caused by Phytophthora infestans – which means “plant destroyer” in Latin. Late blight does not just attack tomato plants, but potatoes as well.

These lesions are not bordered by leaf veins but can grow across them.

As they grow, the leaf spots in infected plants turn into large black and purple patches.

During moist weather, a white, fluffy growth surrounds the decayed area on the underside of the leaves. Infested tomatoes give off a foul, decaying odor.

Late blight is the worst kind of disease afflicting potatoes and tomatoes.

It is notorious for causing the 1840s Irish Potato Famine, during which a million people died and resulted in a mass exodus of over a million and a half Irish citizens.

The disease results in the tomato skin taking on a dark purplish color.

When the fruit is cut, the brown, granular rot with indistinct borders can be seen extending into the pulp.

Late blight can quickly kill leaves and travel down the petiole into the stem, killing the plant in its wake.

If storing tomatoes in warm and damp areas, the disease will continue to progress.

Moisture provides the perfect conditions for spores to multiply. Avoid watering your tomato plant from above.

Water the soil with drip irrigation around the base of the plant to keep foliage dry.

Watering should also be done in the morning so the plant has a chance to become dry during the day.

Plant resistant varieties and rotate tomato crops to different parts of your vegetable garden every year and do not plant near potatoes that are affected by blight.

Give tomatoes plenty of room to grow and stake them instead of caging them.

The airflow will keep the plants dry, and make it difficult for the rot to spread if the tomato plants are spaced apart.

If the plant gets infected, the surrounding mulch may house spores, and it needs to be taken off-site and burned.

Copper fungicides are also useful in fighting off early and late blight. Read the instruction label carefully and wear gloves to avoid getting fungicides on your hands.

However, it is important to rotate between different chemicals to avoid developing resistance in pathogens for certain fungicides.

Some active ingredients to control tomato blight include:

Make applications of chemical fungicides when environmental conditions are favorable and repeat as necessary.