Caused by Phytophthora infestans, a type of fungus, Late blight is also known as Potato blight.

It is one of the major culprits behind some of the worst potato famines in the past, including the famine 1840s European, Irish, and Highland potato famines. 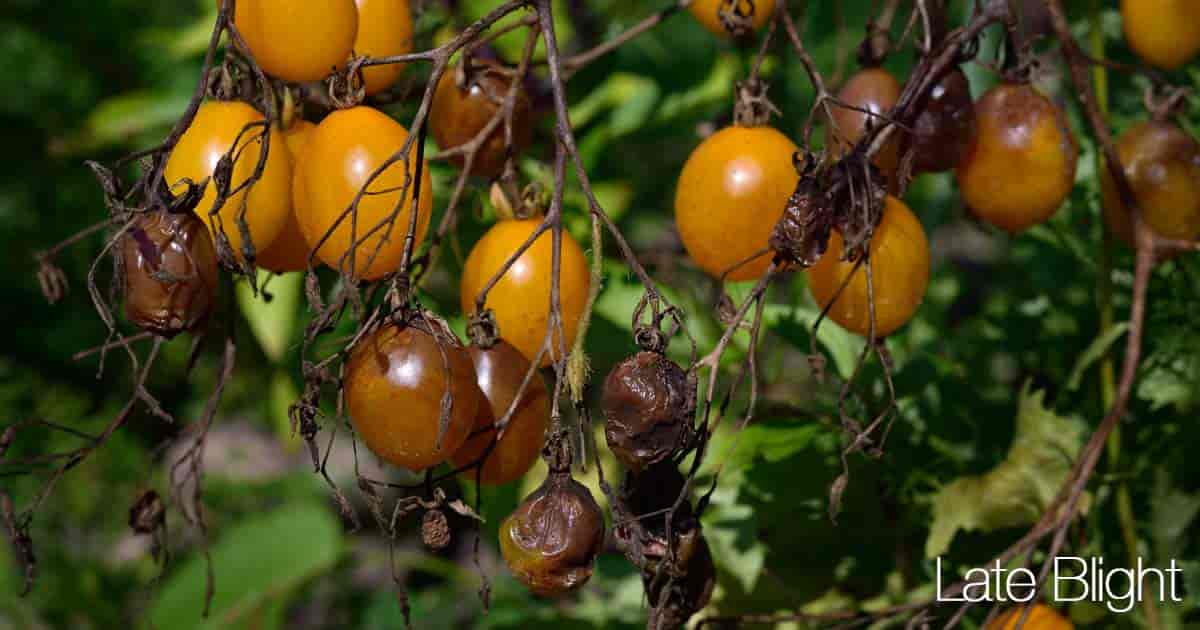 It belongs to the Phytophthora genus.

It is interesting to note the name of this genus originates from Greek words “phyto” meaning plant and “phthora,” which means decay or ruin.

The name is befitting as Late blight (LB) can ruin your entire crop!

What Is Late Blight?

Late blight is a disease caused by Phytophthora infestans, which is a type of water mold.

The water mold spreads through microorganisms or pathogens which thrive well in cool and moist environments.

In other words, plants are more susceptible to the disease in humid regions during the colder months of the year as the temperature ranges from 40° – 85° degrees Fahrenheit (4° C – 29° C).

Unlike most other fungal diseases, Phytophthora infestans does not overwinter in the soil.

It usually spreads through infected seeds, tubers, or plants introducing the bacterial spores to healthy plants.

One reason why this disease spreads quickly and easily is, sometimes, it spreads through the wind.

Keep in mind the bacterium is not airborne.

However, winds can carry infected spores to nearby plants.

What Damage Does Late Blight Cause?

It takes only two weeks for the disease to kill a plant.

The first signs of disease appear on older leaves closer to the ground.

When a plant is infected it is common to notice gray or green, water-soaked spots on the foliage.

As the disease matures over the next few days, the spots darken.

Eventually, the white fungus appears on the underside of the leaves.

It spreads, and the entire plant gets infected.

The leaves become limp, and ultimately, the plant dies.

When the conditions are right, and no preventative or recovery measures are taken, the blight can kill a plant in around two weeks.

Moreover, if an infected plant is amidst other plants, it is only a matter of hours before Late blight spreads to other plants.

This makes it important to take measures to control the disease as soon as the first symptoms appear.

How to Control Late Blight

Late blight can spread at a frightening rate. Therefore, it is important to take immediate measures.

Since it is caused due to fungus spores, it is advisable to apply a good-quality fungicide at the first signs of the disease.

Here’s a list of preventative measures to take control of Late blight.

Remember, it is possible to get rid of Late blight without having to rid the plant.

However, you have to act quickly in order to save your plants before it’s too late!