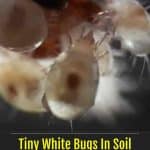 Your soil’s health determines your plant’s health, so it’s essential to monitor your soil and what’s crawling around in the ground or the pot. Often, uninvited bugs in soil are so tiny that they’re hard to see.

What Are Soil Mites?

Soil mites are tiny white bugs that are very hard to see with the naked eye. They’re smaller than the tip of a pen. They thrive in high-nutrient soil, especially organic garden soil. Soil mites are more common than you think — a 100-gram soil sample can contain up to 500 mites.

There are different types of soil mites, and most resemble the body of a tick or spider (they’re in the spider, or arthropod, family). The oribatid mites are the most common little bugs found in soil, decaying wood, and compost — anywhere with moisture and minerals in which they can eat and thrive.

What Damage Do Soil Mites Cause?

According to the USDA, there are four types of soil mites based on function: shredders, predators, herbivores, and fungal-feeders. Some eat worms, fungi, and harmful bugs. Others aerate the soil and help regulate what other organisms are living in the ground.

However, soil mites are pests and reproduce abundantly. When they thrive in indoor potted plants, they will infest the soil and can even make a mess on your floor. They can also invade parts of a garden and become visible on your plants. If there’s not enough decaying matter in your soil, they could turn on your plants.

How to Control Soil Mites?

Fortunately, it’s relatively easy to control tiny white bugs and infestations. Whether you want to eradicate mites from your soil or control their population, there are several ways to manage them.

Keeping your garden clean and clear of debris is one of the easiest ways to control any type of pest in your garden. Clear out organic matter that you’re not using. Rake up leaves and dead plants and deposit them in a compost bin or somewhere far away from your garden.

Overwatering your plants will keep the soil moist and create the perfect environment for soil mites while killing your plants. Don’t water your garden if the top layer of soil is still wet. You can also try aerating the soil by poking a few holes in the top layer.

If you want to go the chemical route, use insecticide. However, this should be a last-ditch effort; an insecticide is very harmful and can sometimes hurt plants. Most insecticides, even those labeled “organic,” harm the environment.

Consider using an insecticide soap or oil, which are known to be less harmful and non-toxic to humans.

Avoid using unnatural chemicals altogether and create your own insecticide. Making your own will ensure it’s safe for humans, animals, and plants.

Make Your Own Spray

Use a DIY insecticide spray made from vegetable oil to get rid of mites and other destructive bugs. Mix one cup of vegetable oil and one tablespoon of soap and shake it. Add a quart of water when you’re ready to use it. Shake up the bottle, then spray on your plant’s surfaces.

Check Out: White Oil for Plants

Mix one-and-a-half teaspoons of liquid soap and one quart of water. Shake the bottle and spray as needed. The spray works the same way as the above and will control soil mites, beetles, and other bugs.

If tiny white bugs are infesting your potting soil (indoor or outdoor), repot your plants with new soil. You only have to remove the top two inches of the soil, as mites don’t go deeper than that. Be sure to remove any decaying organic matter but be careful not to damage the plant’s roots.

Use brand-new potting soil rather than some you’ve had sitting in the garage for months. The new soil will be fresh and free of any pesky mites.

Related: Can You Reuse Potting Soil?

Now that you know what those tiny white bugs populating your soil are and how to control them, you’re set to keep your garden and houseplants clear of pesky insects. Use natural remedies, like cleaning your garden or repotting plants. Or, you can use an insecticide – or make your own.