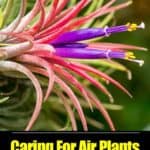 Tillandsia ionantha is one of the most colorful of the air plants, which are part of the genus Tillandsia from the Bromeliaceae family.

The air plants are unusual, in that they can grow on almost anything without the need for soil.

The ionantha air plant is native to Mexico, Costa Rica, Guatemala, Central America and parts of South America, and has become a popular ornamental plant throughout the world.

The small air plant produces a colorful array of shoots, ranging from pink to blue to purple.

While these plants appear difficult to grow due to their unusual characteristics, air plants are very hardy and air plant care is simple.

In fact, you mostly just need to mist the air plant occasionally.

Over 40 years ago I went on a plant collecting trip to Nicaragua. One of the small plants collected was the air plant Tillandsia ionantha – 10,000 of them.

I remember the terrain was barren with trees growing from crevices in lava rock.

The location was hot and very dry. But perfect for these air plants where they clung to trees in small clusters.

PRO TIP: Place your Ionantha air plant in a south-facing window or very close to fluorescent light and lightly spray every day.

Adding a little fish emulsion fertilizer to the spray would be appreciated.

The little Tillandsia ionantha is a favorite for many, simple easy plant care, and exquisite look. A little fountain of sometimes straight narrow or curving grey leaves that look almost dead until moistened.

With moisture, these air plants quickly turn a soft green for a short time. Growing in clumps a couple of inches high, they add character too often dull surroundings.

The air plant starts off small and features thick, green succulent leaves. The leaves stick straight up, such as a patch of spiky hair.

As the plant matures, the leaves turn a deeper shade.

These air plants rarely exceed more than a few inches in height and spread.

The tillandsia ionantha produces white flowers from the top of the plant.

At the same time, the upper parts of the leaves and foliage turn a brilliant red or pink color.

The air plant often gets about two to three blooms each season, forming on bracts. The flowers are about an inch across.

Tillandsia ionantha grows best in indirect sunlight. If the air plant receives too much sun, it tends to dry out. Strong sunlight may even scorch the leaves.

USDA hardiness zone 11 is the recommended climate for outdoor growth.

The air plant thrives in temperatures between 60 and 80° degrees Fahrenheit.

While it prefers warmer temperatures, with good air circulation and it doesn’t like dry conditions.

If the room where it’s placed is too warm or sunny, it may need a little more moisture.

Tillandsia plants can also grow under fluorescent lights, making it a great addition to an office or school.

Some air plants require regular soaking and allowing the excess water to drain off. As they don’t grow in soil, they soak moisture through the leaves.

Mist the air plant two to three times per week. If it’s hot or dry, the plant may need misting a little more regularly.

To feed the plant, add liquid fertilizer to the spray bottle before misting.

Use the fertilizer once per week during the warmer months and avoid fertilizing in the winter.

Details on How To Water Air Plants

Like the large Tillandsia xerographica, the plant doesn’t grow in soil. It attaches to other plants and can grow on wood.

Tillandsia ionantha plant gets mounted on other plants or objects. Common choices include:

To mount the air plant to an object, use glue or wire. A paper clip may even work as a temporary solution.

Within four to six weeks, the small root system of the plant should take hold of the mounting form or substrate.

The easiest way to propagate tillandsia ionantha is with offshoots. The pups grow around the base of the mother plant.

These offshoots should appear once the air plant matures. When they reach about half the size of the mother plant, separate the offshoots to grow new plants.

To collect the pups, use a sharp knife and carefully divide the plant.

These young plants may not be ready for mounting. For now, place them on top of peat mix and place in indirect sunlight.

Mist regularly and wait until the plants are healthily growing before mounting.

While tillandsia ionantha is relatively easy to care for, it can suffer from overwatering.

If the plant is accidentally overwatered, turn it upside down and then shake out the excess water.

Leave the air plant hanging upside down, allowing it to dry out before placing it back in its spot.

These plants are not toxic to animals or people. In fact, cats tend to like munching on the leaves, so it’s a good idea to place it out of their reach.

Pests rarely bother the ionantha air plant. As it doesn’t grow in soil, it absorbs fewer minerals that tend to attract insects and spider mites.

This doesn’t mean that pests won’t attack the plant. If mites or other critters infest the plant, rinse the plant and then hang it upside down to dry.

Outside of the humid Southwest, grow the plant indoors as a decorative house plant addition to any room or plant arrangement.

Attach ionantha to a piece of wood or another plant.

Glass globes are another option. Tillandsia ionantha grows well in globes, which are suitable for use in any room, even without bright sunlight.