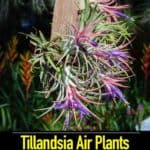 The Tillandsia [til-LAND-see-uh] is a genus that includes over 650 species and is part of the Bromeliad plant family.

These usually hanging plants are commonly called “air plants” due to their ability to cling to different surfaces, including trees, rocks, and even telephone wires.

Linneaus referred to Tillandsias as “Carnations of the air” and named “Tillandsia” for Elias Tillands. He was a 17th-century botanist known for his phobia of large bodies of water.

As this plant doesn’t need a lot of water, naming the plant after Tillands was a fitting tribute.

These plants come in many varieties, producing a wide range of colorful flowers. The plant itself requires minimal soil and can be grown from various organic materials.

In fact, the air plants are often sold attached to a piece of wood.

While these types of airplants are native to tropical regions, they are relatively easy to grow indoors as houseplants.

When the term “air plant” is used most of us familiar with plants immediately think of two famous Tillandsias.

This hanging Tillandsia we find throughout the south where the misty gray moss thrives as garland gracing massive bald cypress and oak trees.

Did you know that “Spanish Moss” is actually a Bromeliad?

Tillandsia ionantha – This Tillandsia plant is the one most people think of when hearing the term ‘air plant.”

These small Tillandsias are often “planted” on small pieces of driftwood or mounted on rocks as their “pot” or “air plant holder.”

How Big Do Air Plants Get?

Most varieties of air plants are not grown in pots. They’re typically attached to a branch or piece of wood, to make them one of the more interesting options for houseplants.

These plants come in many shapes, sizes, and feature a variety of colors and growth habits.

They also tend to produce thick, white fuzzy hair or scales that cover the entire plant. These tiny scales help trap moisture from the air.

As these plants don’t take root, they rely on this moisture for hydration. Some have rather “octopus-like” leaves.

The varieties sold as houseplants rarely grow more than a foot. They are small growers and can be combined with other plants.

When Does The Tillandsia Flower

The Tillandsias often flower in the summer, depending on the variety.

Some species can grow large flowers measuring up to two feet in diameter. Other varieties produce small, compact rosettes.

What Is The Best Lighting and Temperature For Air Plants?

Tillandsia plants are often divided into two groups – gray and green leaves. The typical plant care suggestions vary based on the type of plant.

For example, the Tillandsias with gray leaves can be placed in direct sunlight. They also enjoy warmer temperatures and should be kept between 55° and 65° degrees Fahrenheit during the winter.

Watering Tillandsia Bromeliads is a little different than the “traditional” method of watering Bromeliads.

When the active growth period begins, you should see new leaves growing from the plant. During active growth, add a weak water-soluble liquid houseplant fertilizer to your water and spray more frequently.

In fact, the Tillandsias with gray leaves should never be immersed in water.

What Type Of “Soil” Do Air Plants Need?

The most common way to grow an air plant is to attach it to an “airplant holder” like a piece of driftwood along with other plants in the Bromeliad family.

Wrap a little bit of sphagnum moss around the roots of the air plant and then affix the plant to the branch with plastic wire.

If you want to move the plant, you can simply repeat this process. However, you should avoid moving the plant frequently.

Grooming and Maintenance Of Airplants

Air plants do not require any “grooming” other than cleaning up any dried leaves or flowers.

How to Propagate Tillandsia

Tillandsias are propagated from seed or offsets. Growing from seed is incredibly time-consuming. It may take several years for the plant to grow to a mature size.

The easiest solution is to collect offsets. However, you first need to remove the plant from its current home.

Carefully spread the leaves near the base of the plant and search for the small offsets. Pull the offsets by the base to avoid tearing the leaves.

You can attach the offsets using the same method used for transplanting the air plant. Attach some moss and secure it to a branch or board with plastic wire.

The new plants should be misted every morning as they continue to grow.

What Are the Main Tillandsia Pests or Disease Problems?

These plants rarely suffer from pest infestations or diseases. They are also not an invasive species.

The only issue needing attention is dryness. If the plant gets dried out, the leaves may start to turn yellow or brown at the tips.

You can spray the air plants with water every couple of days. With the green-leaf air plants, immerse the entire plant in water occasionally.

Tillandsia plants are primarily used as a decoration and may be affixed to a board you can display on the wall.

Another option is to secure the plant to the branch of a larger indoor shrub or tree.

Yet another option is to take a unique piece of wood (many use driftwood), attach the Tillandsia to the wood, and create a “hanging air plant holder” for a bright sunny patio area.