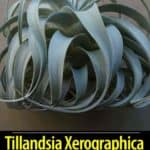 Tillandsia xerographica [til-LAND-see-uh] [zer-oh-graf-i-ka] a species of bromeliad, is one of the largest air plants capable of reaching over 3’ feet in size.

It features thick, wide leaves extending from a tight rosette.

Tillandsia air plants are often small and light, easily securing themselves to branches or pieces of wood.

Tillandsia xerographica is a different story.

A slow-growing epiphyte, the plant gets its name from the Greek words xeros (“dry) and graphia (“writing”).

Native to parts of Central America, including Southern Mexico, Guatemala, El Salvador, and Honduras, the plant belongs to the Tillandsia genus of air plants and the Bromeliaceae family of monocot flowering plants.

Due to the size of the plant, it’s referred to as the queen of air plants.

Besides needing high humidity and room to grow, this otherworldly-looking plant isn’t too demanding.

The slow-growing tillandsia air plant has a large rosette of silvery gray leaves.

The leaves taper to a point and may achieve a spread of 3’ feet or more.

The inflorescence appears from the center of the rosette from a thick, green stem.

The leaf bracts are a rosy-red color while the floral bracts become light green.

The petals of the tubular flowers vary from red to purple and may last for several months.

Tillandsia xerographica air plants prefer warm, dry conditions, such as the climates found in the southwest of the United States and parts of Central America.

During the winter, it can tolerate cooler temperatures, but it can’t tolerate freezing weather.

The air plant thrives in direct sunlight when grown indoors or outdoors.

If grown indoors, face it to the south where it can get more bright light throughout the day.

In a west-facing window, it’s more likely to direct sunlight in the evening.

While the plant can survive with indirect light, the leaves and inflorescences may not appear as bright and colorful.

As with other air plants like Tillandsia ionantha and Tillandsia cyanea, Tillandsia xerographica doesn’t need soil.

It obtains its moisture through the leaves instead of a root system.

People frequently attach smaller air plants to a piece of wood, bark, or another plant.

This jumbo air plant gets rather large and may not stay affixed to another object.

Instead of attaching it to something else, place the plant in a larger saucer or bowl.

You may even place it on a table or desk.

How to Propagate Tillandsia Xerographica

Obtain the seeds after the flowers die and begin to dry out.

Keep in mind it may take about eight years for the seedling to become a full-grown plant.

The king of air plants begins producing a pup about six months to two years after its first bloom.

The pup grows near the base and is relatively easy to remove.

Use a sharp knife to cut the pup away from the mother.

Do not cut through the pup or the base of the mother plant.

Keep the cut close to the area where the two connect.

After separating the plants, follow the same care instructions for the pup as the mother plant.

This large Xerographica Tillandsia is a showstopper houseplant in perfect condition.

Place it by itself on a table, in a terrarium, or on a desk near a large window to display its unique leaves and flowers.

If the summers get warm enough, take it outdoors to enjoy the fresh air, and bring it back inside when temperatures start to drop below 60° degrees Fahrenheit (16° C).