Talinum panciulatum [tal-I-num, pan-ick-yoo-LAY-tum] is a perennial succulent subshrub in the Talinaceae family, which includes 28 species of flowering succulents and shrubs.

The species was described in 1760 under the basionym of Portulaca paniculata by Nicolaus Joseph von Jacquin (Jacq), then recombined in the genus Talinum in 1791 by Joseph Gaertner (Gaertn).

It was assigned in the past to the family of the purslane (portulaca plant) or Portulacaceae. 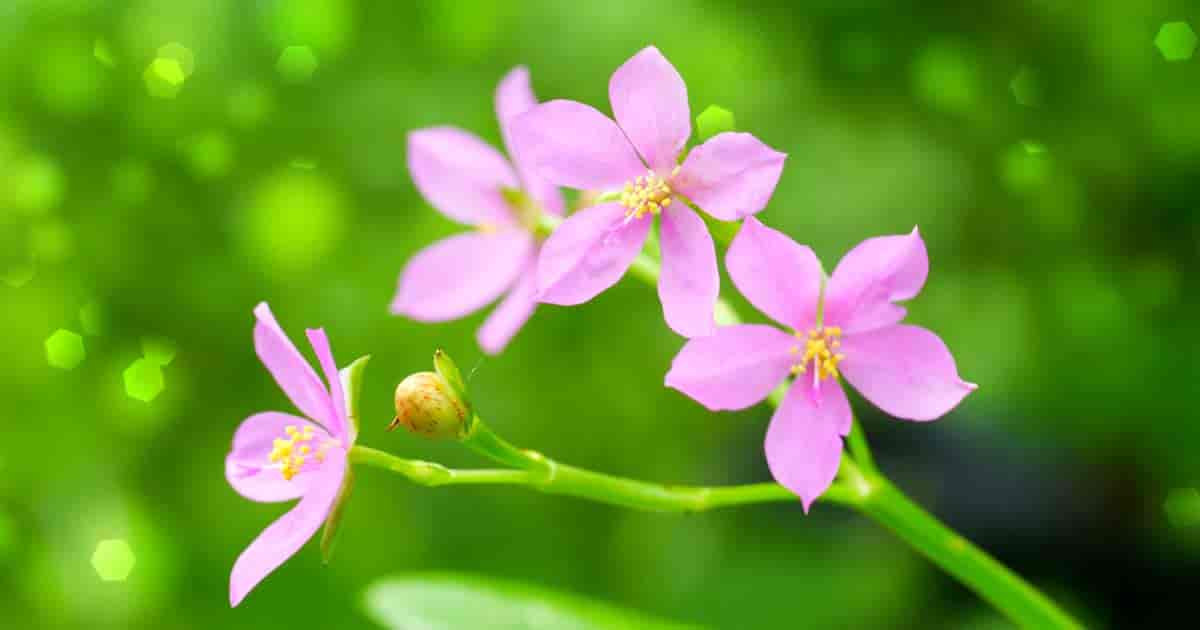 It’s native to much of the Western hemisphere, including the United States and the Caribbean.

The plant was also introduced in Africa and Asia.

This explains the most commonly used name for the plant – Jewels Of Opar.

The non-scientific names or common names include:

The plant requires lots of light and doesn’t fare well in cool environments.

In the right setting, it is an easy plant to cultivate.

While some species of talinum only reach 1’ – 2’ feet in height, talinum paniculatum var can reach up to 3’ feet when fully grown and bears tuberous roots with a ginseng-like appearance.

The leaves and the stems are often colored light to medium green.

T. paniculatum ‘Limon’ blooms in the spring and produces panicles of flowers.

The flowers produce jewel-like fruits, the reason for the plant being called jewels-of-Opar.

The color of the flowers can vary.

They don’t give off a noticeable fragrance.

The plant loves full sun and thrives when placed in a sunny window.

Even during the winter, the plant should remain near a source of bright, indirect sunlight.

Without adequate lighting, the plant produces duller and fewer flowers.

The plant can survive outdoor growth in USDA hardiness zones 10 or higher, but some people have successfully cultivated the plant outdoors in cooler climates.

In the summer, Jewels-of-Opar requires plenty of water and fertilizer.

In the winter, allow the soil to dry out between waterings.

Don’t feed during the winter.

Use regular potting soil with a little sand to improve drainage.

Perlite can help increase the water retention of the soil if the plant tends to dry out quickly.

Young plants may need transplanting as the root system grows.

Wait for the plants to become well established before transplanting them.

Older plants don’t require transplanting but may benefit from the replacement of the top layer of soil.

If the plant has a lot of leggy growth, trim it back during the summer after the flowers die.

How to Propagate Jewels Of Opar

Propagate with seed or cuttings planted in sandy soil.

Sow the seeds in the spring and take cuttings in the summer.

The seeds are very small.

The plant grows from seed very quickly and should bloom in mid-summer.

If the plant needs to overwinter indoors, take cuttings toward the end of summer.

Use sandy soil and place the plant under a bright light after the cuttings take root.

The seedlings and cuttings require frequent watering until established, but overwatering can cause several disease problems.

Allow the soil to become mostly dry between waterings and remove excess water after each watering.

The biggest threats include spider mites, aphids, and over-watering.

Another issue to watch out for is the spread of the root system.

If grown outdoors, the plant spreads easily and may overtake gardens and other patches of land.

The plant roots very easily and can still spread when pulled from the ground if any part of the root remains.

If grown outdoors, ensure it has space and avoid letting the growth become unmanageable.

These attractive plants look great on a balcony when they are in bloom.

As a succulent, they also work well in a succulent arrangement with other plants requiring the same environment.

The leaves are edible and have been used by the Chinese as a medicinal plant.

In places like southeast Australia, it grows outside year round.