Senecio Radicans [Sen-ek-ee-o, RAD-ee-kans] belongs to the Asteraceae family and is native to South Africa.

This succulent houseplant is known for its numerous strands of banana-shaped, glossy foliage.

Similar to succulent String of Pearls plant (Senecio Rowleyanus), S. Radicans is easy to grow and relatively hardy,  making it an ideal plant to grow for beginners. 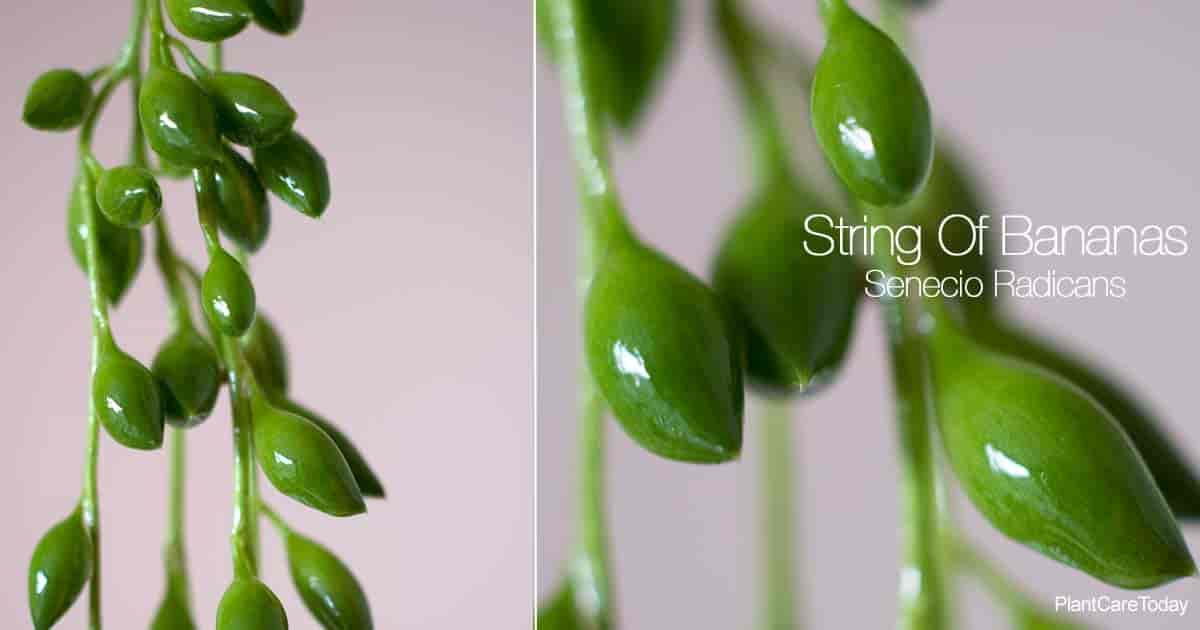 The common names include:

This plant produces elongated, glossy, and fleshy succulent green leaves, which taper and curve to a pointed tip.

These plants have a quick growth habit and quickly form long trails.

The leaves of this plant resemble a banana shape and are 0.5” – 1” inches long with two clear lines on both sides.

These flowers have a cinnamon-like scent.

Some gardeners are able to encourage the growth of flowers multiple times in a year.

Similar to other succulents in the Senecio genus, the inflorescences include various clusters of tiny flowers.

This plant is more famous for the texture, shape, and color of the foliage than their blooms.

The Fishhook Senecio prefers partial sun, so it is best to place them in the partial afternoon sun.

Since these succulents are not cold hardy, grow them as indoor plants if the temperature reaches 30° degrees Fahrenheit (-1° C).

Grow the plant in containers and put them in a location where it gets indirect morning sun.

This plant’s USDA hardiness zones are 9 to 12.

S. Radicans have the same watering needs as other succulent plants.

These are very drought tolerant plants, but they need water, especially in the summer season.

However, avoid too much water or standing water for a prolonged duration as this will damage the plant.

Make sure the soil dries out between watering, particularly during the winter months.

Moreover, feed the plant lightly once every year.

High amount of fertilizer may result in leggy growth.

Utilize liquid fertilizer used for cacti and succulents, which is high in phosphorous and potassium with low nitrogen.

The string of fishhooks prefers a fast draining and light potting mix.

At the time of rooting and potting the plant, use cacti and succulent mix to prevent potential root rot.

Transplantation should be done after every two to three years, but utmost care is crucial when repotting this plant as it tends to fall apart quickly.

Include potting mix in the container first.

Upturn the previous container carefully, gently support the plant with a hand, and place the root ball in the new container.

Top off with enough potting mix to cover the root.

This plant is known to reproduce during the summer season, and quicker when grown as indoor plants.

Avoid growing S. Radicans with other plants in the same container as it has the tendency to overtake other plants.

When growing indoors, the plant needs bright light in a partially shaded place and less water.

This low-maintenance plant needs plenty of room to trail, so select the position accordingly.

Prune the plant till the spot where its stem is firm if the trails start getting floppy.

Pruning, repotting, and division must be done during the early spring.

When growing in containers, place them outdoors during the summer season for optimal growth.

When there isn’t any frost danger, transfer the plant indoors during the fall season.

You may also like Senecio Peregrinus aka Dolphin Necklace plant.

How to Propagate Senecio Radicans

The Banana Vine is a prolific propagator.

Use a similar pot or container as the main plant to increase the spiller amount.

String Of Fishhooks Pest or Diseases

The String of Bananas doesn’t need too much maintenance and are typically free from pests and diseases.

However, be on a lookout for mealybugs and aphids.

Another common minor issue with succulents is the rotting problem which occurs too much watering.

This houseplant makes a unique addition to any garden or house.

It looks beautiful as a succulent hanging basket, as ground covers, succulent gardens, and other locations requiring textural interest.