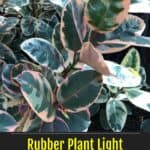 In the wonderful world of houseplants, some are easy to care for, and some are fussy. Some people think are problematic but simply want to be understood.

This last case usually occurs when a plant is given the wrong amount of food and water. Indoor plants such as the rubber tree (Ficus elastica) practically take care of themselves once you get the basic care needs down. For example, rubber tree light requirements.

As a tropical plant, the rubber plant (aka rubber tree) will only grow outdoors in USDA hardiness zones 10 to 11 and never reach its full 200′ foot height. Indoors, they tend to grow to a much shorter 10′ feet tall but still have the same needs.

One of the most common issues people face when growing a rubber tree is lighting.

Understanding how much light this plant needs can help narrow down the cause of various symptoms and ensure a happy, healthy ficus plant.

Ficus plants are native to tropical rainforests, and despite their incredible heights, they’re adapted to spend most of their life beneath the forest canopy.

This means you’ll want to position them, so they get some full sun but are also protected from harsh light.

A minimum of 6 hours of full sun (or the equivalent) is essential for healthy growth.

Sadly, this is one of the more sun-thirsty ficus plants out there, yet many guides claim it prefers low light exposure, leading to most of this plant’s problems.

Try to plant your ficus in a spot protected from direct southern exposure.

This can be a northeast or northwest spot where it gets full sun in the morning or evening (respectively) but will have some afternoon shade.

Note that mature plants may grow tall enough that their caps remain exposed even from these angles, but this shouldn’t affect their health too much.

Another option is to place them just north of a taller, sun-loving tree. In this instance, the larger plant will filter the sunlight, so it’s less harsh.

While limiting your outdoor ficus to a strictly northern exposure might seem like a good idea, this may stunt its growth due to a lack of light.

When growing a rubber tree plant as a house plant, life suddenly becomes a lot easier.

Unlike its relative, Ficus lyrata, the rubber plant isn’t a diva and won’t complain if you have to move it around a little.

This lets you experiment a little when you don’t know what window to place it.

Depending on your zone and the time of year, south windows can be a bust or boom.

For example, in a temperate climate during spring or fall, you might want to place your Ficus directly in a south-facing window.

However, in warmer climates and especially during the summer, the direct sunlight can become too harsh – especially when you consider that glass can amplify sun and heat.

In this case, you’ll want to either shift your Ficus beside the window or place a sheer curtain to filter the light.

This is generally the better choice, and both work equally well.

Choose an east-facing window when you want the plant to catch the morning sun so you can best enjoy its beauty as you wake up or have breakfast.

Alternatively, put it in a west-facing window so the sunset can frame it.

In both cases, the plant will still get plenty of light but be protected from the harsh midday sun.

Plants have a somewhat limited language, meaning symptoms can indicate many issues.

The following section isn’t an exhaustive list, but it will cover some signs more likely to be due to lighting problems than other causes.

Unlike humans, when a plant suffers sunburn, it can’t just grow out of the damage.

The following symptoms are all common to sunburned rubber plants:

When you see one of these symptoms and rule out other causes, you’ll need to move your plant to where it gets more indirect light.

Additionally, it’s best to prune away severely sunburned leaves (but only one or two leaves at a time so the plant can grow replacements).

You can usually cut away any browned margins on otherwise healthy leaves.

In most cases, the symptoms will go away if you move the plant closer to a window or augment the natural light with artificial lighting.

Here are the symptoms of poor lighting to look out for:

Hold your arm out and keep it out for a few minutes.

Does it start getting harder and harder to keep it held up?

Plants need to expend energy to keep their leaves up, and they’ll try to keep them aimed at light sources.

However, when the plant isn’t getting enough light, photosynthesis isn’t creating enough energy, and the leaves will begin to droop.

Moving the plant to a slightly sunnier spot should fix this problem after a few days.

This is especially visible in variegated varieties but will also happen in non-variegated plants.

The lack of light will cause the plant to become a duller shade of green or slowly lose its patterns.

As in most cases, moving it to a better spot will bring the color back.

Your rubber plant is well aware of where the light is and will try to get closer when it’s not getting enough in its current spot.

As a result, the plant will appear to be leaning or reaching toward a light source.

This problem can be fixed in one of two ways.

Turning the plant can help straighten it out, but this is only a temporary fix and will eventually lead to it leaning all over again.

The better fix is to move the plant closer to its desired light source.

Not only will it slowly straighten out, but you’ll also get much healthier growth.

Houseplants tend to grow leggy when they aren’t getting enough light.

Much like leaning, this is the plant’s attempt to find more light and leaves the plant looking scraggly and sparse.

This is a bit more complicated to fix because you’ll need to move the plant closer to a light source, then prune back a little at a time to restore its original growth habit.

You don’t want to prune more than a couple of leaves at a time, however, or your plant won’t be able to produce enough energy to replace them.

This is one of the easier signs to interpret.

Simply put, when your Ficus doesn’t have a lot of energy to spare, new leaves will be smaller and grow much slower.

Since the older leaves are already photosynthesizing to their maximum ability, the plant will prioritize these over new growth that won’t produce as much until they’ve matured.

Moving the plant to better lighting will solve this problem, although the already affected leaves may not achieve full size.