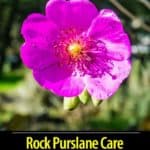 The Calandrinia [ka-lan-DREEN-ee-uh] a flowering plant species from the genus Calandrinia belonging to the Portulacaceae family and native to Chile, also found in some regions of Australia.

The common name for the plant is Rock Purslane. It’s popular as a cultivation option in regions of Western North America such as San Francisco where it is used as a popular accent plant in dry gardens.

There are many plant types of the Calandrinia plant:

The succulent foliage is very thick and blue-green in color.

They are easy to grow, care for, and are drought tolerant.

They provide ground cover, a great measure to stop the erosion of sandy soils.

The flowers of the Rock Purslane are one of the main reasons why the plant is so popular in gardens and for cultivation.

The purple flowers rise straight above the foliage and emerge from long stalks in a poppy shape at a height of about 2’ feet.

They come in many other flower colors such as bright magenta, pink, white, and red.

The pink flowers grow in small clusters and look very colorful and intense against the green leaves.

Their bloom time is from mid to late spring well into summer.

The poppy-shaped flowers are around 2” inches in diameter and have a sweet, strong fragrance.

If you live in a climate with hot summers, the plant will do wonderfully in light afternoon shade.

If you reside in any other area, the plant will do well in full sun.

The plant is drought tolerant and does not require much water.

During dry and hot weather you should be watering it occasionally.

After the ground thaws in spring, it is a good idea to spread a thin layer of mulch around the plant.

This will help the plant grow and bloom.

The best growing regions for the Rock Purslane is from hardiness zones 3-10 and for perennial plants, it is 8-10.

The best possible pH level for the plant is 5-6 but it will also survive in other conditions.

If you are growing the plant from seedlings, they should be planted in the soil with a spacing of about 8″ inches.

The soil should be gritty or sandy for the plant to grow well.

Some growers also plant Rock Purslane in containers but they need to be filled with a good-quality potting mix for this.

Mix in a little coarse sand to ensure the soil drains well.

The Calandrinia should be sown at a depth of 0.1” inches in the soil if you plan to plant it outdoors.

Plant it after the last frost of spring to avoid freezing of roots.

If you plant the Calandrinia in part shade, it will take around 8 weeks for it to start off before you need to put them out in full sun.

In late fall, it is a good idea to cut down the plant to around 6” inches to give it the best chance of survival.

When the last frost has passed, you will also need to add a thin layer of mulch around the plant.

Usually, these plants are low-maintenance since they are hardy plants.

They are also drought-resistant and don’t need any fertilizer to thrive.

How To Propagate Rock Purslane Cuttings

Calandrinia is easy to propagate.

You will be able to cultivate it easily by planting small cuttings from an already established plant.

This is a great way to replace any overgrown or old Rock Purslane plants.

You could also wait for the plant to self-seed but this takes longer and may look haphazard.

There are no known diseases or pests of the Rock Purslane.

These succulent plants are highly resistant plants found all year round.

They are deer resistant and don’t have any serious pests.

The Calandrinia has been a part of the native history of indigenous Australia.

It was even referenced in 1889 in a booked called “The Useful Native Plants of Australia.” Native Australians were known to mix it with baked bark for food.

The Chilean plant is also used for ornamental purposes in many gardens.

The contrast of the magenta flowers with the blue-green foliage is pleasing to a lot of people.

It is a popular flower in all sorts of rock gardens in most USDA zones.