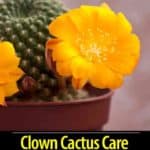 In the wild, Rebutia cacti are found in the hills and mountains of Argentina and Bolivia

It’s an ornamental plant popular for its flowers.

It produces an abundance of colorful petals covering its spherical growth.

Due to the profusion of flowers, people commonly call it orange crown cactus or flame crown.

As with most cacti, Rebutia fiebrigii doesn’t require constant care.

It grows easily if given lots of light and warm air.

Some of the popular varieties in the Rebutia species include:

Also lumped into the genus Rebutia cacti group are:

It consists of a single ball reaching about 6” inches in size.

Other varieties of Rebutia produce clusters of offsets near the mother plant making propagation easier.

Unfortunately, the orange crown cactus produces a single ball, which can eventually grow to cover the entire surface of the pot.

The flame cactus and other members of the cactus rebutia genus bloom in the spring.

It produces orange-red flowers with round petals that cover most of the cactus plant.

The flowers don’t have a scent, and some forms have short spines.

Some of the other species of rebutia cactus family produce various shades of:

Don’t move these succulent plants during the growing season to encourage a longer bloom.

Moving the plant can cause the buds to fall off.

The temperature should also be slightly cool.

Keep the plant in a room where it’s in the upper 60s most of the day.

The flowers may not last as long if the temperature gets too cold or too warm.

Many species grow in partial shade to full sun.

It’s best suited for USDA hardiness zones 9a or higher, allowing it to grow outdoors in summer temperatures of 70° degrees Fahrenheit (21° C) or warmer.

In the winter, it should never experience temperatures below 50° degrees Fahrenheit (10° C).

Set it near a bright, sunny window.

It may only need water about once every 3 to 4 weeks in the winter.

Always allow the soil to dry between waterings.

Too much water increases the risk of fungal growth.

Feed the plant with a fertilizer for succulents and cactus once per month throughout the spring and summer.

Grow the plant in a cactus mix or use potting soil combined with perlite or pumice.

If the soil does not drain well, add a charcoal or gravel layer to the pot’s bottom.

Transplant the plant if it outgrows its current pot.

As mentioned, the spherical ball may eventually grow to fill the entire pot.

This may make it difficult to water the soil.

Repot in the early spring before growth starts.

How to Propagate Orange Crown Cactus

Propagate with cuttings or seeds.

To propagate with cuttings:

To propagate with seed:

It tends to appear near the base of the plant and is more common when the winter temperature gets too high.

For minor rot, cut away the damaged parts of the plant and apply a fungicide.

If the rot becomes severe, the plant may not survive.

Propagate with cuttings before it’s too late.

If the spherical ball starts to shrivel, the soil may be too dry.

This often occurs after prolonged periods of drought.

Resume watering the plant to prevent damage to the roots.

The colorful flowers this plant produces make it a great addition to any cactus or succulent garden.

It makes a great houseplant.