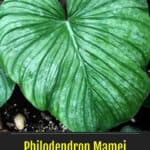 Hailing from Ecuador, the perennial Philodendron mamei (fil-oh-DEN-dron mah-MAY-eye) was first discovered in 1883 and has since become one of the most popular Philodendron species.

The plant has given way to several cultivars, and, as is often the case with members of the Araceae family, it’s often confused with its cultivars.

The most infamous of these mixups is Philodendron mamei ‘Silver Cloud’.

Despite several key differences, most websites claim the two plants are the same (and we’re not talking about genetics).

As a result, most of the common names for this species actually belong to the cultivars, and it’s risky to buy one from an online seller if you can’t see pictures first.

While philodendrons are best known for their epiphytes, mamei is a fast-growing creeper.

Support isn’t necessary, although it has been known to climb on rare occasions if sufficient support is provided.

As a creeper, the plant’s stem will usually only reach around 3’ feet in length.

Meanwhile, the leaves are supported on partially erect, reddish-tinged, olive green petioles and can grow to between 10″ and 18” inches long with proper care.

These leaves are elongated and heart-shaped with a semi-gloss upper surface.

A reddish-brown cataphyll surrounds new leaves, and mature leaves are a blend of medium green, dark green, and accents of near-white or cream.

This is in stark contrast to ‘Silver Cloud, which tends to be primarily silver-white.

Philodendron mamei produces an olive green spadix that rests on a cream-colored spathe that darkens to dark violet once it passes sexual maturity.

Of course, it’s almost impossible to get this plant to bloom domestically, and it takes more than a decade to reach maturity in its own native habitat.

As the plant is grown for its foliage, you aren’t missing out on much if yours never flowers.

Bright, indirect sunlight is the name of the proverbial game for this plant.

Too much direct sunlight, especially in the afternoon, can scorch the leaves.

Meanwhile, the plant can survive in the shade but will be stunted and lose its variegation.

Some good examples of proper lighting for this plant include:

Being a native of tropical forests, mamei loves a moderate to high humidity level.

50% to 70% percent humidity tends to work best, as higher levels increase the risk of fungal infections.

However, the higher the humidity, the bigger the leaves will get, so you’ll want to ensure it gets enough.

You can augment the humidity levels using a humidifier, pebble tray, or grouping it with other plants.

You can grow mamei outdoors in USDA hardiness zones 9b to 11, although this means less control over such factors as humidity.

Temperatures above 80° degrees Fahrenheit can result in stressing the plant.

Try not to expose the plant to temperatures below 55° degrees Fahrenheit, as this will severely stunt the plant’s growth.

Anything below 50° degrees Fahrenheit can cause permanent damage or even death.

Use the soak-and-dry method on this plant to ensure it always gets the right amount.

Begin by sticking your finger in the soil, and if it’s dry 2” inches down (approximately the second knuckle), it’s time to water.

Always use room temperature rainwater or distilled water for the best results.

Here’s what you need to do:

Because it’s such a slow grower, this amount will help bolster its growth rate without becoming toxic to the plant.

You’ll want a well-draining potting mix with a soil pH between 6.1 and 7.4 (slightly acidic to neutral).

While some sources claim it can also handle acidic soil (5.6 to 6.0), it’s always best to aim for somewhere around 6.5 if possible since most plants can handle this level of acidity.

Any standard potting mix with 20% to 30% percent perlite will work, although African violet mixes tend to be much closer to the soil philodendrons have adapted to.

Alternatively, you can make your own soil-free mix by combining:

Due to it being a fast grower, it’s best to repot this plant annually, as the roots are susceptible to being pot-bound and tend to grow faster than the rest of the plant.

Use this time to replace your potting medium, which removes any toxic buildup and provides more nutrition for your plant.

As the leaves are more than 6” inches long, they will benefit from being wiped down at least once per week to remove any dust accumulation.

How To Propagate Mamei Philodendron?

As with other Philos, it’s difficult to get this plant to bloom, leading botanists to propagate the plant through tissue cultures far more often than by seed.

However, you can easily create more at home through:

Mamei has the same general resistance to pests and disease as other Philos, although too much humidity can lead to fungal infections, Erwinia blight, and root rot.

Likewise, they can become infested if the plant is exposed to:

Please remember that philodendrons contain high levels of calcium oxalate, considered an irritant in many cases and mildly toxic to humans and pets.

As a creeper, this plant works best in hanging baskets.

Outdoors, it works well in borders and mixed with low-lying groundcovers.