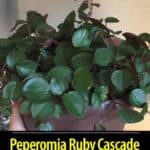 Most peperomias come from tropical and subtropical parts of Central America and South America.

The name “peperomia” comes from the Greek words for pepper (peperi) and resembling (homoios). In fact, the plants are closely related.

Ruby Cascade has more of a trailing vine compared to common peperomias, and it produces reddish conical flowers.

Besides Peperomia Ruby Cascade, some nurseries label it as Ruby Peperomia.

It’s a trailing plant with stems slowly extending over the edges of a pot or hanging basket.

It’s not very big, reaching a few inches in height, but the vine-like stems may reach several feet if allowed to grow without grooming.

Peperomia ruby cascade produces small, round pink flowers in the spring. Unfortunately, the flowers are insignificant and may not always appear.

In the US, it can grow outdoors in USDA hardiness zones 9a to 11b.

If temperatures drop below 50° degrees Fahrenheit (10° C) in the winter, grow it indoors or bring it inside for the winter.

It needs very little water and overwatering increases the risk of root rot.

However, they still require more water compared to other succulents.

While Peperomia ruby cascade has succulent leaves, it isn’t a true succulent. It needs higher humidity and additional watering.

Avoid letting the soil remain completely dry for too long.

Check the soil frequently, allowing it to dry out between each watering, but don’t let it stay dry for a prolonged period.

In the winter, Peperomia ruby cascade doesn’t need as much water. Keep the soil moist, but not overly soggy.

Fertilize the plant using a diluted liquid fertilizer every other week during the spring and summer growing seasons. Don’t fertilizer in the fall or winter.

Ruby peperomia grows best in peat-based compost instead of using regular potting soil. Always use a pot with drainage holes.

Frequent repotting may harm the plant. As it’s a slower grower, replanting shouldn’t be needed for several years.

Transplant mature plants in the spring, before new growth begins.

Grooming isn’t needed unless the trailing vines grow too long.

Cut back the growth on this house plant at the end of the fall season, before the plant goes mostly dormant for the winter.

Use pruning to control growth and size, removing damaged foliage and large stems. This is also a good time to collect stems for propagation.

For complete details check out this article: How To Propagate Peperomia

TIP: For best results, place the propagated plants over a heat source, such as a radiator.

Ruby peperomia doesn’t need much counter or garden space, but its vines can grow quite long.

Choose a spot for this easy to grow plant where the trailing vines remain free to spread, such as in hanging baskets on a patio or sun porch.