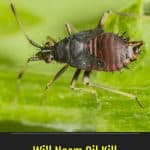 You’ve probably heard of springtails but have never given them much thought. These hexapods are a vital component of your garden, breaking down organic material and attacking fungus.

With over 700 species in the US alone, springtails are only about 3/64 to 1/8” inches long, making them almost impossible to spot.

However, there are times these tiny critters can become so plentiful they become a nuisance pest.

A normal-sized springtail population may usually benefit plants. However, some species can damage plant roots or young growth.

This, when your springtail population becomes too big for its britches, it’s time to take action. But these hexapods aren’t insects, so will something like neem oil have any effect?

The good news is that neem oil can kill springtails.

More importantly, you can regulate a neem regiment to keep a springtail population under control without wiping these beneficial bugs out completely.

As mentioned, springtails can be incredibly beneficial to your plants, but you can accidentally encourage a population boom.

Considering these materials can also retain water and lead to root rot, it’s usually best to use them sparingly.

As an adult female can lay as many as 400 eggs and some species reproduce asexually, it’s generally a good idea not to give them a reason to lay more eggs.

Another thing to keep in mind is that springtails prefer decaying roots and moist environments.

This means an infestation-sized population has discovered root rot or some other root damage issue you may not have been aware of.

When the population gets too big, they’ll sometimes chew on healthy roots as well.

The good news is, springtails won’t eat ¼ of the root system, which is the percentage at which a plant can no longer recover.

Third, springtails are attracted to excess moisture, as this is an indicator that mold or mildew may be present.

Overwatering your plants or allowing them to remain in standing water can not only lead to a springtail population explosion it may also cause root rot or other types of mold or fungal infections.

Neem foliar sprays are ineffective against springtails unless you manage to catch them on the soil surface.

However, neem soil soaks or drenches, and neem cakes are both highly effective.

Azadirachtin is a potent natural insecticide that mimics the hormones in insects.

When ingested, it can cause the springtail to starve itself.

It can also cause infertility in adults and prevent springtail nymphs from reaching adulthood.

More importantly, they double as a fertilizer and vary in NPK depending on the manufacturer but are usually around 4-1-2.

Both neem cakes and oil have fungicidal properties that can help plants fight off root rot.

Break up the cake and amend your soil according to the instructions on the package.

It’s important to remember that the cakes have an NPK rating, so be sure to adjust your usual fertilizer accordingly.

Neem cakes can be a good choice with springtails because you’re only applying it a couple of times per year.

This will prevent the springtail population from getting out of hand without eliminating it.

Soil soaks are easy to mix and apply.

Next, add two tablespoons of raw neem to the mixture.

Test a tiny portion of the plant and wait 24 hours to ensure the plant isn’t allergic or sensitive.

Once you know it’s safe, pour 2 to 4 cups of the soak onto the soil over where the roots are, being sure to cover a radius roughly equal to the root spread.

Inside the plant, the Azadirachtin becomes a systemic insecticide, protecting the plant from biting or chewing bugs for up to 22 days.

You can reapply the soak every 14 to 21 days when watering your plant until the signs of infestation are gone or as a preventative.

Remember, springtails are actually beneficial, so the goal isn’t to kill the entire population, to get it back under control.

Other Options To Control Springtail Infestation