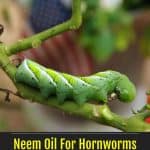 It’s not uncommon to spot butterflies or moths hanging out around your vegetable garden, but not all of them are beneficial. Even monarch butterflies can be a problem while in the caterpillar stage.

However, hawk moths are by far the worst problem. Some species in the Sphingidae family of moths will lay their eggs on plants.

The resulting larvae, commonly called hornworms, feed on these plants until they’re ready to enter the pupal stage.

Chances are, you’re already using neem oil on tomato plants, but will this natural remedy work on the hornworm as well?

Can You Use Neem Oil For Controlling Hornworms?

It might be of little surprise that neem oil can combat some species of the hornworm.

There are two species in particular that attack crops for which Neem is a viable solution.

Which Hornworms Will Neem Destroy?

In theory, neem oil will work against all 1,450 species of the hornworm.

However, adults don’t always lay their eggs on plants that have been domestically cultivated.

We’ll focus on two specific species, although the neem treatments should apply to any other species which attack your garden.

The official name for this pest is the five-spotted hawkmoth.

As the common name suggests, adults will lay their eggs on tomato plants and other members of the nightshade (Solanaceae) family.

The adults are most often attracted to plants with large, fragrant white flowers where they drink the nectar and lay their eggs on nearby crops.

The eggs are often placed on young growth near the plant’s stem, and the resulting green caterpillars will munch on the plant, venturing further out to portions that have partial shade cover during the day.

Visually, tomato hornworms are green with 8 V-shaped white markings along their abdomen and a rear-facing horn on their last segment.

Like the five-spotted hawkmoth, the tobacco hawk moth also known as the Carolina sphinx moth.

Much like their siblings, they feed on members of the nightshade family, although this species prefers tobacco when available.

Unlike tomato hornworms, tobacco hornworm caterpillars have straight white markings, and their rear horn is red.

Children in the south sometimes raise this species as pets, nicknamed goliath worms.

Two of the three forms of Neem are effective against hornworms:

The third, neem cakes, are used primarily as fertilizer and are most effective against ground-based threats.

100% percent cold-pressed raw neem oil is the unmodified extract from Azadirachta indica and contains Azadirachtin as its primary organic insecticide, along with four other active ingredients.

This form of Neem is too powerful for topical applications but is used as a soil drench.

When ingested, the Azadirachtin mimics the hornworm’s hormones, causing it to stop eating.

It also can arrest development into the pupal stage, preventing the hornworm from reaching adulthood to reproduce.

This form of Neem contains .5 to 3% percent Azadirachtin, so it is safe for use topically.

Note: Neem oil is non-toxic to humans in small doses, so it is safe to treat your tomatoes and other food crops. However, it is best to perform a soil soak or foliar application at least 24 hours before harvesting, so there’s less contamination.

Neem is far too potent to use straight, so it must be diluted into an emulsion.

To create an emulsion for food crops, use ⅓ teaspoon Dawn dish soap or pure castile soap (it’s safe to use up to 1 teaspoon) per quart of lukewarm water or 1 teaspoon per gallon.

When going for a topical application, mix 1 teaspoon clarified neem oil per quart and put it in a spray bottle.

For Neem soil drenches, use two tablespoons of raw neem oil per gallon.

Using Neem Oil To Get Rid Of Tomato Hornworms

Always test a small area of your plants 24 hours before a full treatment to ensure the plant isn’t oversensitive or allergic to the neem oil.

For the neem soil soak, pour 2 to 3 cups around each plant, making sure not to splash the stem.

The plant will absorb Neem, mixes and becomes a systemic insecticide for up to 22 days.

Hornworms and other pests that feed on the plant will ingest the Azadirachtin, while bees and other beneficial insects will go unharmed.

You can perform a new soil drench every three weeks to act as a preventative against pests, fungal infections, and some bacterial and microscopic threats.

Unless you have other garden pests infesting your plants or a fungal issue, you will have an easy time using the foliar spray.

Simply head out during dusk or dawn (so beneficial insects won’t come in contact with the neem oil) and spray a nice coating over every hornworm you see.

The oil is highly sensitive to UV rays and will completely dissolve 45 minutes to an hour after application, leaving behind only the dead caterpillars.

You will need to repeat the process every 7 days to ensure any hatching eggs don’t get a chance to feed.

Use foliar sprays to coat the entire plant once every 14 days as a preventative against infestations and topical fungi such as sooty mold.