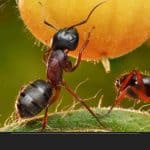 There are a lot of pests that directly harm plants, and then there are ants. Ants can be quite beneficial to your garden, aerating the soil and improving drainage.

Does neem oil kill ants? The answer is yes, they even kill many common pests and eat fungus that infects plants. But ants can also be highly problematic, with a few species feeding on the leaves themselves.

Ants can also kill beneficial insects such as lady bugs and use aphids as a form of livestock, protecting them from natural predators.

This not only makes ants a frustrating pest to most plant enthusiasts but can lead to ant infestations indoors.

There are several ways to deal with ants, but one option might surprise you: neem oil, one of the most popular and effective natural insect killers.

Extracted from the seeds of Azadirachta indica, raw neem oil contains Azadirachtin. This potent pesticide is non-toxic to humans and pets.

Check out this list of Bugs Neem Oil Kills

There’s a slight chance of killing an entire ant colony using neem oil, so use with care.

How Will Neem Oil Kill Ants

The Azadirachtin in neem oil has a chemical makeup much like certain insect hormones.

When ingested, it can cause an insect to stop eating, prevent egg-laying or advancing to the next growth stage, and impact fertility.

Research shows they excrete as much as 80% percent of the Azadirachtin. The rest stays in the insect’s body for an extended time.

When applied topically as clarified neem oil, there are only trace amounts of Azadirachtin. But the oil itself can clog the insects’ airways, suffocating them.

A good neem soil drench has limited effects on beneficial insects but can be devastating against harmful pests such as aphids and mealybugs.

As the plant’s roots absorb the Azadirachtin, the toxin becomes a systemic insecticide. It causes any insect that pierces or chews on the plants to ingest the chemical.

Except for a few species, most ants won’t directly harm your plant.

As a result, the soak won’t directly affect them if they o not ingest it- unless they come into direct contact with the toxin in the soil itself.

The situation changes if you have aphids.

When aphids pierce your plant, the sap pushes through their body to create a sticky fecal substance called honeydew.

Ants love aphid honeydew and will guard the aphids and harvest the honeydew to take back to their colony.

As a result, an ant that harvests from an aphid feeding on a neem drench-protected plant will ingest tiny amounts of Azadirachtin. He will then take it back to its colony, regurgitate it, and share it with other ants.

The workers and soldiers are sterile. But any Azadirachtin consumed by drones or the queen can halt the production of eggs. Any larvae fed Azadirachtin-laced honeydew can fail to reach adulthood.

Please note that results may vary greatly using a neem soak against ants since they’re ingesting it second-hand. The drench treatment won’t work for everyone.

Soil soaks last for up to 22 days. Reapply every three weeks as needed or once per month as a preventative.

Related: Getting Rid of Ants In The Garden

Neem-based foliar sprays use a further processed form of the oil. They have a very different application and effect.

These sprays use clarified hydrophobic neem oil, i.e., one that removes the Azadirachtin for use in other products.

The results appear much faster, even if they take longer to eliminate an infestation.

It clogs the airways of the target insect, causing it to suffocate. But it won’t transmit to an ant colony, even if the corpses themselves are.

This makes a great option to cut out ants that have infested your plant in response to an aphid or fungal problem without putting the otherwise beneficial colony at risk.

You can buy premade foliar sprays, but it’s usually better to make your own.

The clarified oil comes in a few different potency levels, generally ranging from .5 % to 2 % percent, although you can buy up to 3% percent.

The foliar spray will dissipate in 45 minutes to an hour, leaving no residue. Thus, it will need more than one treatment.

Tip: Use A Combination Attack

The reason neem oil has varying levels of success against ants is that they don’t directly ingest the oil. And colonies can have hundreds of workers, most of which you won’t even see.

Using a soak kills their food source, and a foliar spray can kill any ants that are present on the plant. But adding another great product will better help keep ants off of your plant.

Diatomaceous earth sprinkled around the plant’s base will lacerate the exoskeleton of any approaching ant. This will cause it to dehydrate to death.

Using this in conjunction with the neem soak and spray combo may be one of the most effective, human and pet-safe solutions available.