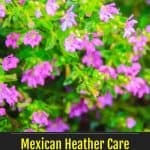 All the cultivars grow outdoors easily in the southern United States but require indoor cultivation in colder regions.

No matter where it grows, it brings a showy bloom of bright purple or lavender flowers during the summer.

Care and Maintenance of Mexican Heather

How Big Does Mexican Heather Get?

The trumpet-shaped Mexican heather flowers with six petals and green calyx tubes arrive in the summer.

The purple or lavender petals often attract butterflies and hummingbirds.

You’ll find the flowers in the leaf axils along stems. Mexican heather blooms profusely from summer until the first sign of frost.

The planting location for outdoor plants should receive several hours of direct sunlight in the afternoon and partial shade for part of the day.

Mexican heather is winter hardy in USDA hardiness zones 9 to 11.

In colder regions, move the plant indoors after the flowers drop.

Move the plant outside after the last threat of frost.

How Often Do You Water Mexican Heather Cuphea?

Water once or twice per week, ensuring the soil remains consistently moist.

Once established, the plant may no longer require frequent watering, and it even becomes tolerant to drought.

Use organic fertilizer to promote fuller, healthy growth. Another option is to add liquid fertilizer with each watering throughout the spring and summer.

Mexican heather adapts to a variety of soils, including sandy or loamy soil. But it likes a well-drained soil.

Add a layer of mulch around the base of the plant to increase water retention and prevent the spread of weeds around the root system.

Mulch also protects against colder temperatures, in the event of freezing conditions during the winter.

Occasional grooming helps produce denser growth. If the plant starts to appear leggy, trim back the branches by a third of its current height.

Groom the plant in the spring or fall, outside of the main growing season and the winter.

How To Propagate Mexican Heather Cuphea

Propagation of Cuphea is from seeds, cutting, or division.

To propagate from cuttings, cut a four to 6″ inch branch.

The main issue to watch for is an infestation of flea beetles.

The damage may eventually kill the plant.

They are more likely to appear when growing Mexican heather indoors.

If either pest appears, spray the plant with water. If the infestation becomes severe start applications of Neem oil sprays for plants.

The water should dislodge and drown the critters.

Misting the plant daily reduces the risk of pests in the first place.

Another issue to pay attention to is the spread of the plant.

In fact, it’s considered an invasive weed in Hawaii.

Avoid growing the plant in spots where it may spread easily or remove seedlings as they appear.

Use Cuphea hyssopifolia for ground cover, walkways, borders, or beds.

Plant Mexican heather along edging paths or grow as a container plant on patios and decks.