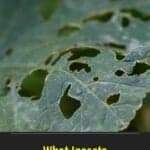 There are quite a few pests that attack plants. We are familiar with the common ones like aphids, spider mites, mealybugs, and thrips. But the nastier ones that strip leaves are in two categories: chewing and piercing.

Of these, chewing insect bugs are often referred to as defoliators. They will devour your plant’s leaves, completely denuding them if not treated.

There are many kinds of defoliators, but they have similar symptoms and remedies. Let’s take a moment and look at who they are, what they do, and how to get rid of them.

As mentioned, there are a lot of leaf-stripping insects out there. Most fall into a handful of varieties.

The asparagus beetle is unique in this list, whose larvae only feed on asparagus plants.

While this makes them easy to identify, they can kill your asparagus crop if not dealt with.

The majority of defoliators are caterpillars.

Smaller ones, sometimes called loopers or inchworms due to the way they move, are the larvae of small moths and can appear in large numbers. Larger caterpillars tend to do more damage but with smaller populations.

Meanwhile, sawflies are a type of wasp whose larvae are often mistaken for caterpillars. They feed primarily on dogwood, pine, rose, and willow species.

These pests can be a nuisance in small numbers but completely denude entire regions during population explosions.

Japanese beetles are a highly invasive species that looks like a copper or green ladybug that flies like a bee.

There are 47 species of ants that will defoliate your plants. They all belong to the genera Acromyrmex and Atta.

These ants don’t eat the leaves in the southern US through South America.

Instead, they cut off chunks weighing up to 20 times their body weight and carry them back to their nests. There the leaf chunks fuel the breeding of symbiotic fungi.

One of the largest genera of bees has more than 1500 individual species. Megachile harvest portions of leaves and flowers to line their nests. Although not all species do this.

At least one species, the alfalfa leafcutter (Megachile rotundata), is partially domesticated to aid in pollination.

What Damage Do Defoliators Cause?

All defoliators will munch on your leaves, but they can leave different types of chew marks. These make it easier to identify which pest you’re dealing with even if you don’t see them.

Caterpillars can do different types of damage, depending on the species.

Loopers often scallop the edges, while many larger caterpillars chew holes along the leaf’s interior and leave stems. A few – such as tomato hornworms – also burrow into unripe fruit.

Japanese beetles will chew on anything and everything, making them incredibly easy to identify.

In some cases, they will take small leaves in their entirety.

Meanwhile, leafcutter bee damage looks like someone took a large hole punch to the leaf. They leave the cut edges almost perfectly rounded.

Jagged cuts are usually caused by leafhoppers such as grasshoppers.

How to Control Leaf Stripping Pests?

There may be thousands of leaf-stripping insects out there, but they are all susceptible to the same remedies.

Here are the best options for dealing with any and every pest mentioned.

Insecticides can provide fast results but kill indiscriminately. This reduces the population of beneficial insects such as ladybugs and bees.

Frequent use can also result in superbugs, so use this option with care.

It’s often more time and cost-effective to pluck larger pests from your plant by hand, especially grasshoppers and big caterpillars.

Note that you can safely cook and eat most grasshopper species if hand-picked or killed with neem. They are a food staple throughout most of the world (with the US being one of the few countries that don’t include insects in their mainstream diet).

Birds, lacewings, ladybugs, and parasitic wasps are your first line of defense against most of these pests, except for ants. They will defend themselves.

Neem will kill just about everything on this list without harming beneficial insects.

Foliar spray neem will suffocate the pest on contact but dissipates in 45 minutes to 1 hour.

Applying at dusk or dawn makes it safe for use outdoors, as beneficial insects are least active at these times.

Meanwhile, neem soil soaks are a systemic insecticide that protects the plant for up to 22 days. They ingest it through chewing or piercing habits. It is perfectly safe around beneficial insects (and is non-toxic to humans and pets if you treat food crops).

It kills more slowly, cutting off the appetite, interfering with growth stages, and even causing sterility in many species.

Apply the soak every 14 to 21 days as a safe preventative that won’t create superbugs.