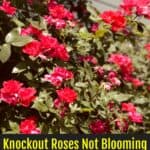 Roses have always been finicky. For some people with especially green thumbs, they seem to grow themselves, but for most, roses can have a personality as prickly as their stems.

All of that seemed to change with the development of the Knock-Out Rose, a self-cleaning, low-maintenance cultivar family that took the world by storm.

With new Knockout rose options coming out every few years, a lot of rose lovers buy these plants thinking all of their problems will be solved.

Unfortunately, these are still roses and have their own pests and diseases, as well as common issues such as leaf yellowing, root rot, and – to many peoples’ surprise – issues with blooming.

Why are My Knockout Roses not Blooming?

There is a wide range of environmental and health reasons that can affect a KnockOut Rose’s ability to bloom.

Here are some of the most common reasons and what you can do to remedy them.

Roses have evolved thorns to help prevent animals from snacking on them, but if you’ve ever tasted rose hips, you’ll know how wonderful a rose’s blooms and fruit are.

Thus, don’t be too surprised if the lack of blooms were because rabbits, deer, or even squirrels have been hard at work.

Deer and related species will eat new buds, then return and snack on the plant itself.

Meanwhile, squirrels seem to enjoy biting the buds off and leaving them on the ground.

Fencing is perhaps the easiest way to protect your roses from these little pests, but you can also spray them with essential oils that will make critters think twice about putting their sensitive noses too close.

It’s important not to overwater your plants, but sometimes caution can lead to underwatering instead.

This is especially true during periods of hot or dry weather, where the soil dries faster than you’ve planned for.

Dehydration can put your plant in shock, lead to withering leaves, and retard the plant’s efforts to bloom.

To diagnose and remedy, simply stick your finger in the soil and see if it comes out dry.

If it does, give your plant some water.

You may also wish to add some form of mulch, such as pine needles or bark, to help protect the soil from drying out too fast.

One of the things so many people get wrong about Knockout Roses is the fact that they’re more resistant to disease but not immune.

Infections such as black spots on roses, powdery mildew, root rot, and rust can all shock your plant, causing it to pause its blooming process in an effort to address the infection.

Neem soil soaks will help boost your plant’s immune system against any disease (or disease carrier) that breaks through the plant’s surface.

To combat root rot, be sure to water your Knockout Roses properly, and augmenting with neem soil soaks or neem cakes has been known to help combat the early stages of root rot.

Finally, prune away any diseased leaves or limbs using sterile, sharp shears, and be careful not to let the diseased parts touch healthy areas as you remove them.

Sometimes you can have too much of a good thing, and this is certainly true of flowers.

Those blooms require a lot of energy to produce, and your roses don’t exactly get to look forward to bacon for breakfast afterward.

Deadheading is a great way to help your plant focus on new blooms by getting rid of the spent ones.

Be sure to use sharp, sterile shears and cut just below the spent head.

Some insects, such as thrips, will actually attack the buds and new growth directly, while others drain the sap from the bush’s leaves and stems.

The single easiest method to get rid of these pests is using a neem soil soak, which will interrupt their appetites and reproductive cycles, causing an infestation to become sterile and die out.

Neem foliar sprays suffocate the pests on contact, but will not kill their eggs, so you will need to do multiple treatments. Insecticidal soap sprays are also an option.

Finally, natural predators, such as lacewings, ladybugs, and parasitic wasps are excellent allies and can be ordered online.

Just be sure to do some complimentary planting with flowers or herbs that attract them.

Once again, all plants need energy to flower, and photosynthesis is one of the ways they get that energy.

Unfortunately, photosynthesis isn’t as efficient as you were told in school, and even a small lack of lighting can have huge effects.

Depending on your region, Knockout Rose shrubs need exposure to the sun at different times.

As a general rule, ensure it’s getting at least 6 to 8 hours of full sun per day. More shade fewer blooms.

In cooler climates, this can be during midday, but in harsher regions, it should be in the morning or evening when the sun’s power is more diffused by the atmosphere’s curvature.

Finally, we get to a case of “too much of a good thing”.

Your Knock Out rose bush needs regular fertilization, but using a fertilizer with too much nitrogen can have consequences.

Nitrogen encourages your bush to grow, and excess will convince it to focus on foliage, giving you a thicker, fuller bush at the cost of blooms.

Another side effect of using too much nitrogen is a condition called “crooked neck” where the buds will form at a sometimes drastic angle.

These affected buds may fail to bloom or result in malformed flowers.

Solving this issue is generally easy, but may require a soil change if you’ve been overfeeding for a while.

Simply find an appropriate Knockout Rose fertilizer, preferably a 6-12-6 NPK or balanced formula to use.

Also, keep in mind that these roses don’t need a lot of fertilizer and some growers skip feeding altogether if using compost, so adjust the doses upwards or downwards to suit an individual rose bush’s need.