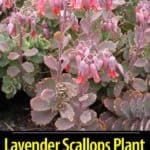 Kalanchoe fedtschenkoi is a low-growing perennial succulent with pretty flowers and compact foliage. The name of the plant honors botanist Boris Fedtschenkoi and is now known as Bryophyllum fedtschenkoi.

Native to Madagascar, the Kalanchoe fedtschenkoi [kal-un-KOH-ee, fed-tscheng-koh-eye] belongs to the family Crassulaceae and the genus Bryophyllum. Since its introduction to North America, it’s established itself in parts of the southern United States.

It’s a relatively easy succulent to grow as a houseplant, and it makes a great ground cover in suitable climates.

You may hear it called by its common name including:

It features stems which spread out from the root along the ground, forming large colonies of thick succulent leaves.

The blue-green leaves have cream-colored variegation along scalloped edges.

The edges may turn red or pink under strong sunlight or drought conditions.

The fleshy bluish-green foliage is often darker green toward the center and trimmed with lavender.

Each leaf may reach up to 2″ inches and feature two to eight teeth around the edges.

The bryophyllum fedtschenkoi stems are smooth and bendable. When the stems reach the ground, they may take root and grow new plants.

The loose clusters of flowers are often reddish-brown and only reach about 3/4-inch in size. Each flower has a short calyx and a slightly longer corolla.

Bryophyllum fedtschenkoi is winter hardy in (USDA Zones) hardiness zone 9b or warmer.

Outside of these areas, it’s typically grown indoors as a houseplant. It can tolerate temperatures below freezing for short periods. If temperatures regularly drop below 25° degrees Fahrenheit (-4° C), bring it indoors for the winter.

The plant needs lots of intense sunlight (preferably full sun), whether grown indoors or outside, especially during the summer. When grown inside, place it near a south-facing or west-facing window.

Kalanchoe fedtschenkoi does not require grooming.

How to Propagate Lavender Scallops

This is one of the easiest plants to propagate from:

If grown in the ground, the stems may take root and grow new plants.

To propagate by division or with a leaf cutting, prepare a small pot with a cactus mix or add sand to regular potting soil to achieve the right consistency.

When dividing the plant, separate at the base, using caution to avoid damaging the leaves.

Allow the divided plant to dry overnight before placing it in its new home.

It’s also possible to collect seeds from the flowers after they bloom.

Pests or Diseases Of Kalanchoe Stonecrop

Lavender scallops do not suffer from too many threats, but may occasionally attract mealy bugs or scale insects.

When the pests first appear, remove them with sprays of water or pick them off individually. If the infestation grows, treat with an insecticide.

Another potential issue is the toxicity of the plant. Parts of the plant are poisonous to animals and may cause irritation to humans when ingested.

Keep it away from small children, cats, and dogs.

Fedtschenkoi makes a great houseplant. Grow it near a windowsill where it can get plenty of bright light throughout the day. In warm climates, consider growing it in a garden.

The low-growing lavender scallops can grow under the shade of taller plants if the plants don’t completely cut off the sunlight.