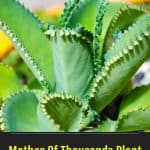 Is the Mother of Thousands poisonous? This popular plant Is part of the Kalanchoe genus. It is known for its unique tear-shaped or oblong green leaves that bear countless baby plantlets along the edges is a succulent plant from the Crassulaceae or orpine family.

The Mother of Thousands is native to the Androhibolava Mountains and Fiherenana River valley in southwest Madagascar but has been introduced to many tropical and subtropical regions of the world.

Some of the areas where it is widely grown include Florida, Hawaii, Puerto Rico, Australia, and some parts of the Canary Islands.

It is called the mother of thousands because each of its leaves produces hundreds of offspring though its epiphyllous buds but its scientific name is Kalanchoe diagremontiana.

These buds quickly form roots wherever they land after falling off from the mother plant and grow into new plants.

The botanical name of the plant is Bryophyllum daigremontianum.

However, it is also sometimes referred to as Kalanchoe daigremontiana or Kalanchoe delagoensis.

In addition to the mother of thousands, the plant is also known with the common names of:

The plant is widely grown as a houseplant due to its undemanding nature.

It is hardy, drought-tolerant, and can even tolerate full sun and very hot temperatures, once established.

However, for best results, it is recommended to grow a mother of thousands in cacti potting mix and keep it out of the direct sunlight but provide bright light.

If you use standard potting soil, add some sand or perlite to improve drainage.

The plant doesn’t always flower, but when it does, the blooming starts at the beginning of a warm season.

The plant is hardy to the United States hardiness zones 9 to 11.

Are Mother of Thousands Plants Poisonous or Toxic?

Although the thousands mother is widely grown as a houseplant, you need to be very careful while growing it, especially if you have children or pets in the house.

The plant contains daigremontianin, which is a cardiac glycoside – a highly toxic steroid from the category of bufadienolides known for causing cardiac poisoning and cotyledonous.

Cotyledonous is a type of intoxication which is caused by repeated smaller doses of the toxin.

It has been found to affect the muscular and nervous systems of small animals.

Crassulaceae species are one of the major sources of this toxin, which according to an estimate, is responsible for 33% of all cattle deaths caused due to plant poisoning in South Africa.

The plant is known to be poisonous to humans, household pets, birds, and livestock.

What Parts of the Mother of Thousands Are Poisonous or Toxic?

All parts of the Kalanchoe plant are poisonous, including the tiny plantlets on the edges of the leaves, and are known for causing toxicity upon ingestion.

The level of toxicity, however, usually ranges from mild to moderate.

But, you have to be careful and not only keep the plant out of children’s and pets’ reach but also immediately remove the small plantlets which frequently fall off the plant.

The milky sap secreted from the injured or broken stems of the main plant also contains the toxic element.

Therefore, it is recommended to be careful and wear protective gear when working with the plant.

Ingestion of large amounts of the plant, however, can lead to some serious health issues, like heart palpitations and changes in heart rate.

On rare occasions, severe toxicity can lead to tremors and seizures.

If ingested in large amounts, the mother of thousands is fatal, particularly for small animals and children.

While the sap has not been found to cause any problems upon coming in contact with the skin, it is better to be careful, especially if you have sensitive skin. It may cause skin irritation or allergy.

How to Protect Yourself While Handling Mother of Thousands

To prevent getting in touch with the poisonous milky sap of the Mother of Thousands, it is recommended to wear disposable protective gloves when working with it.

Discard the gloves afterward and wash your hands properly.

To be even more careful, wear full clothes and do not touch your face, or any other part of the body, while you are working with a mother of millions.

Lastly, to prevent accidental ingestion of the plant by children, pets, birds, or any other animal, keep it indoors or a greenhouse.

However, when kept indoors, make sure to keep it at a higher place, away from the reach of children and pets.

Also, regularly clean the surroundings of the plant as it tends to drop the plantlets quite frequently.