Polemonium caeruleum [po-le-MOH-ne-um, see-ROO-lee-um] is a perennial flowering plant species from the family Polemoniaceae. Other plants in the family include annual Phlox and Cobaea scandens.

Native to temperate regions of Europe and Asia where it is mainly seen growing in damp woodlands, grasslands, and meadows.

The plant is commonly referred to as Jacob’s ladder due to the unique, somewhat ladder-like arrangement of its leaves. 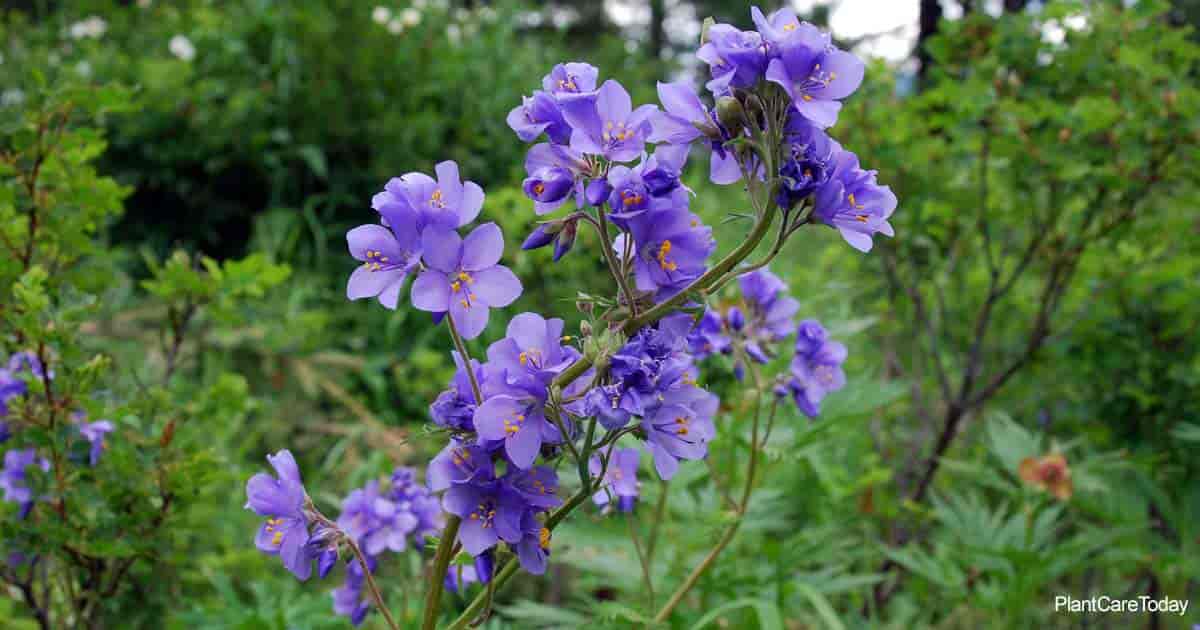 The pattern of leaf formation is called pinnate and is quite uncommon among flowering plants.

However, the plant’s real attraction and the reason for its popularity are not the leaves or their unique arrangement, but its vibrant flowers.

In addition to Jacob’s ladder, the plant is also known by the following common names:

Displaying beautiful flowers and a unique arrangement of leaves, Greek valerian is an upright, clump-forming, and hardy plant.

It typically grows up to 18″ – 24″ inches in height and features almost similar sized spread.

Sometimes, however, the plant grows past 35″ inches in height.

While the plant naturally grows in moist woods and shady forests, it tolerates and survives in dry and sunny conditions as well.

In addition to its beautiful flowers, the hardiness and adaptability of Jacob’s ladder plant have made it a gardener’s favorite, all over the world.

In late spring or early summer, the slender stalks of the plant are seen rising up from the green foliage with clusters of bell-shaped blue flowers at the top.

The flowers are generally in shades of purple, lavender, and blue with yellow stamens, but some cultivars of Polemonium caeruleum also produce pink, yellow, and white flowers.

The initial bloom time typically lasts for only two to four weeks.

However, experts recommend deadheading the faded or dead flowers after the first bloom to encourage repeat blooming.

Greek valerian prefers partial shade and may develop sunburn and scorch if it receives too much of full sun.

However, the level of sunlight tolerance varies across different cultivars; varieties of the make-bate plant with dark green leaves are generally more tolerant of sunlight than those with variegated leaves.

On the other hand, it can tolerate full shade.

The perennial plant dies every year in autumn, but since it is hardy, it starts producing new growth again as the weather starts to get a little warm, in spring.

However, make sure to not water too much; the soil should be moist, but not wet.

The right amount of watering ensures a longer blooming period.

Feed the plant with a balanced fertilizer in early spring, when the new growth starts to emerge, and then again after deadheading.

Alternatively, apply a layer of compost around the plant, a few times around the year.

While the plant prefers moist soil, it cannot tolerate wet or waterlogged soil.

It doesn’t have very specific pH requirements but performs best in the soil with neutral pH within the range of 6.2 to 7.0.

Charity plant requires minimal reason and this is another reason for its popularity as a garden plant.

All you have to do to encourage the plant to rebloom is to deadhead the plant and cut the flower stalks back to the base of the plant.

Remove the tattered foliage for a clean look; it will be replaced with new growth.

How To Propagate Polemonium Caeruleum

While Jacob’s ladder plants self-seed to spread, they are propagated through plant divisions or grown from seeds.

Mature Greek valerian plants need to be divided every two to four years otherwise they start to die from the centers.

To propagate through plant divisions:

If you are sowing the seeds indoors, make sure to do it either in mid-summer or two months after the end of frost season, so they’re able to be transplanted outdoors in fall or spring respectively.

Greek valerian plants may get affected by powdery mildew and fungal leaf spots.

The fungal disease is sometimes the result of very high humidity.

Slugs, leaf miners, and groundhogs will also cause damage to the plant.

The scent of Jacob’s ladder plant, particularly of the young plants, attracts cats and they chew and/or roll on them. However, the plant is deer resistant.

As mentioned above, Polemonium is a highly popular garden plant due to its striking flowers.

From backyards to cottage gardens and rock gardens, the charity plant is widely grown everywhere and always becomes the center of attention due to its vibrant flower color.

While this is the only use of Jacob’s ladder plant, in the modern world, it was used for medicinal purposes in ancient Greece.