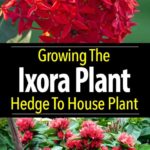 Ixora plants have been used in the landscape and ornamental plant of South and Central Florida for decades.

Its also graduated for use as a patio, and houseplant. Many have seen it used as a formal hedge in southern Florida.

Only a few of the approximately 400 species are grown for use in the landscape.

Native to China and southern Asia, the tropical evergreen flowering Ixora is a medium-sized evergreen shrub, with glossy leaves.

The tropical plant produces small star-shaped flowers from red, pink, orange and yellow, in clusters at the stem tips.

Some of the ixoras (icks-OR-ah) are among the most glamorous of flowering plants for indoor culture.

Visitors to south Florida may always have thought that these brilliant blooms were a monopoly of that part of the state. If they considered only the common Ixora once widely used for hedges, they would be right.

However, some plants – especially dwarf Ixora plants – do not have the high light requirements of coccinea and which make coccinea difficult to handle indoors in a container.

For easy growth and abundance of blooms, there are the species Ixora chinensis sometimes called the Chinese Ixora with bright scarlet flowers and Ixora acuminata with snow white fragrant flowers.

Also available is a dwarf Ixora plant perfect for growing in pots.

Ixoras like a lot of water. They are woody plants and develop a strenuous root system which must be satisfied with adequate moisture.

They are acid-loving plants. They grow best in a acidic, rich, well-drained soil. If the soil pH is or becomes alkaline, leaves turn yellow and then need an application or two of a chelated iron supplement for plants.

Since these are heavy-blooming plants, feed with one of the complete liquid foliar fertilizers every four to six weeks from spring through fall.

Temperatures are in the ’70s in the summer and not below 60° degrees Fahrenheit in the winter indoors.

Ixora’s blooms are spectacular and rewarding, far out of proportion to the little care they demand.

Do not overpot the Ixora. Plant in a small 5 to 6 inch pot, where the plant can be kept for two or three years. After that, these container plants can be transferred to a eight-inch pot where they can be kept indefinitely.

By cutting the flowers for table use and stems for propagation, plants are held to a manageable size.

White is probably the most uncommon form of ixora. Unlike the other two mentioned, Ixora acuminata is strictly seasonal in its bloom – generally May-June in Florida, whether used as a house plant or in the garden.

This gets to be a large flowering shrub, but can be kept to four or five feet by pruning. Leaves are large and lush. Flower heads are huge – to some five inches across. White, combined with a pleasant fragrance, makes this a sought-after species for any collection.

In theory, established varieties will have three crops of flowers a year; in practice, the crops are so long-lasting, and the rest-period so brief, the plants are almost constantly in bloom, and they begin flowering when very small.

The most commonly seen type has – scarlet flowers, and is known as Flame-of-the-Woods; there is yellow-flowered variety called yellow ixora, and other forms with blossoms in pure white and various shades of pink, orange, and red.

This includes these Ixora plants:

All varieties are considered either an Ixora Bush, Ixora Hedge, or Ixora Shrub.

The white-flowered sorts are often fragrant. The blossoms are extremely showy, having long, slender-tubed corollas with four (sometimes five) wide-spread lobes, and borne in dense corymbs or heads.

At this point, you are wondering what problems there are since no plant is perfect. Sooty mold is one problem I remember as a kid. Aphids will attack ixoras and are responsible for covering leaves with sooty mold.

Fortunately, aphids are easy to control with malathion, or sprays of organic neem oil insecticide or insecticidal soap.

Edges of its foliage turn brown when exposed to direct sunlight. Protect the plant by moving to a shadier spot especially from mid-day full sun.

Leaves will often turn yellow and drop off when the plant is being over-watered. Allow the soil to dry out and adjust watering to keep soil moist but not wet.

Leaves may also appear anemic and yellowed and in need of an application of chelated iron.

If the plant is not growing check closely for spider mites on the underside of leaves.

Ixora chinensis has many virtues. It does not need sun; in fact, it resents it. It starts to flower when only ten to 12″ inches high. It continues to flower on each new, short flush of growth. This means almost continuous, year-round flowering.

Growth is slow so that the plant does not quickly get out of bounds and useless for indoor decoration. It propagates readily from tip cuttings taken in summer.

As the plants increase in size, so do the flower heads, which can reach a diameter of nearly four inches. They last for weeks in good condition.

One of the first well known hybrids used indoors was Ixora ‘Henry Morat’ made in 1943. A pink hybrid which was delicately scented. It was a cross between Ixora accuminata x Ixora coccinea.

It was a lovely shell pink. Flower heads were not quite so compact as those of Ixora chinensis but formed almost continuously. The color was unusual at the time among Ixoras for it is definite and constant. Some ixoras open pink, then turn to varying shades of coral.

Ixora In The Landscape

The most popular ixora for landscape use would have to be the popular Hybrid called Ixora “Nora Grant.”

“Nora Grant” produces attractive pink flower clusters throughout the year. With the plant reaching a height of about 4 feet.

When buying Ixora make sure the leaves are not yellow, dried out, damaged or brown. Purchase before Ixora flowers fully develop as they may drop when moved.

The most difficult part of growing Ixora is giving the plant a good acid soil, heat and high humidity.

Keep the plant in shape by pruning and to keep growth compact.

Can be used outdoors as a potted specimen on a patio or deck where it gets a light shade with plenty of light.

The Ixora is known by a few common names – Flame of the Woods and Jungle Flame.