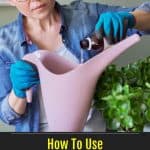 There are a lot of wonderful substances in your home that you would never think are so useful.

One of these, hydrogen peroxide (H²O²) is commonly used as a gargle, hair bleach, disinfectant, and in ear wax removal; but that’s not all it can do.

Due to its chemical similarity to water, hydrogen peroxide solution is one of the safest chemicals you can use in the garden to combat a wide range of problems.

In fact, hydrogen peroxide is found naturally in rainwater and serves as a natural fungicide, insect repellent, and weed killer.

When a small amount is added to a cup of water, it creates a much healthier drink for your houseplants than tap water.

The hydrogen peroxide you find at a drug store is already diluted, but you will still need to mix a lower concentration for treating a sick or healthy plant.

Root rot usually happens because a plant has been overwatered without proper drainage.

Phytophthora root rot can affect a wide range of garden and container plants, but most commonly affects potatoes and tomatoes.

It can survive for years in the soil, whether or not any plants are present.

How Do You Treat Root Rot With Hydrogen Peroxide?

Root rot is most commonly caused by poor soil aeration or over watering.

Mix one part 3% percent hydrogen peroxide with two parts water and carefully pour it over the plant’s root system with a watering can or spray bottle.

This will kill off the bacteria which causes root rot.

Additionally, hydrogen peroxide will break down once absorbed in the soil, releasing extra oxygen and encouraging root growth by creating more space in the soil.

You may use this same mixture to disinfect potting mix or soil prior to planting.

Place the soil into a clean, disinfected container and add the peroxide.

Water two to three times over the course of a week and the soil or mix will be ready for planting.

Is Hydrogen Peroxide Good For Plants?

There are so many benefits of hydrogen peroxide related to your plants it’s a wonder so many people have never heard about them.

Add two teaspoons of 35% percent hydrogen peroxide (food grade) to a gallon of water and use this mix alternately with regular water to encourage healthier plant growth, especially with indoor plants that have no access to rainwater.

When working with seeds from another garden, place the seeds in a small watertight container and soak for 4 hours in 3% percent hydrogen peroxide to kill any harmful bacteria, then rinse thoroughly and allow them to dry on a towel.

You can further soak the seeds in a mix of one teaspoon hydrogen peroxide and one cup of water for a few minutes immediately before germinating for a quick growth boost.

1% percent hydrogen peroxide will repel a range of garden pests, from aphids to fungus gnats, killing their eggs in the process without harming beneficial insects.

This natural form of pest control is doubly efficient when used as a foliar spray due to its anti-fungal properties.

Be sure to keep the peroxide in an opaque bottle, as the lights used for hydroponics will cause the peroxide to break down.

Hydrogen peroxide is extremely effective against fungal growths, especially mold, mildew, and residues; but the treatment method might sound counterproductive.

Mix a solution of one part peroxide to 32 oz water and inundate the plant until it begins pouring out of the container’s bottom or floods the surface.

This allows the peroxide to reach and kill the fungal infection and prevent its return.

Avoid watering the plant until the soil has dried almost completely.