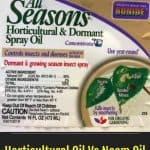 In a world where chemical pesticides have become the norm, it’s hard to find suitable alternatives. Chemical solutions with their toxic residue have been known to cause birth defects, illness, and pests that survive them breed into superbugs.

This has led to a growing number of plant lovers seeking out natural remedies. While there are plenty of home remedies and all-natural commercial options, none of them are perfect.

However, there are a few good options out there, such as horticultural oil, neem oil for plants, and insecticidal soap.

Knowing the difference between this narrow range of options and when to use them can lead to a much safer, healthier relationship between your plants and family.

Here we’ll take a look at two of the best natural remedies, what they are, and when to use them.

What Is The Difference Between Horticultural Oil vs Neem Oil?

Two of the most popular natural solutions are horticultural oil and neem oil.

While both have similar effects and uses, some important differences make one better than the other in certain situations.

What Is Horticultural Oil?

Horticultural oil products are usually made of mineral oil but may also have a cottonseed or soybean oil base.

An emulsifier is added so it can be mixed with water.

Other insecticidal ingredients might be added to increase effectiveness.

The oil works by clogging an insect’s breathing holes, causing it to suffocate.

Note that the term “superior oil” was originally a more refined version of horticultural oil but is now the standard for commercial products.

There are two major types of horticultural oil:

Dormant oils are primarily used during the winter months (on fruit trees) and were originally much thicker.

All-season oils (sometimes called summer oil) are diluted further diluted to be easier to use during the growing season.

When To Use Horticultural Oil

Despite the name, all-season oils can prove risky on ornamental plants with direct exposure to sunlight, as the oil may cause sunburn.

However, horticultural oil is generally more gentle on succulents than neem oil, making them a good choice for treating this type of plant.

It’s easier to use the all-season than the dormant, which must be applied when the leaves (plant foliage) are about to bud.

In both cases, horticultural oil works best against bugs when they’re still young and soft-bodied.

There are several conditions in which horticultural oil loses its effectiveness or can even become harmful to plants.

What Is Neem Oil?

Neem oil is the natural extract of the Azadirachta indica tree.

Clarified hydrophobic neem oil has most of the Azadirachtin removed, leaving trace amounts of .5 to 3% percent.

In both cases, edible plants may be harvested 24 hours after application.

How Neem oil works depends on how it’s applied.

Raw neem works best as a soil soak, where it becomes a systemic insecticide that remains potent up to 22 days.

When ingested, it can affect an insect’s growth cycle, reproductive abilities, and ability to feed.

Meanwhile, clarified neem works best as a foliar spray and dissipates after 45 minutes to 1 hour.

This form works in the same way as horticultural oil, suffocating the insects by clogging their airways.

When To Use Neem Oil

Clarified neem oil must be applied at dusk or dawn, as it can harm beneficial bugs that come into contact with it.

Both neem soil soaks and neem foliar sprays are usable as a preventative, by applying the former once every three weeks and the latter every two weeks.

Always test neem on a small part of the plant 24 hours before full treatment to ensure the plant isn’t sensitive.

Use caution on plants with known sensitivity, such as:

Which Is Better: Horticultural Oil vs Neem Oil?

There’s no solid answer to this question of horticultural oil vs neem oil, as there are occasions when one is better than the other.

In general, it’s best to use horticultural oil right before the growing season or when you first spot an infestation.

Neem oil works better as a preventative or for established infestations.

In addition, horticultural oil tends to work better against fungus gnats, whiteflies, and other small fliers, while neem oil is better at handling adult scale insects and mites.

Finally, some plants may be more sensitive to one oil over another, so neither is a catch-all remedy.

Try to incorporate both into your plant care routines, taking advantage of the strengths of each to cover a wider range of issues.

In some instances, you can also blend the two with insecticidal soap for even more effectiveness.

Just be sure to remember the weaknesses of each and avoid using a blend in situations where one ingredient of the blend is compromised.